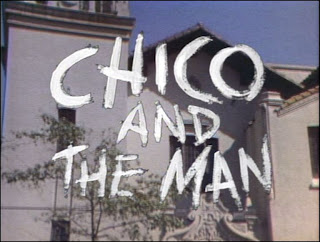 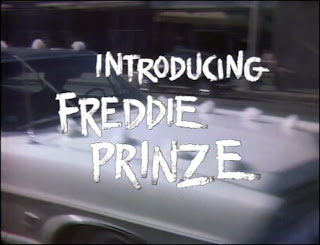 Chico (Freddie Prinze) was the fun loving Hispanic who charmed his way into the life of Ed Brown (Jack Albertson), an old bigoted curmudgeon who didn’t like the uprise of the ethnic population in his neighborhood. A drunk and a loner, Ed crankily put up with Chico, a kid he hated to admit he liked. Well, it’s not hard to like Chico, the sweet natured entrepreneur was determined to get old Ed some business into the rundown garage. The show focused on Chico and his ying/yang partnership with Ed, but there were lots of other characters filtering in and out of Ed and Chico’s life, including Louie (Scatman Crothers) and Della (Della Reese), plus all the quirky folks who made a pit stop in Ed’s garage. And, of course, hilarity ensued. 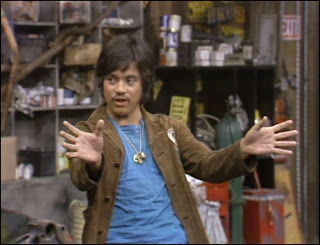 Prinze in his first scene in the pilot
I always thought Chico and the Man was created to showcase Freddie’s phenomenal standup act, but Prinze was actually up against four other actors for the part, including Isaac Ruiz who played Mando in several episodes. The final decision came to a meeting with Jack Albertson who was then starring in a stage production of the Sunshine Boys. The show’s creator, James Komack was interested in who Albertson had the most chemistry with. And a legend was born.

There was some controversy from the Mexican American community surrounding the casting of Prinze who was Puerto Rican. Prinze’s mother said in a book she wrote about her son, called The Freddie Prinze Story, that he would receive threats from angry TV viewers. Prinze responded in a 1975 interview with the Palm Beach Post with, “The feelings are the same. Spick means the same thing in New York as it does in Los Angeles. The pain is the same.” He conceded in the same interview, “I don’t think it’s the majority making the fuss. It’s a few radicals.” Eventually, the network bent and wrote in that Chico’s father was Puerto Rican. Regardless of the controversy, Chico and the Man was an instant hit, and Prinze was what they refer to in Hollywood as an overnight success. 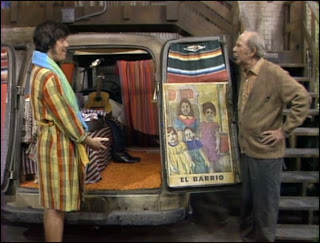 Chico shows off his new digs
Many sitcoms of the 70s and 80s were far less sophisticated than what we see now. While people complain about the current state of the half hour comedy, those unaccustomed to the stage-like productions of yesteryear are sure to detest the format. It’s a shame too, because the simple sets and stories were a true showcase for the actors. Everything relied on presence and delivery and the comedy was derived from the actors’ ability to grab your interest. Freddie Prinze was a natural and he hit it right out of the ballpark in the pilot, which aired on September 13th, 1974 on NBC. Ed is introduced as a real cranky old bastard and it’s fun to watch Prinze warm the old coot’s heart. This of course would become the crux of the series, but it’s apparent here why the Man isn’t as keen on letting Chico go as he would like everyone to believe he is. 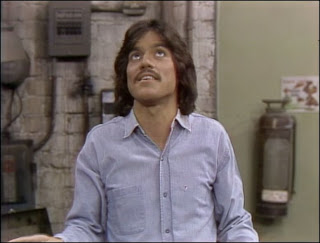 Chico does his own bargaining with God
The series ran fairly smoothly for three seasons while Prinze was experimenting with drugs and going deeper down the rabbit hole of depression. According to his mother, Prinze was lonely and not meant for the bright lights of Hollywood, but he would reveal to a psychologist shortly before his death about his own childhood sadness and how he began experimenting with drugs at a younger age than his mom talks about. He also confesses to an earlier suicide attempt (here’s a link to the article in People Magazine). Even now, with all I’ve learned about Prinze’s darker side, I find it hard to believe that what I saw on screen was so different from the man himself. By all accounts, Prinze was a good guy and well loved, but he obviously didn’t know how to take that love in, and all of that sadness was completely hidden on the series. Prinze actually taped his last episode just hours before his death. The episode was called Ed Talks to God and it aired on March 4th, 1977, about five weeks after Prinze’s death. This episode is especially poignant because it revolves around Ed’s birthday and many comments are made about how Ed should appreciate getting to the age he has. Prinze looks especially thin and his delivery does seem to be a bit off, but of course this is all in hindsight. Knowing he was so close to the end, makes it especially difficult to watch. 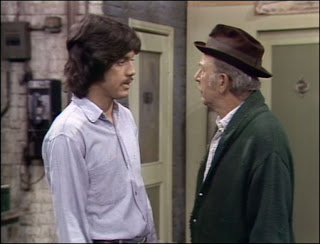 The chemistry between Albertson and Prinze was undeniable
For three magical seasons, Prinze brought the gift of laughter to just about everyone who ever watched an episode of Chico and the Man, and he shocked the country with his death. At Prinze’s funeral, Jack Albertson gave a eulogy which he ended with: “We are bound together, this family, not in a temporary chill of death, but in the everlasting warmth of his humanity and his humor. Let us not mourn his death, rather, let us celebrate his life. In the years to come, in the days and the years, this moment will have passed and we’ll see Freddie again, we will hear him, we will think of our brother and we will smile again and we will laugh again, and we will be warm again.” 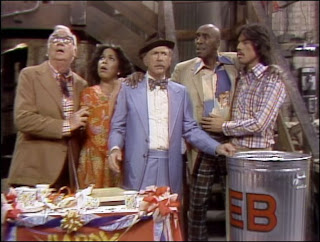 The last time the gang appeared together

Six episodes of Chico and the Man are available on DVD at Amazon.

The series tried to continue without Prinze, and 12 year old Gabriel Melgar was brought in as a replacement. While I remember liking Melgar, who played Raul, the show was destined to bomb without Prinze. However, there were many poignant moments on the show, like when Ed busts up Chico's guitar in a fit of anger over his death. The following clips aptly capture the anger and sadness that not only Ed felt regarding the heavy loss of Chico, but also the frustation the fans endured as well. The fact that these scenes still resonate deeply proves the depth of the sense of loss we all shared when Freddie Prinze died.

Thanks for celebrating his life. This is a great reminder of a classic sitcom.

I have a confession to make...I don't think I've ever seen a single episode of this show. Your stunning and well-written tribute makes me want to check it out!

Scatman Crothers! I'll always remember him for The Shining...and was Jack Albertson the grandfather in Willy Wonka and the Chocolate Factory?

Thanks guys for reading and commenting!

Pam, yes Jack Albertson was in Willy Wonka, and now that I've been re-watching Chico, I've decided he's about the cutest old man I've ever seen (besides my father!)!

I never watched it either but this was a nice tribute. How did they explain Chico's death on the sitcom?

Klee, I can't remember much about the post-Prinze years, although I'm sure I've seen most of the episodes. I believe they say Chico has died (which is noted in the clips I posted), but they never say how... I guess it was probably best that way, since they were having a character die so young, and because Prinze's death was so infamous. I would love to rewatch those episodes myself.

And glad you stopped by and commented Klee...

My 3 sisters and I were all so upset over Freddies death that we never watched the show afterwards, for one because we didn't want to, and for another because when it would come on and we'd hear the song we'd all start crying again and our Mother would change the channel. I haven't seen the ones with the little kid. Freddies death was the first time I was ever exposed to that sort pain, pain of a lost "loved" one, even though I didn't even know him, had never met him, it still hurt so much. Even now reading your page I'm crying.

He was such a talented and beautiful person and he opened the door for many other people of the Hispanic race in television and other media. Freddie Prinze truly made a mark in this world.

Thank you very much for this page.

Reading your comment really moved me and made my day. I agree that Freddie was a wonderful and unforgettable presence in the world. And I also know about the connections we make with performers we've never met. I'm so happy that his legacy lives and that he is still loved by so many.