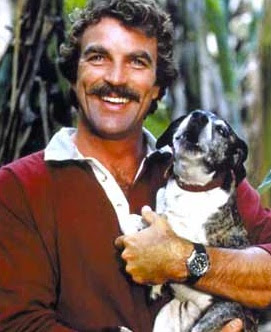 This beautiful and wonderful actor has been such a mainstay in my life. As a huge Magnum P.I. nut, I can truly say I only appreciate the show more and more with each viewing. Thomas Magnum was machismo-laden charisma at its best! So, it's truly surprising that when he starred in a pilot called Bunco (1977) alongside Robert Urich some critics felt both actors lacked leading man qualities! Wow, talk about missing the mark completely! Of course, Selleck is still ruling the airwaves with the hit show Blue Bloods and another Jesse Stone TVM in the works. They say you get better with age, and that's certainly true with Selleck, one of the most likable actors of the small screen.

Check out Selleck's auspicious beginnings in this commercial:

And check out this post I wrote for Tom Selleck's 65th birthday, which features some pictures from Tom's first TVM, The Movie Murderer.
Posted by Amanda By Night at 12:05 PM

Hey Amanda, what happened to retroslashers.net? Do you know?

Hi Dylan! Thanks for stopping by and I'm glad you like the blog!

Retro Slashers was hit with a huge virus and John is working on everything, but it's been a fairly slow process. He's on it though and I'm sure everything will be back to normal soon!

I'm guessing you are on the facebook page for us? If not, look us up. You can keep up to date there.

Magnum was always one of my favorite shows. I still have my 2 Tom Selleck posters but only part of the 1985 Magnum calendar. I love that photo of him with that cute dog and the commercial had me laughing. Thanks for posting these.

Wow, that commercial is awesome - so many young recognizable faces (Teri Garr, Penny Marshall, and a couple other character actors whose names escape me at the moment). Cool!

Hi LaraAnn, I thought I left a comment for you, but I don't see it. I think I mostly said I was jealous of your Magnum posters!!! I want them!

And the blonde girl in the office is Teri Garr!