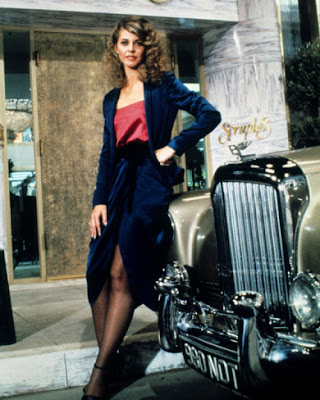 No joke, guys! ABC just announced that they greenlit a new show based on Judith Krantz's scandalous novel, Scruples. Natalie Portman will be producing and you can read more about it here.

As you all know, Lindsay Wagner starred in the fun, but obviously watered down 1980 TV mini-series adaptation, which is available through Warner Archives.

Anybody have any thoughts on the novel, mini-series or upcoming TV show?
Posted by Amanda By Night at 11:05 AM

I remember watching the mini-series when I was about 7 or 8 years old, and I had a good memory of it. Last year I could watch it again and I liked it even more. I read these news about a remake the other day, let's hope they make a good job, but it won't have that 80's "je ne se quoi".

I've read the book but haven't seen the miniseries, but I will before the this new show starts. I agree though, night time soaps now aren't the same. I love the excess of the 80s (and the hair)!

This won't be the first series attempt for "Scruples," back in '81 ABC greenlighted a pilot movie for a Scruples series starring Shelley Smith in the Wagner role, with Dirk Benedict, Jessica Walter, Roy Thinnes, Olga Kartalos, and Priscilla Barnes (among others) in support. The movie aired as an ABC Friday night movie-of-the-week; wish it were available somewhere, just to see how it holds up compared to the miniseries.