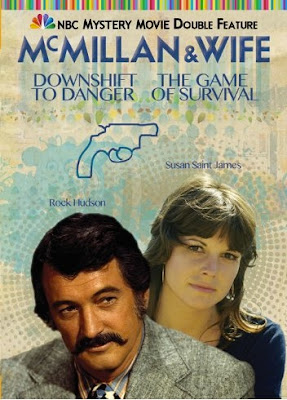 Hmmm, even though all six seasons of McMillan and Wife are on DVD, this little two episode disc was released recently. Both episodes, Downshift to Danger and The Game of Survival are from season 4 as well. So, why is this release so cool? Check out the little NBC Mystery Movie title at the top. Call me a Mystery Wheel nerd, but I think that's kind of neat. I'd like to see more releases like this only with different shows put on the disc. Like, how cool would an episode of Cool Million be if it was double featured with McCloud? Ummm, pretty freakin' awesome! (although it should be noted, I'll just take the Cool Million episode!)

Also, I stumbled across this great article with a list of some of the more obscure and short lived TV series from the 70s. Check it out!
Posted by Amanda By Night at 7:47 PM

I remember seeing a few episodes of McMillan & Wife, but that's all. I wish some network would bring back the mystery movie wheel idea. CBS would rock it, they could have occasional Murder, She Wrote flicks, maybe some Diagnosis Murder, with new stuff, as well. But, only in my dreams, I think.

I don't count season six. Sorry. No Sally, no McMillan and Wife. (And the name change doesn't count.)

I picked up all five seasons recently on DVD and as I went through them, especially season 3, with "Death of a Monster and Birth of Legend" and "The Devil You Say", I didn't remember the show being quite that demented with the plots. Not a knock. Love this show.

I love the idea of Murder, She Wrote and Diagnosis Murder best of or double feature DVDs. I'd go crazy on it, even though I watch MSW on Netflix all the time... At that point, it's for the box art! :)

I don't think I've gotten to season six of McMillan and Wife, so that's interesting info... I only have season one, but man, what an awesome show...