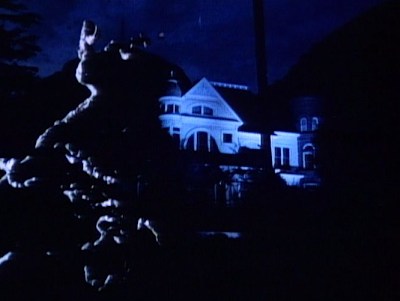 One of the few things I regret about leaving LA is that I didn't hunt around for some of the awesome locales that were used in films. I've been to a couple of places (and was actually inside one of the houses used in Halloween!), but I really didn't take advantage of tinsel town in any proper way. It was mostly just a drinking hole. A fun one, but I guess it was time to have cocktails elsewhere. Luckily, there is a fantastic blog called The Location Scout where I can at least get some good info on the destination spots of some of my favorite horror films. Don't Be Afraid of the Dark got a writeup and I suggest you visit this site and get your trivia groove-on. There's a couple of tasty tidbits, such as did you know that Tarantulas: The Deadly Cargo was also shot at the same location? And that's just one of several shows/movies that featured this house. Seriously. Go now, and check out his other posts while you are there!
Posted by Amanda By Night at 3:03 PM

Awesome! Didn't know a site like this was available, but now I'm hooked. Love finding out about the places movies were shot in. Thanks!

I agree, this a great site and I have been pouring over it myself. So glad you are enjoying it!