TV Movies and Art: After the Day After 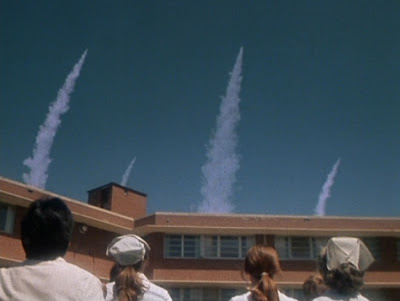 Although we’ve moved on to different conflicts, it’s hard to believe we live in a world where there is no Cold War. Not just that, but there are people who have never experienced first hand that kind of looming fear such as we had during that period. The 80s seemed to be in Russia vs. America overdrive in many ways, and has been well documented in the arts. I mean c’mon, 99 Luftballoons?!? We also had several films that presented a dark, dystopian future because many of us wondered what we’d like to be if we grew up! But perhaps nothing truly captured that sense of utter destruction the way the made for TV movie The Day After did. It was 1983, and I remember the complete terror I felt just knowing it was coming on TV! It was that scary because it didn’t make us face our fears through the implication of nuclear war, it made us face our fear by showing us the actual devastation of nuclear war. Obviously, this film impacted so many of us and art filmmaker Nathan Meltz taps into his experience of watching the film when it first aired in 1983. He made a short called After the Day After, which is a scene for scene retelling of the nuclear attack told through animation. He calls it “Dada-collage-meets-stop-animation.” It’s pretty funky and sort of moves nuclear destruction into a Terminator like parallel universe. Mixing footage from the film with industrial robots conveys a never-ending cycle of destruction that begins with humans and carries on into other realms. Of course, I’m not an art student, and you should check out Nathan’s film here and decide for yourself. You can also read an interview with him here.

I'd also love to hear what you think of Nathan's film, so please feel free to comment.


Watch the nuclear attack scene from The Day After:

While The Day After certainly resonates with so many of us, I think it would be interesting to explore these recesses of memories in other art works. Can we not envision a Bad Ronald sculpture or a stained glass Zuni Fetish Doll? Damn, I wish I were more artistic!

And finally, you can read an absolutely fantastic article about The Day After by clicking the link! 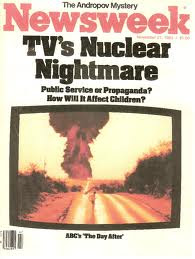 I remembered when this came out and all the side stories. Community centers were going to have therapy sessions for those depressed by the movie. For some reason, we could all make it through "Testament," "Threads" and "Damnation Alley," but this movie we needed therapy over.
Got to love the 80s and the fear and hatred the media had for Ronald Reagan.

Hi Amanda from WIP Guy, your fellow MAG contributing women in prison loving friend I love the site being a big fan of old TV too.

I remember being scared by "Threads" and "Protect and Survive" our own version of "Duck and Cover"-not least because it showed some surviors having to eat tinned ox tongue!!

I'm sorry I've arrived too late for WIP Month(who couldn't love "Love Child", "Convicted -a mother's story" "Terror in Block C" , "The Other side of Love" or "If Tonorrow Comes"?

I did write some reviews of classic WIP TV Episodes such as "Angels In Chains, "Caged Angel" , "Jessica Behind Bars", "Woman Unchained (Buck Rogers) and several others on the old "TV Shows for Girls".

Anyway, I'll keep checkimng your great site and you or anybody with my weird intetests is welcome to contact me at womeninprisonguy@gmail.com

Omigosh, I remember this movie and the hype leading up to it...if I remember correctly, it was the first made for TV movie that featured a parental advisory warning for graphic content. At school, I remember we read lots of current event articles that discussed the notion that a nuclear war could happen at any moment. When President Reagan met with Gorbachev, I felt that definitely took some of the edge off.

Wow, this clip is actually scarier to me now than when I first watched it as a kid. For a made for TV movie from the early 80s, they did a pretty good job with the special effects.

Hey all, sorry for the late reply!

I really need to give The Day After another go. I am sure whatever I saw was watched through the spaces between my fingers as I covered up my eyes!

I definitely need to check out Threads, but do I have the guts? We'll see!

And Pam, I agree that the clip is definitely scarier now. It's just really effective on its own terms, without the film. They did a lot of good work on that devastation scene!