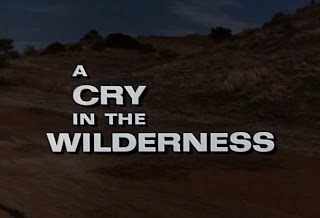 I wasn’t old enough to watch A Cry in the Wilderness when it originally aired as a Tuesday Movie of the Week back in 1974, but I do have hazy and warm memories of catching this awesome little thriller on our local channel. However, I had mostly forgotten about Wilderness until just a few years ago when a friend of mine took me to meet the director, Gordon Hessler! I’m not quite sure how I got invited to that event, but I do openly admit to drinking Manhattans with Mr. Hessler and talking about movies. I had a total flashback when the title came up.

Hessler dabbled in both small screen and B movie fare, and Wilderness is a decent combo of the two. At times I felt as though I was watching a potentially caustic drive-in flick, while other times felt oh-so-TV-movie. And I loved it! George Kennedy is Sam Hadley, a rough and tumble big city factory worker who longs to return to his country roots. He buys an isolated piece of land and dreams of selling fatted cows at the local market. Dream big, Sam! He brings his wife Delda (Joanna Pettet looking every bit the big city girl) and their son Gus (the adorable Lee Montgomery who was not so cute when he played Bobby in Dead of Night) along for the ride. They have only been enjoying the outdoors for about a month when Sam is bitten by skunk while pulling out a tree stump. Since they are about two days from civilization, Sam puts off a doctor visit until he finds the skunk dead. Apparently this little guy had traces of rabies and now Sam might find himself in the same predicament.

Like all sensible farm folk, Sam chains himself to a pole in the barn and sends his wife off for help. He know the emblems of going rabid-cray-crazy, and warns his son that if he shows any sign of hydrophobia (a fear of water), or tries some kind of sly Tom Foolery on Gus as a way to get unchained, he’s gone off the deep end and Gus should run. Of course, this coincides with a flood heading straight towards their home! So is Sam going insane or just protecting his family and property?

Wilderness was beautifully shot by veteran Harry L. Wolf, who worked primarily in television. I won’t kid you, this movie relies on a threadbare plot, but it is visually stunning and that helps move the film along. The flashback scenes are eerie, and there is a great shot of Delda in a car with a potential rapist. Good lord! Her story almost veers into total exploitation, but luckily it's prevented from going too far thanks to FCC standards. Never thought I’d thank the FCC, but there you go.  At any rate, it's intense.

The entire cast is in fine form, making the most of what little was offered to them. And despite focusing heavily on Sam and Gus, Wilderness crams in a few hillbillies to give it that B movie edge. Overall, it feels surprisingly epic, maintains its suspense and works despite its total WTF ending. Let’s give a point to the rabid skunk for a job well done.

Oh and by the way, Wilderness is available on DVD. Yay!
Posted by Amanda By Night at 5:39 PM

I thought a skunk was going to jump out of the bushes and bite me for years after seeing this as a kid...
You may not recall that the day we drank with Hessler was the first time we met...

I do remember that I first met you at Hessler's house, which is part of why I love that day so much!

It was SO much fun. I wish I could have gone on more of those trips... But this memory is wonderful!

My younger brother was an extra in the movie. Where was it filmed? No info on the internet.