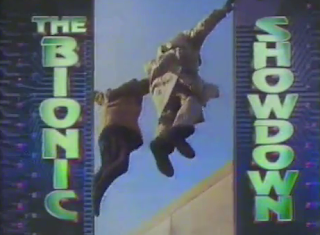 You know what they say, you can't keep a good robot down.

I love the Bionic reunion movies, and remember Bionic Showdown fairly well (not small feat, considering I haven't seen it about 15 years!). It stands out because the powers that be cast a very young and adorable Sandra Bullock as a handicapped woman fitted with the latest state of the art bionic technology. A series featuring Bullock was planned but sadly never came to be. Can you image what her bionic powers could have done to that bus in Speed? The mind boggles. 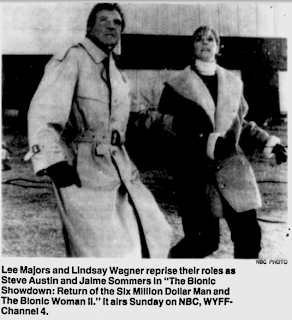 Bionic Showdown was the second of three reunion movies. The first, titled The Return of the Six Million Dollar Man and the Bionic Woman came out in 1987, followed by this showdown, and then followed again with Bionic Breakdown in 1994! That's a whole lot of electromechanical parts!

While Bullock is as cute as a button, I think the failure to get a new series off the ground only proves that you can make things all shiny and tech-y, but that one-of-a-kind-chemistry that both Majors and Wagner possessed cannot be replaced. On their separate shows they were fantastic, but together... Oh yes!

Bionic Showdown premiered on April 30th, 1989 on NBC, and it came in #11 on the Neilsen ratings for the week. If you are going to admit to your shortcomings in life on a blog, I have to confess that I did not see this airing. I caught it a few years later on a Bionic Movie Marathon that the local station was hosting (gawd, I miss local TV). Honestly, that's probably the only way to watch these crazy silly fun flicks!