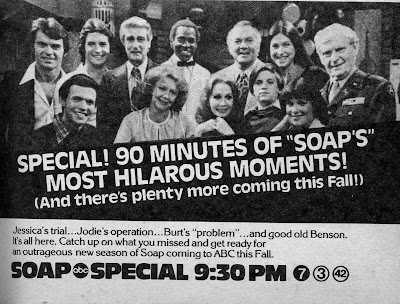 When SOAP premiered on ABC on September 13th, 1977, I was not allowed to watch it. I remember it came on fairly late at night (9:30 on Tuesdays), and I must have been getting ready for bed at that time. Still, to this day I have no idea if I wasn't allowed to watch it because of its time slot or because of its content. A few years later, when SOAP went into syndication, our local channel showed it nightly at around 7 pm or so. I was older and wiser, being all of nine or ten at the time, so I guess my parents thought it might be alright to let this kid give this incredibly smart series a go.

As a kid, I loved it mostly because Burt Campbell (Richard Mulligan) was insane and adorable. From believing he could make himself invisible, to alien abductions to becoming sheriff (!) of Dunn's River, Connecticut, it was virtually impossible for me not to grin when he was on screen. However, while Burt may have been the original draw for my young-person-brain, I was also getting into some rather heady stuff. Alongside all the infidelity, prison breakouts and baby possession, SOAP worked mostly because it understood the connection melodrama has to raw human emotion. Jody Campbell's (Billy Crystal) struggle to become not just a father, but recognized, respected and accepted as a gay man who is a father, wasn't without its bumps in the road, but was told with a lot of heart and introduced issues that many of us had probably never considered. There was also Danny's (Ted Wass) awakening to racial intolerance when he dated Polly (Lynne Moody), and the ongoing hilarious, but also heartbreaking tale of Chester and Jessica's I-love-you-I-hate-you-saga. Oh, and then there's the episode where Benson leaves. Tissues please.

But nothing was as tragic and as haunting for me as the death of Elaine (Dinah Manoff). In her agonizingly shocking and sad final scene, she dies in Danny's arms not long after he realized that he really did love her. To this day, I still get choked up when I think about it.


And that was the beauty of SOAP, which ran for four glorious seasons. They understood how to walk the fine line of outrageous stories told with simple but very real feelings. I know most people think of SOAP as a spoof of the daytime drama, but it was really an all out glorious tribute, all done with a big smile and bunch of hearty laughs. That's good television, indeed.

Did you know there is an upcoming book about SOAP? Visit Soap! The Sitcom That Broke all the Rules for the deets.


Here are some SOAP promos:


Peter's Murder (aka an good excuse to look at Robert Urich):


A look at Elaine and Danny:

I agree with everything you said (which is rare for me). This was one of the shows that made the 70s a unique decade in television history. Even with what passes for originality on cable these days, this is the show I hold up as what television CAN do.
The reason you were not allowed to watch it of course was because the various "religious leagues" deemed it inappropriate becasue of the "gay" character. Even before it aired they took to the media decrying how this "filth" could get on TV. As it turned out, Jody Campbell's character was flawed, complex, and had all the same problems as a "normal" person. Gay was seen as human also and opened the door to another gay themed show in the 1980s by the name of "Brothers." In fact, I will contend that Billy Crystal's character was more fully formed and interesting character, than anything the networks are trying to pass off as the obligatory gay characters we see today in every show.