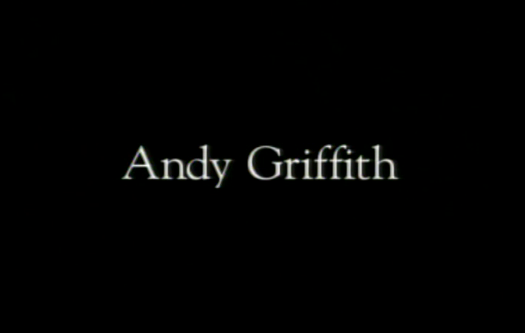 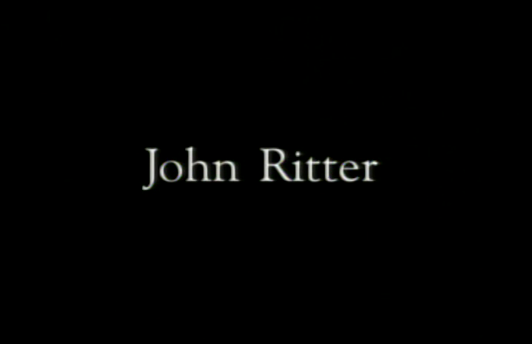 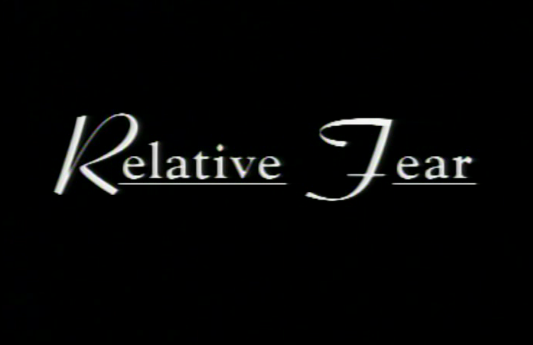 Fans of made for television movies know that actors like John Ritter and Andy Griffith often went against type in carefully chosen one-off roles. With the exception of (maybe) Robert Reed and Elizabeth Montgomery, there aren’t too many others who did it better than Ritter or Griffith, both digging deep into dark dramas that sometimes bordered on horror, using telefilms as vehicles to exercise different acting muscles. I’m sure the casting director of Gramps did a little happy dance when they wrangled these two wonderful talents to star in the pitch black comedy that looks a bit like a gender-bending Lifetime domestic thriller. 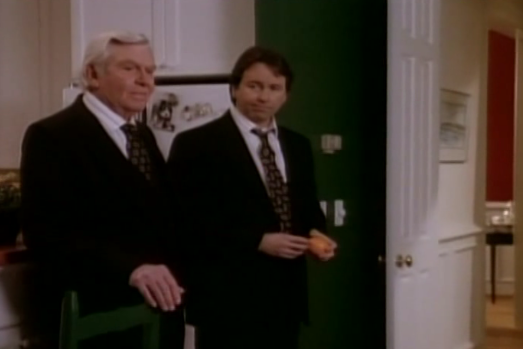 Gramps, one of the more culty telefilms of the 1990s, does not disappoint either. Ritter is Clarke MacGruder, a likeable family man who contacts his estranged father, Jack (Andy Griffith) after his mother dies. Charming Jack shows up at the funeral and quickly moves into his long lost family’s good graces. But he’s not planning to leave anytime soon, and begins a series of manipulative, often violent, schemes to stay in the fold. Things quickly escalate to murder, and as the family finds itself ripping apart at the seams, Jack attempts one more deadly reunion. 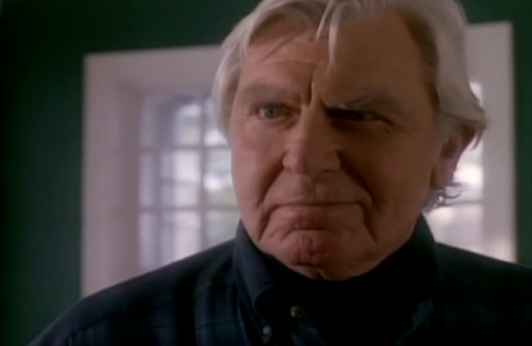 The above pithy synopsis does not really do any justice to Jack’s dangerous (but oh so fun to watch) plan hatching. He is incredibly devious, and knows how to establish complex manipulation as well, exploiting a maybe-past affair Jack’s wife Betsy (Mary-Margaret Hume of Dawson’s Creek and the quintessentially eighties Charlie’s Angels ripoff Velvet) may have had with her co-worker to the hilt. He hires a hooker to pose as Betsy in a no-tell-motel kind of situation. This enthusiastic woman of the night “accidentally” leaves Betsy’s calendar behind, and drama ensues. Also, gramps gets a little action in that scene too! 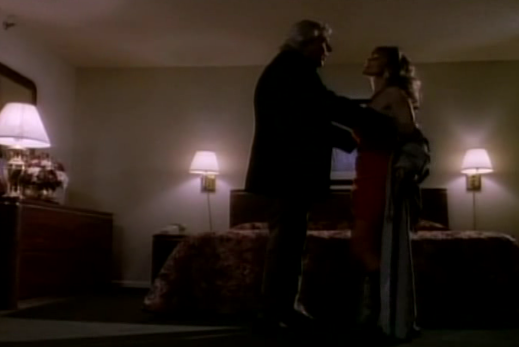 He also bashes in knee caps, terrorizes little kids and makes no compunction when it comes to blowing away the grandfatherly competition. In short, I love him. 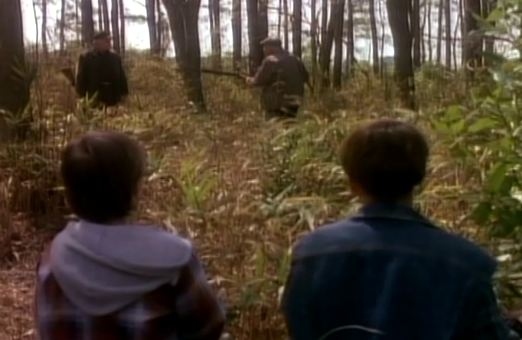 While Clarke is the guy dealing with all of the collateral damage, it’s his son Matthew (Casey Wurzbach) who is the apple of Jack’s eye. After years of life without his son or a family, Jack wants the little guy all for himself, plying him with candy, and even lying for him in an effort to win his grandson’s undying love. Unfortunately, when this movie ends we don’t get a glimpse of Matthew inheriting Jack’s mean streak. Sure that’s probably way too predictable, but you know, keep the dream alive. 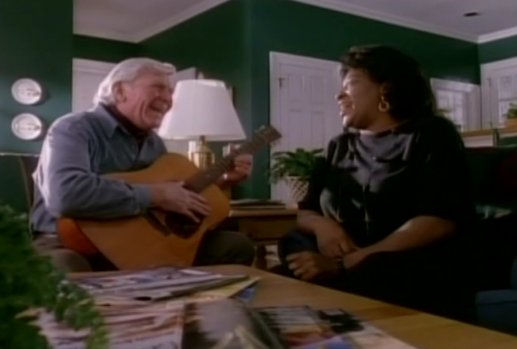 Gramps knows exactly what it’s doing. From the opening sepia toned shot of a young father taking his kid fishing, screenwriter J.B. White and director Bradford May cleverly nod towards the more serene relationship between Andy and Opie, only to cut to a handsome but older Griffith torching a house! So, while Gramps takes a bit of time establishing the relationships between characters, that underlying theme of menace permeates each frame. 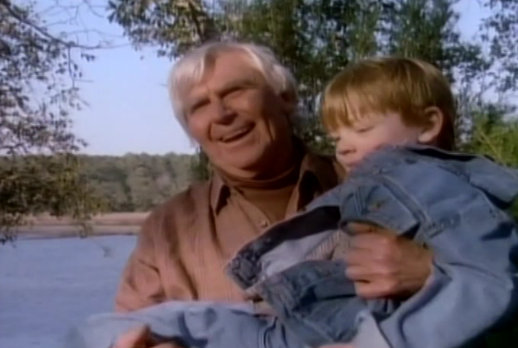 According to Ritter’s widow, Amy Yasbeck in her book With Love and Laughter, John Ritter, the film was shot in North and South Carolina, and Yasbeck wrote that she was impressed by the level of evil Griffith brought to the part. I kid you not - she actually wrote, “Evil Andy was riveting.” Yasbeck went on to say that Mr. and Mrs. Griffith loved John so much they named their pet dog after him, Mary-Margaret Ritter (presumably the Mary-Margaret is a loving nod towards Hume). Every holiday season the Ritters could count on a card from the Griffiths with their beloved family dog. 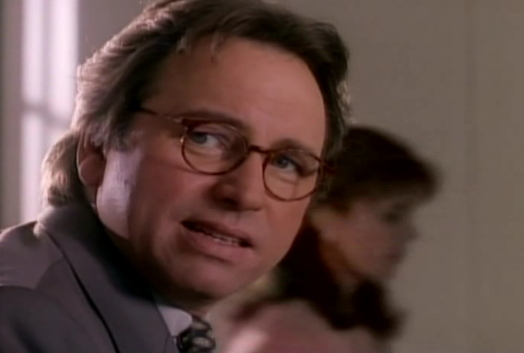 Casey Wurzbach also fell in love with John (as we all did, really) and recently ran a marathon in his honor with Yasbeck in an effort to raise money and give attention to the risks of aortic dissections. Visit Casey’s facebook page for more info. 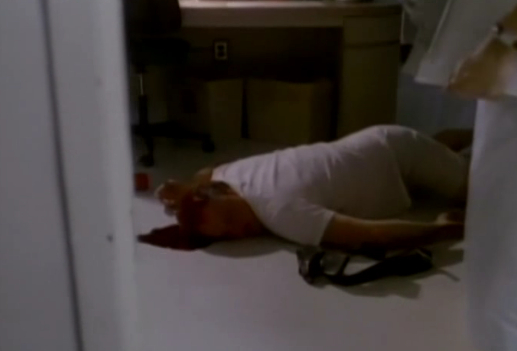 I’ve written a little bit about both Griffith and Ritter’s post-comedy series work, and watching the two team up in Gramps the other night reminded me of what mammoth talents they both were. While this is really Griffith’s film, and it looks like he’s relishing every freakin’ second, Ritter is the anchor, or the domestic thriller straight man, and is also wonderful in a great little movie that deserves more attention.
Posted by Amanda By Night at 11:55 AM

Great article about one of my favorite thrillers! Andy and John were both marvelous in this movie. Wish this were easier to find on DVD!

I've been looking for an American version of the DVD for years.Don't understand the problem tempted to email the production company at this point