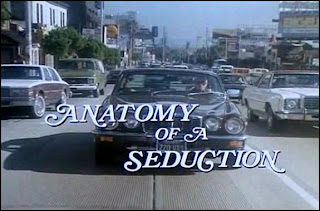 1979 was a great year for romance. Or so they tell me, cuz, you know, I was 9 and stuff. Some great love stories played the small screen, such as the incredible tale of underage lust known as Sooner or Later, a little ditty about older people who find love and tragedy called Valentine and the epic time travel love story The Two Worlds of Jenny Logan. Love was in the air, in the wood paneling and floating inside the bottoms of our bells… 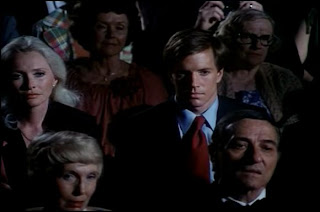 Susan Flannery is Maggie, a divorced woman with a teenage son working at an architecture firm. It seems everyone around her is divorced and on the make. Her best friend is Nina (Rita Moreno who owns the show), another divorcee who is content with Mr. Right Now. Nina’s son Ed (Jameson Parker who was 32 but played a 20 year old, and quite well), comes home for the summer. He’s a Princeton student of architecture, so Nina fixes him up with Maggie. Of course, Nina only meant as an intern, but one thing leads to another and before you know it Ed and Maggie are hot to trot. 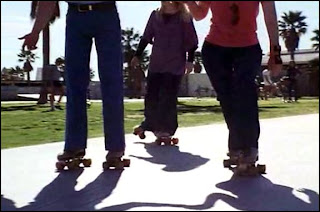 Wheeeee!
At the beginning of the film, Maggie is an extremely dignified, but rather uptight, career woman. When Ed begins to impact her life, she starts doing things she long put behind her, like going on amusement park rides and roller skating. Ed also takes her to the ballet and to plays and is sophisticated enough to appreciate the things the wiser Maggie enjoys. Of course, all good TV-movie-things must blow up in someone’s face, and boy does it ever! When Maggie’s son and Nina learn about the illicit affair, it gets real ugly and Moreno has the scene of her life just emoting the hell out of it! God, I love that woman!

Eventually, Maggie has to take the reins of the situation and determine not only what she wants but also what is best for Ed.

I admit it, I loved every second of this movie. It’s a great little romance flick with wonderful acting, a sweet story and roller skating! What’s not to love? Flannery is great as the sophisticated Maggie. The character commands respect and Flannery delivers. She makes Maggie relatable while also playing her as a bit of a super woman. She never flounders, always knows what to say and can handle any situation. Parker is also really good. He was so adorable in this movie, he made me want to giggle. I loved the slow development of their relationship and watching his schoolboy crush turn into something far more powerful… and believable. Maybe I was just up for a little romance, as I have been known to be, but this really fit the bill.

You can watch Anatomy of a Seduction online at Hulu. 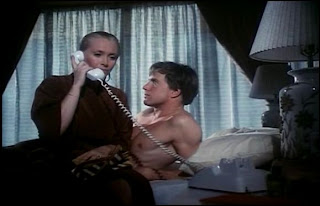 Why couldn't Making of a male model be something better like this!?Because having Joan Collins ups the cheese factor 150%!!

Hello, i think that this post is very good, i would like to read more about it

I started rewatching Anatomy last night. It's just so great! Your timing was perfect Anon! Now I'm in the mood for it again! :)

The director of ANATOMY OF A SEDUCTION -- Steven Hilliard Stern -- died in late June at age 80. Stern also, more or less, remade this Tv movie 3 years later. This time the Tv movie in question was titled FORBIDDEN LOVE with Andrew Stevens and Yvette Mimieux and the ending is verrry similar to the ending of 'SEDUCTION'. → Both TVM's were released by the same video company. HBO/Cannon Video released ANATOMY OF A SEDUCTION and 'HBO Video' released FORBIDDEN LOVE. I bought both of the tapes YEARS ago and watched them. I'd noted both TVM's were directed by the same man and I reckon if the 'Older Woman Younger Man' formula worked for the '79 movie well, shucks, then it could easily work again for the '82 film.