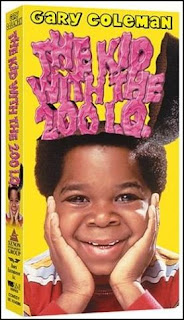 Although Gary Coleman was a couple of years older than me, I always think of him as a kid. Unfortunately, that's how most people looked at him, and it was something that must have haunted him all these years after childhood success. He died on Friday at the age of 42, and I couldn't be sadder. As a child of the 70s and 80s, Gary was a mainstay for me and my family. Not only was Diff'rent Strokes a must, he made several awesome TV movies as well as appearing on such shows as Buck Rogers. He was friggin' adorable and had perfect comic timing. He was that kid you wanted to have as your best bud because you knew hilarious adventures were just around the corner.

I am not going to sit here and pontificate his tragic life because I think we all know a little bit about what it was like for him. For me, I'll remember him for that spunky spirit and for starring in The Kid with the 200 I.Q., which I saw about a gazillion times. 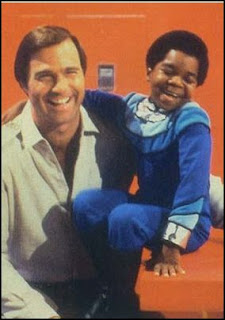 Here's a list of some of his TV movies and awesome guest appearances:

RIP Gary, you will always make me smile when I think of you.
Posted by Amanda By Night at 9:57 PM

Email ThisBlogThis!Share to TwitterShare to FacebookShare to Pinterest
Labels: news, other

That episode of 'The Jeffersons' with Coleman is GOLD!! His comic timing was perfect.

This is really sad. I remember THE KID WITH THE BROKEN HALO being on HBO one summer non-stop in the early '80s.

I loved him in that Buck Rogers episode!

I loved him in that Buck Rogers episode!-Unk

It is sad. That was a nice tribute to him, Amanda. I can't say I saw many of his movies but I always loved Different Strokes and the show that came on after it, The Facts of Life.

Hey all, thanks for posting comments. I'm still really saddened by this. I was hoping things would pick up for him and they just didn't. I find this even more tragic than Corey Haim...

Oh how I miss my 80s idols. Too many gone too soon.

I agree, so many are gone now. Gary Coleman was so funny as little Arnold. I loved watching that show.