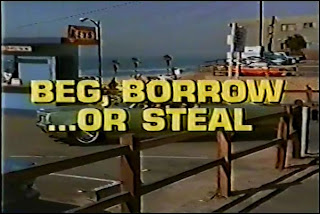 Mike Connors is Vic, a down on his luck paraplegic Vietnam veteran who hits hard times when he’s let go from a swanky security job at the local museum. He lives with Cliff (Michael Cole), who has no hands and Lester (Kent McCord), a blind man. Cliff uses mechanical hands, and with excellent dexterity I might add, but he weirds out his employers and has to jump from job to job. Only Lester has any kind of steady work, and that's a gig collecting parking money at the beach. Because Vic knows the museum and because he knows how a good security system is devised, he decides he’s going to steal some jewels from a new exhibit. He plots this caper with Cliff, and eventually (and begrudgingly), they bring Lester into their fold. The plan is definitely risky even if these guys weren’t dealing with handicaps, but they also know there’s not much ahead for them work wise. The trio had once owned a laundromat and this is their last chance to grab that dream again. 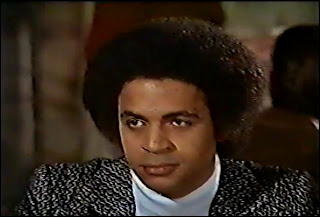 That's Ron Glass as The Heavy!
Beg, Borrow or Steal is an excellent ABC Movie of the Week that has everything from serious social commentary to a nail-biting bank heist! And they did it all in 74 minutes! The story immediately throws the viewer into the plight of the three men, yet they never make them seem pathetic. Even down on their luck, they are given a lot of dignity, brains and charisma. The most sympathy arises when Cliff is let go from his job. He’s a good worker, but once he sees “the look” in his boss' eyes, he knows he’s down for the count, and he’s resigned to it. There’s not much backstory given to the characters' time in Viet Nam, but there’s no doubt it was a horrific experience, and their survival instinct emerges in the form of an elaborate robbery!

The heist itself is the high point of the movie; it’s extremely suspenseful and seriously brilliant. While I was watching these men work their magic, I wondered how this TV movie would wrap up the story. I didn’t feel like they could make them criminals who skirt the repercussions for stealing, no matter how sympathetic the characters were. And indeed the filmmakers agreed. I thought the conclusion was probably the weakest part of the film, although I didn’t really mind the sweet and unrealistic ending. Those guys deserved a break! 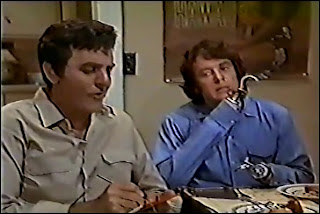 Plot hatchin'!
David Lowell Rich, who had his hand in many made for TV movies (Crime Club, Satan's School for Girls), directed Beg, Borrow or Steal with a lot of heart, from a story by Paul Playdon and Grant Sims. With the minor quibble regarding the ending aside, this movie makes the characters sympathetic without pandering to their disabilities. They are also extremely likable and you’ll be totally rooting for them to get those jewels!
Posted by Amanda By Night at 6:54 PM

Email ThisBlogThis!Share to TwitterShare to FacebookShare to Pinterest
Labels: ABC Movie of the Week, cops, drama, great actor, made for tv, solidarity, suspense

Do you know where I can buy this on dvd?

I do not know where this movie can be bought. I would just try to google the title in quotes with the word buy in the search... I'm sure it's avaiable somewhere...

Nice review. I thought 'Hey, that's Shepard from Firefly' but I know Ron Glass has done lots of TV work. This sounds like a good film.