Must See Streaming Movie of the Week: The Initiation of Sarah (1978) 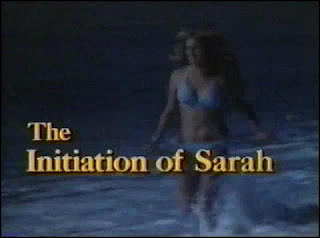 First things first: Thank you to Stacie at Final Girl for choosing this as the Film Club pick, and an extra big thank you to Netflix for streaming The Initiation of Sarah , which is simply a slice of TV movie paradise! For the record, my stills are from my trusty vhs print (I own the clamshell release, no less!). The streaming quality is much better! And please make sure you stop by Final Girl where you'll find links to more reviews.

I love Carrie riffs. From Jennifer to The Spell to Aenigma to, yeah, I’ll say it, even to Zapped, the put-upon-nerd-gets-revenge tale is one I hate to pass on. As a goofy teen turned slightly goofier adult, I always found a kinship with the underdog and love all films where the little guy comes out big. Even if it means the massacre of everyone on school grounds! Makes me edgy. At the same time, revenge becomes totally awesome when the bad guy is of the love-to-hate- ‘em variety. It’s one thing to watch the comeuppance of a villain, but it’s even sweeter when you find yourself cheering for their downfall. As much as I love Morgan Fairchild, I truly loathe her in her bitch-perfect portrayal of Jennifer, the beautiful sorority girl who uses tight turtlenecks and her perky little nose to hide the deep shades of black lurking within. God, I love her! Oh wait, no, I hate her! Oh, I’m so confused! 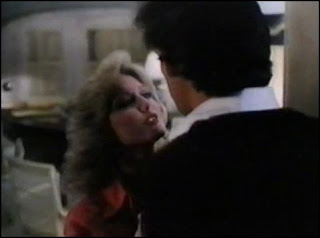 I love my stanky ho-bags!
Kay Lenz is Sarah, the shy wallflower who lives in her extroverted sister Patty’s (Morgan Brittany) shadow. Sarah is adopted and although Patty is her close confidante, she feels pretty distanced from the rest of the world. Getting into the ANS house, which is the coolest sorority on campus, would mean the sisters could stay together, but because Sarah is kind of frumpy (but has great bone structure), she also pledges at the PED house, which is where the smart, out of the loop girls hang. Unfortunately, the ANS house says PED is short for Pigs, Elephants and Dogs and their utter refusal to play nice makes them the arch enemies of nerdy girls the world over. The PEDs are led by the eccentric Mrs. Hunter (Shelly Winters), who gives off an extra weird vibe when she lets on that she knows a thing or two about Sarah’s parents. She’s also known for dabbling in witchcraft and this draws Sarah in because she’s been tangling with some secret extra sensory skills herself. Mrs. Hunter uses these powers to even the score with ANS, and Sarah becomes an unlucky pawn in a dirty game of witchcraft vs. bitchcraft. 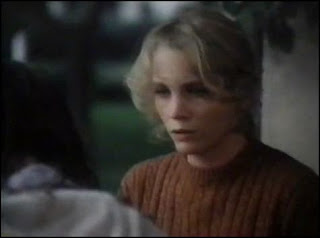 My pet Mouse
The Initiation of Sarah has a lot going for it, and like its earlier theatrical counterpart, Carrie, it works because the downtrodden are likable and sympathetic. Tisa Farrow plays Mouse and she’s so sweet and demure and sad that you just want to take her home, wrap her in a blanket and watch Facts of Life with her. Hey, when the world never seems to be living up to you dreams…

Lenz was extremely well cast in the lead. Although it’s obvious the actress is completely gorgeous, she really embodies that shy, awkward thing that many real young women possess as they try to find their way in the cold, cruel world of college. She brings the PED girls together in a way no one had been able to, so you see there is a hidden strength that doesn’t rely on telekinesis, but her inability to keep her powers at bay make her that much more tragic. 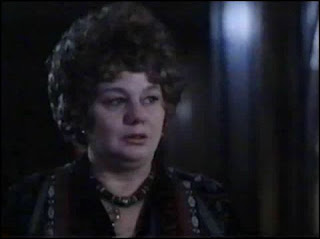 Shelley eyes the scenery she is just about to chew!
The theme of longing and acceptance permeates many teen films, and there’s obviously a reason why we keep seeing it. The added mixture of mass slaughter is a little newer, but it only demonstrates the ugly, unharnessed power of repression. And for those of us who were always last picked for the teams during P.E., there is a bittersweet feeling of victory to be gained.

Sarah is one of the better remembered Made for TV movies of the 70s, and there is a reason why. It’s got a timeless story, the acting is tops (I love my Morgans!) and I have to say it’s aged rather well. Sure the plaid skirts might look dated, but the message of acceptance and the thrill of revenge never gets old. Maybe we should be worried about that… 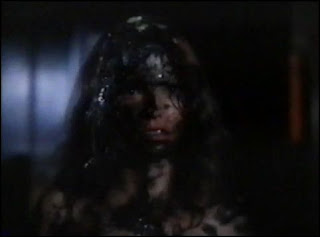 The revenge will be oh-so-sweet
Read my my review of the 2006 remake at CampBlood!
Posted by Amanda By Night at 9:50 AM

Fairchild is great in this. There is a brief period where she pretends to be nice and you kind of want to believe her even though you know better. I love this TV movie but it feels a bit incomplete. If only the end had Sarah transferring her power into Mouse for a squekal!-Unk

I love the word "bitchcraft" and will endeavor to use it in a sentence today. I mean, other than the one I used it in just now.

This movie was so great, though the ending needed a little more ... something.

Thank you for a thoughtful review. I may have made some fun of it, but you are right it has aged rather well.

Morgan Fairchild and Tisa Farrow FTW! The end is suuuch a bummer, but the rest is so much fun (err, depressing fun) that I don't care.

I totally figured that Shelley Winters was actually Sarah's mother.