Must See Streaming Movie of the Week: Someone I Touched (1975) 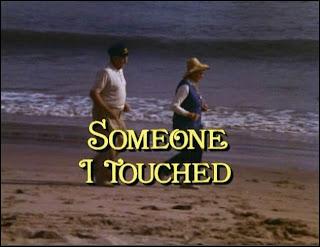 Eons ago I wanted to do a VD Week with this movie, Intimate Agony (1983) and an Afterschool Special titled A Very Delicate Matter (1982). While I sought out both Touched and Matter, I got itchy (no pun intended!) and decide to write up Agony in the meantime. I thought for sure I’d never find this controversial TV movie starring Cloris Leachman as a victim of the swingin’ 70s who isn’t all that innocent when it comes to the game of leg spread. Lo and behold, Netflix Streaming has picked up this awesome little gem and now I’m re-igniting my hopes that the obscure Afterschool Special may one day sit in my hands (granted I will wear plastic gloves to prevent the spread of any VD!)… 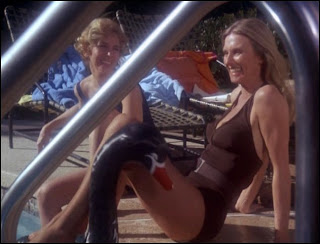 Oh my god, too fab! I hate her!
Someone I Touched is about a married couple and syphilis. Cloris is Laura Hyatt, a career woman dynamo who suffers the strains of a marriage where the husband doesn’t always like her independent status. She’s married to Sam (James Olson), and he’s alright… sometimes. Although the problems between the couple are apparent, one thing they never do is fight. And maybe that’s the problem. Here we are, smack dab in the swinging 70s where women were redefining their roles and men were feeling threatened by it. At the same time this groovy cool attitude permeated the scene, making everyone feel like they had to be all hip about their insecurities. Sure some of them see therapists but they still lack any real communication with their significant others. This leads Sam into a reckless one night stand with a twenty year old grocery store cashier named Carrie (Glynnis O’Connor, looking all of 17). When she is approached by Frank Berlin (Andrew Robinson) from the Health Department and is told she has syphilis, she gives over the names of all of her lovers (all of her heartless lovers, it turns out. Sam can’t even remember her name). Things would be rocky but doable had Laura not gotten pregnant. Now Sam must confess his misdeeds to save the potential horrendous fate of his unborn child. 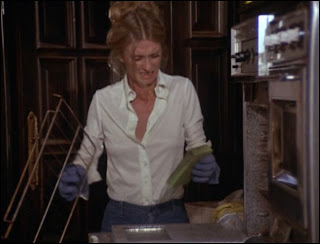 She even looks amazing when she does the housework!
Someone I Touched really lays everything out in this sort of 70s lackadaisical matter. The way the characters act too-cool-for-school makes them seem removed. While it’s easy to dislike Sam and his dumb mid-life crisis, it’s also hard to evoke too much sympathy for Laura, who eventually confides in her friend that she will always take back her husband, even when he’s cheated. It’s very old-school Harlequin in that respect because the woman plays victim and seems somewhat contented with that role. However, Touched takes a turn and we start to see through the characters thin and aloof veneer, albeit only slightly. I don’t necessarily agree with the outcome of the film, but once we reveal all the secrets, the characters definitely become more real. 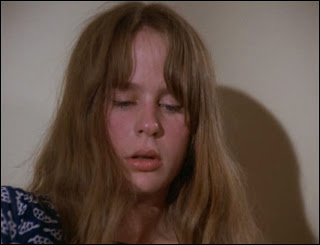 Pretty Carrie right before the smackdown with her mom!
I think because it was so early into the 70s, the removed nature is intended to ease the audience into the hot-button subject matter. Syphilis is dangerous but also curable, unlike the herpes epidemic in Intimate Agony. Also Agony goes for the melodrama jugular and really pulls no punches with the characters. I think it’s a more effective film because the actors are allowed to experience darker emotions. But Cloris does look devastatingly fantastic here, and she’s wonderful in the part, I just wish the writers would have allowed her to bite into meatier material. Glynnis and her relationship with her downtrodden mother is by far the best part of this film. It’s sad, and somewhat tragic, as Carrie has no sense of self. She loves the men she sleeps with, even if it’s just a tawdry one night stand. I desperately wanted her to end up with the Health Department guy. Alas, that must have been saved for another film.

I was truly astounded to see this streaming on Netflix and was thrilled I finally got a chance to watch it. Maybe I didn’t get my much dreamt about VD Week, but surely there are other sexually transmitted TV movies to be had… so I plan to keep the dream alive! 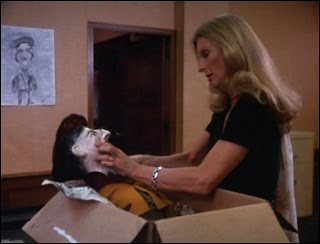 Laura preparing to spread her VD! (I know, I went there!)

Update: Check out this review at Movieline! And thanks for the heads up Marc!
Posted by Amanda By Night at 9:38 PM

My friend, author and Movieline critic Alonso Duralde, just wrote a piece on this. Apparently, this is beginning to become a meme:

My goodness, they just don't make movies like this anymore, I'm telling you. There are no more lessons to be learned or consequences to face on tv and in movies today. sad. Interesting and fun post as always.

Marc, I updated the blog post with a link to your friend's review. It was hilarious, and I'm kicking myself for missing the viral joke... Brilliant!

Ginger, this is some kind of movie. Very of its time. Glad to see more people can be exposed (ha!) to it!