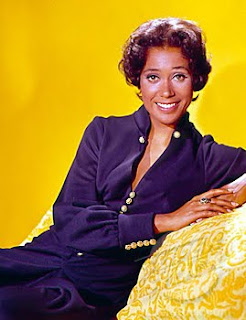 Women is one of those movies that clung to me like a childhood nightmare, with only snippets of memory filtering through my head. I had forgotten most of the story and even the actors as I got older, but I remembered loving the movie. When I was finally able to rewatch it again, approximately two decades later, I was a little disappointed in the campiness of it all. However, I was also struck by Denise’s character, Joy. The five women in question have all gathered for an informal college reunion on a remote island. The only other two people around are the hunky Robert Conrad and the dashing but odd Bradford Dilman. The other women are played by Joan Hackett, Stefanie Powers, Anjanette Comer and Julie Sommars. While they all had secrets, Joy’s was that she was a high class call girl and not all that upset about it! The whole make-up of her character could easily be construed as demeaning, simply because she was a college graduate who chose hooking over a "real" job (seriously, tell me that isn't hard work!), but Denise rose above the character limitations and triumphed in this light stalk and slash flick as as the Final Girl. Well, technically she’s not the only survivor, but she is the only one who manages to keep her wits about her. 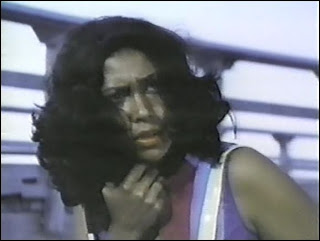 Things get serious in Five Desperate Women
When Denise first started acting in the 60s, she was a member of the Moses’ Free Southern Theater and she travelled to many rural places so blacks could experience live theater. Then she joined the Negro Ensemble Company before she worked in television. She was also heavily involved in the civil rights movement and her 2005 novel Freshwater Road is partially based on her experiences with the movement. 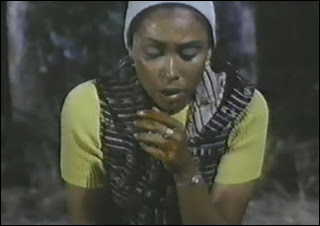 Things get really serious in Five Desperate Women!
In the 80s when she was on In the Heat of the Night her character married Carol O’Connor’s and they became one of the few interracial couples in the history of television, garnering some controversy. During the series run, she also wrote six scripts and in the late 90s she returned to school in a graduate writing program at the University of California where writing became her main passion. She last appeared on film in 2004 in Proud which also featured Ossie Davies. In an interview, Denise said this about writing: "I'm happier now, because this is my baby. It uses me, all of me. It doesn't diminish any part of me, mind, body, soul."

However, she hasn’t totally abandoned us. You can catch her on Way Black When airing this Wednesday, February 2nd at 10pm!

It’s no wonder that Denise could make a typically throwaway character in Women so memorable. This talented actress always added a touch of class, confidence, and most importantly, depth to her surroundings.

You can read an interview with Carol O'Connor and Denise Nicholas about their interracial marriage storyline on In The Heat of the Night here. 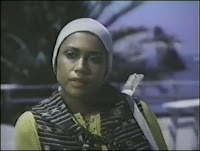 Email ThisBlogThis!Share to TwitterShare to FacebookShare to Pinterest
Labels: bios, Black History Month, made for tv

Thanks for posting about her--she seems to be an interesting person as well as someone who chooses interesting roles. I recognize her from "Room 222" but now I'm going to keep an eye out for her in other things too.

Thank you for writing about Denise Nicholas with such affection, she was one of the very first examples of black women that i ever saw on television. If she was on a television show, no matter what it was, my family watched it...together. From "Room 222," to "In the heat of the night," she's been apart of my life.

I love Denise. She was just so dignified and lovely. She was fantastic on Way Black When and still looks great!

Hoo boy, she was a great-looking lady. Been watching some occasional ROOM 222s. It's notable that her character and Lloyd Haynes' were obviously sleeping together in one of TV's most mature relationships of the period. I suspect they were the first long-running young black couple on network television, weren't they?