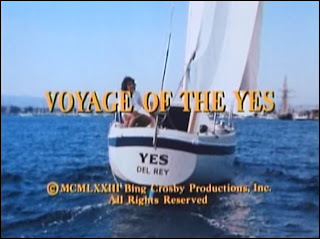 I had no idea that when I picked up my copy of the Voyage of the Yes that I was going to be watching a movie with two of my favorite studly funny guys who are in this month’s poll. I knew Mike Evans, most famous for playing Lionel Jefferson #1 on The Jeffersons was in it, but lo and behold, was that Scoey Mitchell I just laid my eyes on? Yes, it is. Scoey’s part is small but very important to this story about how complex and simple real friendship is.

Mike Evans is Orlando B. Parker. He’s from the Chicago slums but does his best to keep away from the nastier elements of his hood. Unfortunately, his uncle named Pretty (Scoey Mitchell) is doing his best to drag Orlando down to his level. During an argument, Orlando accidentally kills Pretty – and it ain’t pretty… I know, I’ve got a million of ‘em… and he goes on the run. 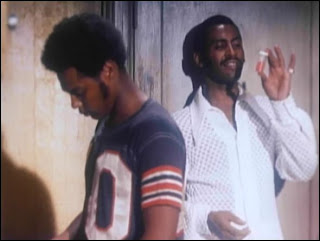 Pretty is about become less Pretty very soon!
Desi Arnez Jr. is Cal Maxwell. He’s the rich Beverly Hills type kid with a badass convertible and a sweet little boat. He is going off to college in the fall and wants to spend the end of his break sailing to Hawaii but his parents (played by the wonderful Beverly Garland and Skip Homeier) insist he bring someone. But Cal is a solitary kind of guy.

Luckily, Cal runs into Orlando, and asks him to go on his trip. No one knows much about Orlando, and they are especially unaware of the murder charges awaiting him if the law ever catches up to him. Essentially, Orlando is a really good guy, but this accident makes him do a lot of stupid things when he’s out at sea with Cal. It’s obvious he wants to punish himself, but because he’s young and a little immature, he ends up becoming a hazard to both himself and his shipmate. They wind up stranded because of his self-destructive behavior, and without gas, food and water, time is running out fast. It is here, which is the bulk of the film, we watch two men work together and form an intensely deep relationship that surpasses color and background. 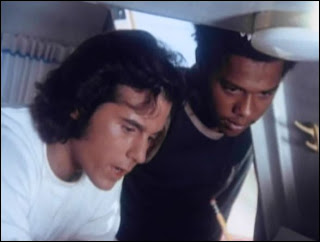 Studs of the high seas!
Voyage of the Yes is one of the most quietly profound movies I have seen in a long time. It was originally intended to be a pilot and I think it would have made a compelling series, as we watched these men travel to various ports. As it stands, this film is a character study that embraces our many differences and commonalities. And like any good human drama, we get a decent shark attack as well! What was so interesting about the whole set up was that it is reminiscent of another shark-irific TV movie aptly titled Shark Kill, which came out three years later in 1976. In that film we’ve got a white and a Hispanic fighting the odds of nature and learning to understand each other along the way. The only difference was the pair in Shark Kill weren't even afforded the luxury of a boat, they were just floating around the ocean! The theme of man against shark was of course never better than in Jaws, but both Shark Kill and Voyage of the Yes do remarkable jobs getting inside their characters (granted, the shark scene in Voyage is only a small part of the film, albeit significant). These are small but effective films and something I wish we'd see more of today. 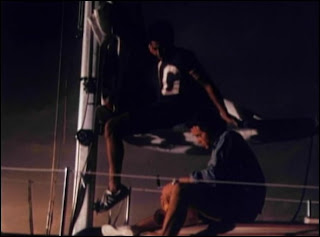 The quiet before the storm
Mike Evans is the standout. Taking Evans and Desi Jr. out of their comedic elements was a bold move, and the payoff is grand. Evans portrayal of Orlando is sensitive and heartfelt. It’s a little harder to like Cal at the beginning because he’s so remote, but that’s the point. Throughout their journey, Cal opens up and becomes a much more rounded character while Orlando comes to terms with what he’s done. This film makes great use of the Simon and Garfunkel song El Condor Pasa and the poignant and haunting ending has stuck with me for days.

I can’t say enough good things about this movie, but I’ll leave it simply at see this movie! It’s available through Amazon (DVD and Download) and it’s affordable too!
Posted by Amanda By Night at 8:41 PM

I have never heard of this before Amanda and it sounds great. Thanks for the post...I will seek it out!

Amanda, if you're looking for a Mike Evans fix, seek out HOUSE ON SKULL MOUNTAIN. (It also stars Victor French!)

Hey guys, thanks for stopping by. I do hope pick up a copy and see Voyage of the Yes. Excellent flick.

Propagatrix, I have House on Skull Mountain and have been wanting to see it. The Evans really seals the deal!

Hi Robert, sorry for the late response. It is indeed a haunting movie. It's poignant and moving. I can imagine the impact it would have on an 11 year old!

Omg, me too..i was 13 and it stuck with me to this day..not sure why I liked it soo much but I do..great song too..fit the movie to a tea..havent seen it since then either but I think ill find it and watch it again

I was touched by this movie when I saw it on TV. Every time I hear the song El Condor Pasa, I remember this movie. A genuine sleeper of a classic. Thanks for the review and the memories.

Hi Anon, thanks for commenting and I'm glad you enjoyed my review.

It is certainly a haunting film. I think about it often.

Howdy.....I've been searching for this movie for years..."Made for TV"? So hard to find and I didn't remember the name. Must have been 9 or so when I saw it one lazy afternoon. But I watched it last night : ) What strikes me the most about the movie back then and now is the character of Orlando....wonderfully played by Mr. Evans. He was truly "quite a lad" ....God Bless

Glad you were able to find the film and see it again. And yes, Mike Evens was absolutely wonderful as Orlando. I love him anyway, but he truly shines in this TVM!

Remember this from advertisements. The El Condor Pasa song

As I recall, it scared the living crap out of me. Memorable flick.