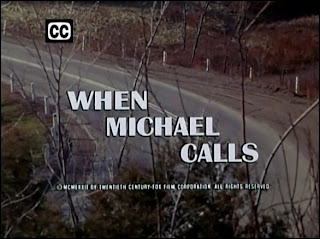 Based on the novel by John Farris (who would go on to write the screenplay for The Fury), the setting and premise of When Michael Calls may seem fairly trite by today’s “let’s make a music video” standards, but the more traditional horror films tended to rely heavily on meticulous pacing and mood. The premise for Michael sets up what may or may not be a tale of the supernatural and the second half falls into somewhat predictable territory, but the old-school atmosphere makes up for the little kinks in an otherwise solid little thriller. 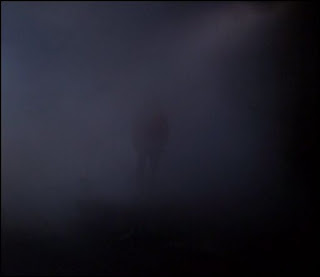 Michael? You are one creepy kid.
Ben Gazzara is the unfortunately named Doremus Connelly. He is also unfortunately divorced from Helen (Elizabeth Ashley with a cute Klute-ish haircut), as it’s obvious that he still longs for his ex. Doremus is a decent guy and a good father who finds a way back into Helen’s life when she starts receiving disturbing phone calls from her nephew Michael…

Oh, did I mention Michael died 15 years ago?

The voice on the other end of Helen’s calls is odd. It is obviously meant to sound like a little boy and I’m not sure it was the filmmaker’s intention or not, but it’s got a real fake quality to it. However, it’s that phony intonation which make the calls seem that much more disturbed. The fact that Michael calls Helen “Auntie-My-Helen,” also adds a real sense of creepy closeness between dead kid and disturbed aunt. 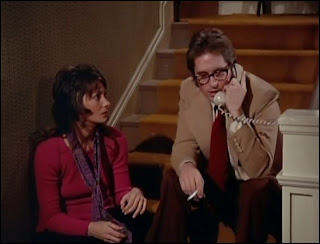 Smoking and rotary phones. Those were the days!
Director Phillip Leacock had a rocky TV movie career. He’s the man behind the excellent suspense Dying Room Only, but he also helmed the not-so-good Baffled that same year. He seemed more at ease with claustrophobic potboilers and he creates a grand amount of ambiance here, with dark, windy nights and those eerie phone calls. He’s also aided by an excellent cast, including those mentioned and a young Michael Douglas proving that I think men in glasses should make passes… at girls like me! Yes, he’s super cute here in this movie which premiered just a few months before he became a household name on Streets of San Francisco. However, the most interesting person involved in Michael would have to be James Bridges, who adapted the script from the novel. Bridges was a powerhouse in Hollywood through much of the 70s and 80s and wrote and directed such films as The China Syndrome (also starring Douglas) and the incredible Urban Cowboy! He also wrote and directed one of my favorite 80s flicks, Perfect. Seriously. I could watch Jamie Lee Curtis work out all day. The original novelist would get into film himself and his directorial debut and swan song was the incredible Dear, Dead Delilah, a movie that is often considered to be a made for TV movie (it isn’t), showing he had some interesting small screen-like chops. 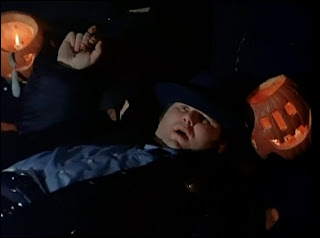 Dead-o-lantern
While never gory, which is the case with most TV movies, there are a couple of surprising murder scenes, and the set ups are fantastic. I also loved the small town and slightly depressed feel, and the idea that a school for disturbed children is just down the road only adds to the thick atmosphere of dread.
This ABC Movie of the Week actually got a DVD release under the name Shattered Silence, although the quality is rather questionable. There are some fairly affordable vhs copies available at Amazon and it was recently shown on Fox Movie Channel (sometime last year), so keep your eyes peeled! You definitely want Michael to call on you!
Posted by Amanda By Night at 4:59 PM

I actually did catch this a few months ago and enjoyed it. Wish they made more movies like this. Now all we seem to get are crap-ass cheap flicks. :(

Crap-ass cheap flicks that cost MILLIONS and MILLIONS of dollars to make.... :( indeed.

Yeah, I'm so into the less-is-more guys. This movie really takes so little and makes it so much! I wish newer films would take that cue.

Actually I have heard Insidous does, so I'm looking forward to catching it.

less IS more, seriously! Makes you wonder if this film inspired the later 'Halloween' movies. I am always so intrigued by these creepy seventies tv movies!

Ginger! Thanks for commenting. I don't know about Halloween, but I'm sure it inspired elements of some of the later more cerebral horror. It would be interesting to see what filmmakers may have seen this movie.

michael. 15 years later. family issues. creepy phone calls. halloween setting. a lurker in the darkness. i wonder if john carpenter ever watched this???
phillip leacock also directed episodes of gunsmoke and the waltons.
thanks for another great review. keep up the good work.

Thanks for the comment. It would be interesting to see what TVMs John Carpenter saw and liked...

yes it would be interesting to discover which made for tv movies carpenter saw and liked and which ones influenced his own work.

Longtime late night staple from a bygone era. Nice connections to DEAR DEAD DELILAH and URBAN COWBOY (all favorites of mine), very much the way I compose my own reviews. Great job!