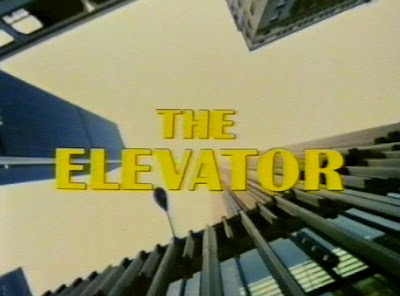 It was the 70s and disaster was in the air. We mostly got it via Irwin Allen, who made blowing up big things pretty great. The small screen got in on the action too – Allen himself produced some of them, including Flood (1976) and Fire (1977) – but their smaller budgets wouldn’t always allow for such grandiose detonations and many TV movies opted for a claustrophobic slant. Terror on the 40th Floor made a decent, but flawed attempt at this approach, but The Elevator managed its confined setting in much more assured ways. 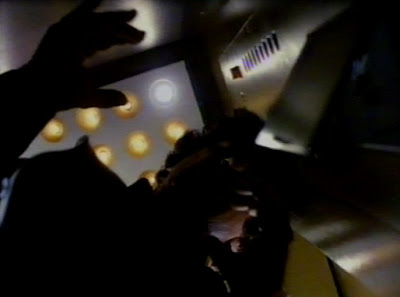 The Elevator is an all star event. Who knew you could cram Craig Stevens, Myrna Loy, Arlene Golonka, Teresa Wright, Roddy McDowall and James Farentino into one tin box? There’s even more packed in there, but those were the faces I instantly recognized. They are trapped somewhere between floors in a high-rise building that has closed for a long holiday. Even worse, the elevator seems to be stuck somewhere between the ten floors that are still under construction. On the outside are Don Stroud and Carol Lynley. Along with Farentino, this gorgeous threesome has just robbed and murdered someone in the building. Unfortunately, as Irene (Lynley) waits patiently in the getaway car, Pete (Stroud) is separated from Eddie (Farentino) and left outside the congested elevator. When Pete finally gets back to Irene, he realizes Eddie never made it and he has to re-break into the building. Eddie has a lot on his plate though, as he suffers claustrophobia and is not having a good time at all, especially with Amanda (Loy) gabbing on and on about a lot of nothing. She had ventured into the building in the hopes of finding a nice office for her son to lease. It is here she meets cranky leasing agent Marvin (McDowall), and he enlists Dr. Stewart Reynolds' (Stevens) classy office as an example of what this new skyscraper has to offer. This is pretty much how they all end up together on the elevator, which is set to plummet a few dozen floors at any minute. There’s also a rich kid who wants his trust fund to go directly into his teenage pocket and his mother who would like her son to be able to grow a beard before he can shop at Hermes. And Dr. Reynolds' wife (Wright) has also come aboard the deadly lift unaware that her husband has been knocking boots with his nurse (Golonka). 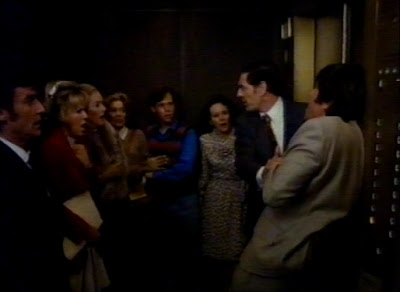 As you can guess, heavy melodrama ensues, and eventually Eddie just wants them all to save the drama for their mama and he pulls out his gun. He keeps creating problems for this motley band of potential victims while they work out their personal problems.

The Elevator is fairly suspenseful. Obviously, a huge chunk of the movie takes place in a very small setting, but director Jerry Jameson keeps things moving with the story involving Stroud and Lynley. Jameson would become an old pro at small screen disasters afterwards and would go on to direct Terror on the 40th Floor and Hurricane (both in 1974). According to IMDb, actor David Ketchum, who is probably best known as playing Agent 13 on Get Smart, co-wrote this movie with Bruce Sheeley and Rhonda Blecker (who IMDb lists as uncredited). This was Sheeley and Blecker’s only script and Ketchum’s lone TV movie, although he’s penned everything from episodes of Love, American Style to MacGyver. It’s an interesting scenario and well done. There were many moments I wondered how they were going to get out of that elevator or at least escape Eddie’s unfair treachery. For the most part, it all ties together nicely, although some stories are never resolved or hardly touched upon at all, such as Dr. Reynolds' affair, which is practically forgotten about in the first half. 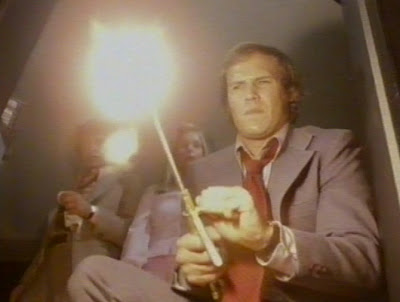 Marvin and Amanda are the most fun characters to watch and while you are pretty certain as to what Amanda’s motives are from the get-go, Loy gives a sweet, sympathetic turn as her story evolves and we see how loneliness often befalls the citizens of an urban landscape, despite their physical closeness to one another. I guess there’s a message there, but luckily it never interferes with the melodrama and action, making The Elevator a pretty great ABC Movie of the Week.
Posted by Amanda By Night at 8:54 PM

Email ThisBlogThis!Share to TwitterShare to FacebookShare to Pinterest
Labels: ABC Movie of the Week, claustrophobia, disaster, made for tv, melodramatic, suspense

Sounds awesome! Bet that was a great night of TV back in the day!

I remember this! There was another one about a cable car that scared the crap out of me.

Hi guys, thanks for stopping by!

This was a surprisingly good little "disaster" flick. I think I was expecting a little more Terror on the 40th Floor, but I thought this one did it better and was more suspenseful. Plus, that cast. Oh, the cast!

Love the theme by John Cacavas (Airport 1975 and '77, Satanic Rites of Dracula, Kojak).

@JSusskind: You're probably thinking of "Skyway to Death," starring Stephanie Powers and featuring Gomez Addams himself as an acrophobic who picked the worst day to challenge his fear of heights. (You might also be thinking of Irwin Allen's massively-expanded two-part knock-off, "Hanging by a Thread.")

I remember this movie, too. I was eight. I would love to see it again. I don't remember half these people in this thing tho, or their stories.

Nor do I remember the criminals. Amazingly what I do recall was Loy's story, what she revealed and that essentially she was the ending of the movie (Oh, that's a spoiler!)

I also recall the mother and son being Kim Hunter and Barry Livingston (Ernie from My Three Sons, Stanley then if it was him) and truthfully the events that played out with them. All very compelling.

I would love to see this one again.