Mary and Rhoda airing on Hallmark! 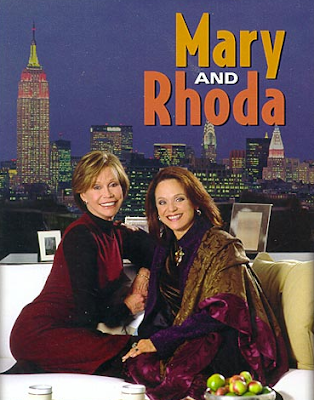 Despite the fact that Mary and Rhoda scored almost 18 million viewers when it premiered on February 7th, 2000 on ABC, I somehow managed to miss it. How did that happen? Two of my favorite TV girls reuniting decades later and I wasn't there! Where was I? I can't correctly recall now but I'm sure whatever I was doing, it wasn't nearly as fun.

Mary and Rhoda was originally intended to be a television series but the suits at ABC weren't happy with the pilot (suits = bah) and decided to have a one off film, which turned out to be incredibly successful, beating out that night's competitors (as if there were any questions!).

So, I was thrilled to see that the Hallmark Channel is airing Mary and Rhoda on Sunday, April 1st at 8pm! And to make life even sweeter, they are also hosting an all day marathon of The Mary Tyler Moore Show starting at 10am - after 4 episodes of the Golden Girls. I think this might be heaven. I know I say that a lot, but this time I do think this might actually be heaven, or at least sitcom heaven... Although I am sure the wardrobe won't be quite as groovy.

Here is the opening to Mary and Rhoda. And yes, that is Joan Jett singing the theme! My, how times have changed!

And check out the Mary and Rhoda page at Rhoda online.
Posted by Amanda By Night at 9:21 AM

This movie was so bad! Stereotypical and untimely.

I have to say - being a HUGE Rhoda and big Mary fan - I found the movie to be a bit of a disappointment. I didn't see it when it aired on TV - but it came with my well worn bootleg Rhoda DVD set and I've watched it a couple times, mostly cause when the last episode of the TV show is over I am always left wanting more - esp since it ends rather abruptly. I think if it would have come out in the early 80s it would have been much better.

God - now I want to start at the beginning and watch the whole series, including this movie, right now.

I am gonna watch. Don't remember it well from back in 2000. And hoping the MTM marathon has "Chuckles the Clown"!

Sorry but I have to agree with Carol. Starting with Joan Jett destroying the theme song, this great idea (maybe 15 years earlier) never made it off the ground. I am not sure if it was Mary or the suits at ABC, but this one just did not work. Thanks for the post though. I will probably watch as much of it as I can stand.

I'm a huge MTM fan, but I have to say this was unwatchable. Awfully done and so forced you might as well pretend it's not even Mary Richards nor Rhoda 100 years after the show ended. I still think they should have had a reunion show when Ted Knight died (the gang reunites to attend Ted Baxter's funeral in Minneapolis) and make it a special funeral a la "Chuckles, the Clown" episode.

Let it end. For the love of dignity, let it end and hire some new writers.