Killdozer is on DVD! 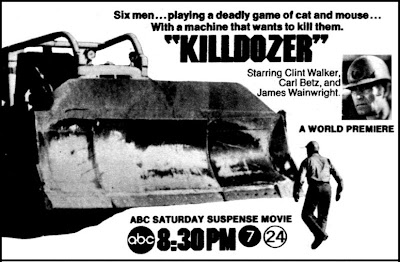 I have to give a big shout out to my friend Meep at Cinema Du Meep for letting me know that Killdozer is available on DVD through the Universal Vault Series! This is big news, my friends, because this weird little man vs. machine potboiler has developed quite the cult following over the years. Also, Killdozer, which originally aired as an ABC Movie of the Week on February 2nd, 1974 features an early performance by a young (and oh-so-handsome) Robert Urich. And who could forget the manly Clint Walker in a hardhat? Good times, people. Good times.

Good lord, who knows what else will be released now? Kate Jackson and Gloria Swanson's Killer Bees, perhaps? I hope I hope I hope!

Hi! Great site! I'm trying to find an email address to contact you on to ask if you would please consider adding a link to my website. I'd really appreciate if you could email me back.

Thanks and have a great day!

Thanks for the head's up BillyWitchDoctor. I think Urich's The Defiant Ones is also on Amazon. I need to save my pennies!

And I'm SO up for Killer Bees on DVD!

Madison, my contact info is on the sidebar on the right.