The USA World Premiere Movie Project: Are You Lonesome Tonight (1992) 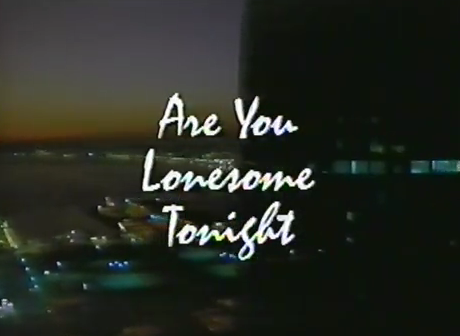 Contrary to popular belief, Are You Lonesome Tonight is not a Lifetime movie. The best television for women channel gets a lot of credit for much of the slick, somewhat exploitative, small screen fare, and sometimes deservedly so. However, much of their library was acquired from other networks that had a toehold before Lifetime’s complete stranglehold on saucy TV.

Case in point, although Lonesome seems to have garnered its somewhat murky rep from airings on Lifetime, it was a USA Original Movie. Like a lot of the small screen films at that time, it riffed on the big screen sexploitation thrillers such as Fatal Attraction and Single White Female. The underlying theme is sex sells, and it sells well, at least as noted by Laura (Beth Broderick), the suspicious call girl who embarks on a telephone affair with another woman's husband. The film starts with Laura, clad in her sexiest lingerie, engaging in some tawdry phone play with Richard Welles (Henry J. Jordan), a wealthy businessman with a frustrated wife named Adrienne (the ageless Jane Seymour). Adrienne overhears the call and wonders if maybe it’s time to end her marriage. But, before she can confront her husband, she hears a strange phone message from Richard that implies Adrienne may be a widow before she has the chance to become a divorcee.

Adrienne runs into Matt Henderson (a delish Parker Stevenson) at the police station. He's a retired-detective-turned-private-eye. At first, Adrienne is apprehensive about hiring Matt, but c’mon he’s friggin’ Parker Stevenson, and so Adrienne is soon compelled to spend every waking moment with him (smart girl). But not before she digs up Laura (Beth Broderick), the high price call girl who was on the phone with Richard when he was attacked. Does she hold the key to the mystery, or is she the catalyst for Richard’s disappearance?

Lonesome, which originally aired on January 22nd, 1992, isn't anything you haven't seen before, especially if you watch a lot of erotic thrillers. Like Murder By Night, the small cast makes it easy to tie certain crimes to certain people. But if you don’t go in expecting Hitchcockian twists and turns, you’ll probably enjoy this thriller's gauzy world. Aside from the complete nostalgic mind-trip the film puts the viewer through (paid phone sex? Where's Shannon Tweed?), there are some rather nice touches, mostly seen through Laura and Matt’s navigation through the upper class. Laura is determined to sleep her way to the top of the class system of whatever small and prosperous beach community Lonesome takes place in. Along the way, she mimics the upper class who is paying for her tricks, as seen with her glamorous apartment and luxury gym membership. Unfortunately, she also finds herself mixed up in a world of high level corruption. This isn't the world Laura wants, she wants what Adrienne has, as chaste as it is, but she'll never be able to break into that world despite the big bucks she’s cautiously stocked away. The message seems to be that high level corruption is OK when it’s committed by high level people, and it’s a lot less acceptable when the lower class tries to invite themselves into the fold.

Matt is the everyman, providing a few fish out of water giggles. Yes, he looks like a GQ model, but that tuxedo is never quite right! Stevenson’s performance is economical but extremely engaging, and he balances out the overt sexuality of Laura and the repressed frustrations of Adrienne. Yeah, I’m biased, but that Stevenson guy, he’s just right.

I have seen Lonesome three times, and for whatever reason, the film finally clicked on this last go. The class rivalry was a lot more apparent (thank you, Cultural Studies degree) and I found the dialogue to be somewhat rich and fascinating. Broderick is so great at the beginning of Lonesome, creating a persona of pure S-E-X. Everything is about getting some kind of tingly reaction from her gazers (or listeners), and for a movie that can’t show too much skin, she makes the most of it by exuding an animal magnetism. Once Laura becomes terrified of what may be happening to her, the performance loses steam, but she makes Lonesome a movie to watch. Recommended for a lazy Sunday.

Are You Lonesome Tonight is on VHS.

This looks so good. Need to see if I can find it on you tube. Love Jane Seymour.