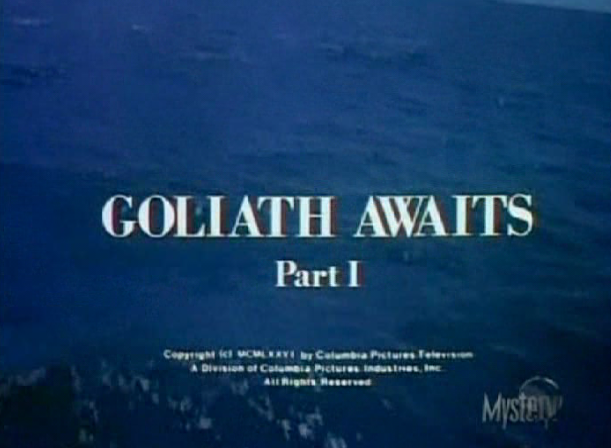 In a land far, far away, someone asked me to check out Goliath Awaits. I wish I could remember who that kind soul was, because I want to thank them from the bottom of my heart. My copy (taped off Encore Mystery) was sheepishly looking at me while the poor thing gathered dust. Although that certainly sent pangs of guilt to my very core (well, not really, but I did feel bad… I swear), I let it sit on the shelf because I am always hesitant to watch mini-series. Truth be told, I’ve always been like that because I feel like I’m making some huge investment and I won’t be able to carry my mission through. Failure sucks, and I avoid it! What’s crazy is that I tend to love all the mini-series I sit down with, yet I still find that aching hesitation persists. Yes, I’m a mystery to myself sometimes.

Filmed on the Queen Mary, and featuring an incredible cast, Operation Prime Time went overboard (pun intended) with their epic lost ship thriller Goliath Awaits. Starting in 1939, a large British luxury liner is sunk by several Nazi torpedoes. Jump 40 years ahead and a crew in search of oceanic minerals picks up the shell of the great liner Goliath on their radar. Eager to salvage the wreck for treasures, they are surprised when they get a small submarine vessel near it and hear an S.O.S. signal! The military quickly puts together an operation to investigate the sunken ship and soon the world finds out that many of the passengers survived, and now live in their own world, made sustainable through an air bubble. While most of the top crewman died, one man who had a knack for inventions helped the survivors build a garden, create electricity, and, in short, live. Rising to leader, this man is not so hip to be rescued and he intends to thwart any and all plans to bring the survivors back to the real world.

Goliath Awaits is an epic mini-series that ran over two nights and is brimming with several almost-a-star appearances. The mini-series caught Mark Harmon between the short-lived series 240-Robert (1978 – 79) and the nighttime soap Flamingo Road (1980 – 82), and he had a few years to go before he hit superstardom fame as Dr. Robert Caldwell on St. Elsewhere. His charm and magnetism already apparent, he makes a likable hero for the passengers of the Goliath. His love interest is the plucky Emma Samms who was just a couple of years away from becoming a soap opera star on General Hospital. Other up and coming faces include Duncan Regehr (V) and Robert Forster, an actor who already had a stellar resume, but was years away from Oscar nominated and household name glory in Jackie Brown (note: Regehr and Forster would appear together again in the trashy sex thriller The Banker, which is great fun if you love the erotic thrillers of the 90s… and you know you do). Lori Lethin (Bloody Birthday) also appears as Samms tragic best friend. These relative newcomers mix with handsome Alex Cord and three of the greats: John Carradine, Frank Gorshin, and Christopher Lee. This fusion of fresh and classic faces works beautifully to make for a good night(s) of entertainment!

Christopher Lee’s chilling and heartrending portrayal of Captain McKenzie is perfection. He manages to walk that fine line of dictator jerk and reluctant hero, sustaining some level of compassion for his character. The same cannot be said of his right hand man Dan Wesker (Frank Gorshin) who is utterly terrifying in his devotion to McKenzie. The dynamic between these two could constitute its own movie, and while it’s not given a huge amount of attention through the film, there is enough background to make each character compelling. While the entire cast gives superb performances, the film really belongs to McKenzie and Wesker’s bizarre bromance.

Buyer Beware: Goliath Awaits did get a release on VHS, but in an edited form that cuts out some of the most intriguing stories. I’m not sure when I taped my copy off of Encore Mystery (I haven’t had pay channels in, like, forever), but perhaps the TV gods will abide. It’s a film that is definitely worth seeing.

Man creates a world; gets a chance to leave and suddenly becomes adamant about not leaving. Like that hour long Twilight Zone episode whose name escapes me now.

"On Thursday We Leave for Home." James Whitmore, I think, is the leader who tries to convince his group to stay on their desert planet instead of returning to Earth with the rescue ship. He stays--alone--and at the last minute changes his mind. But, it's too late