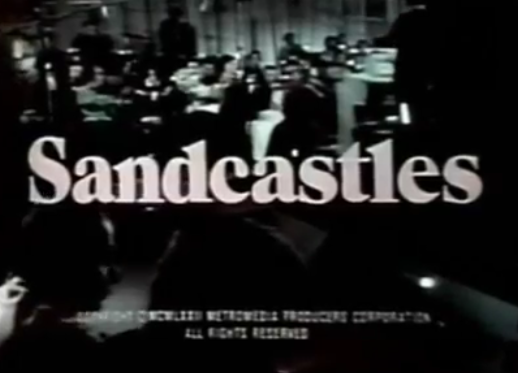 I’m a sucker for romance. And the soapier the better, I say. I was surprised to find out earlier this week that I actually do have soapy limits, and Sandcastles comes pretty darn close to pushing the boundary that separates sentimental melodrama from overwrought hysteria. But by the end of it all, I was a gooey mess of snot and tears, so, you know, job well done! 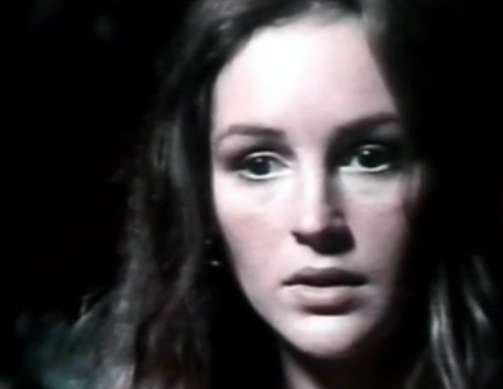 Bonnie Bedelia is Jenna, an overly romantic orchestral musician living in Los Angeles. She spends way too much time fantasizing about an angelic blonde man, who she believes is her destiny and one true love. Unfortunately, she’s concocted this guy in her head. But… On the other side of California, near San Francisco, lives a drifter named Michael (Jan-Michael Vincent), an angelic looking blonde man, who has no idea that he’s someone’s great love. He’s a drifter, living mostly wherever he can find a job that will put a roof over his head, but will also allow him the freedom to roam if he so chooses. Currently, he’s hooked up with a good-natured restaurateur named Alexis (Herschel Bernardi), aka Papa Bear, an eccentric and thoughtful man who has come to love Michael as the son he never had. But Michael’s wayward spirit gets the best of him and after Alexis raises some much needed money for his business, he gives $20,000 to Michael to deposit at the bank. For reasons even unknown to Michael, he hits the road with the money, but quickly has a change of heart and calls Alexis’ wife Sarah (Mariette Hartley) to let her know he’s coming home with the cash. 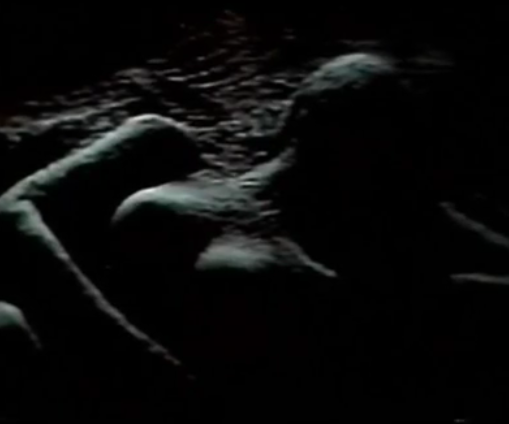 Unfortunately, the ride he hitches out of town just happens to be with a slimy opportunistic alcoholic named Frank (Gary Crosby). This leads to a horrible car accident that creates an intersection between everyone’s lives. Jenna, who happened to be on her way to Frisco is the woman who holds a dying Michael in her arms. But his ghost soon returns to the beach near Alexis’ restaurant, because this is where he’d spend his days building gorgeous sculptures in the sand, and he soon starts a relationship with Jenna. Drawn to her own fantasy world and the (now literally) angelic Michael, she refuses to recover the money that Frank still has in his car. She knows that if she helps Michael fulfill his responsibilities to Alexis, he’ll be able to make that last journey, leaving her forever. 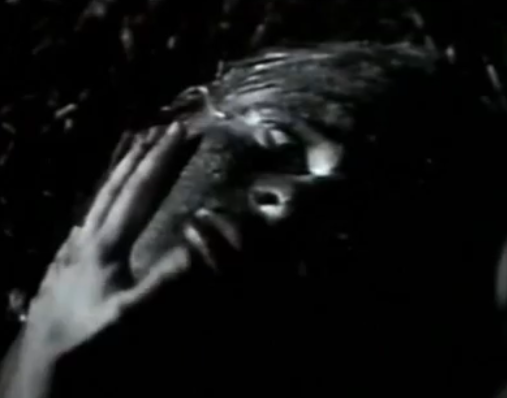 Directed by Ted Post (Do Not Fold, Spindle or Mutilate, The Baby), Sandcastles is more famous for its filming technique than it is for the story. It was the first small screen film to employ the single camera videotape method. In an attempt to save money, the film was shot with a Norelco, in Malibu and at the CBS Studio Center. However, the equipment was too new and expensive, and the process too time consuming and faulty. Eventually the video was transferred to film, giving Sandcastles a bit of off-putting effect for some viewers, who commented that the aesthetics lent itself more towards episodic television than a movie. Nevertheless, the overall eeriness of the story and the beautiful locales make Sandcastles a truly wonderful time capsule. 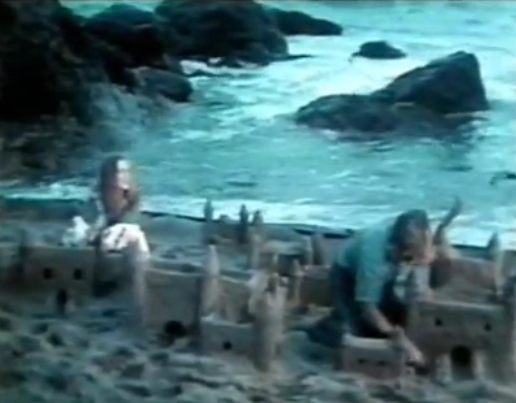 Shot in twelve days, with much of the story unfolding amongst crashing beach waves, Post joked in an interview about the difficulty of getting the sea to “act” on command. He must have gotten the ocean to listen though because he caught some exquisite footage and produced a moving portrait of haunted people, ghostly love and learning to let go. 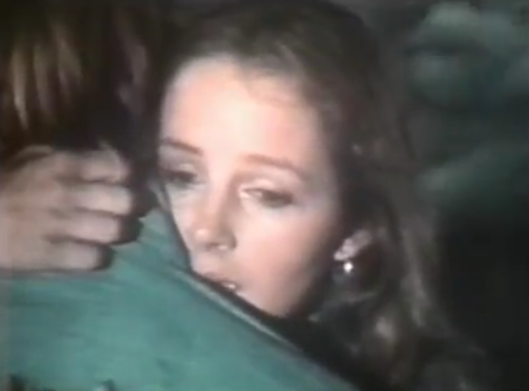 Still, Sandcastles doesn’t just tug at the heartstrings, it wants to yank those suckers right out of your chest, and there are a few overly syrupy and talky moments throughout the film, where everyone only speaks of love. But, dammit, it works. Maybe it’s because Michael is so emblematic of the times – a leftover from the hippie movement whose universal dream of peace and love dies when he does. At the same time Jenna continues to believe (and rightly so as it turns out) that love doesn’t have to end, coincidences can mean something greater, and moving on doesn’t mean leaving anything behind. 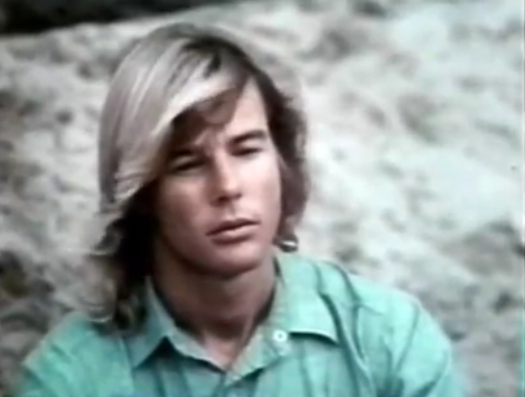 Bedelia is wonderful in the role as Jenna. Her fantasies and idealism keep her from venturing out into the real world, and the actress captures that sweet innocence of the romantic daydreamer, almost achingly so. It doesn’t hurt that Vincent is at his loveliest as well, with a thick blonde mane and a tummy you could bounce a quarter off of. **Swoon** 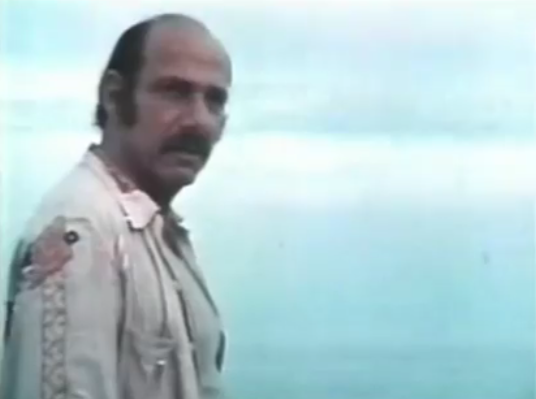 But this is really Bernardi’s film. Alexis is thoroughly tormented by Michael’s disappearance, but refuses to believe he’s stolen the money outright. Alexis can’t come to terms with this alleged betrayal of his “adopted” son, and, then his death, and he nearly comes to deadly blows with Frank (and definitely beats the crap out of him!). The loss and anger is palpable, and carries the film from outright melodrama to tragedy. Despite his roaming nature, Michael has a profound ripple effect, impacting everyone’s lives. I think I'm getting misty again... 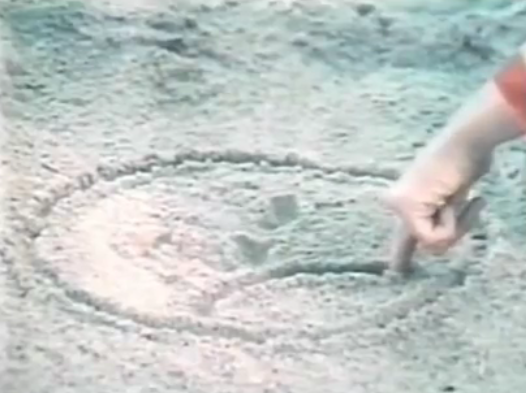 Michael's sandcastles and sculptures are an overt metaphor. The ocean constantly destroys them, and he has to keep rebuilding them, much in the same way everyone has to rebuild their lives after Michael's death. The overall message about enjoying life and beauty in the moment because they could disappear in the blink of an eye is timeless, and Sandcastles tells this story well. 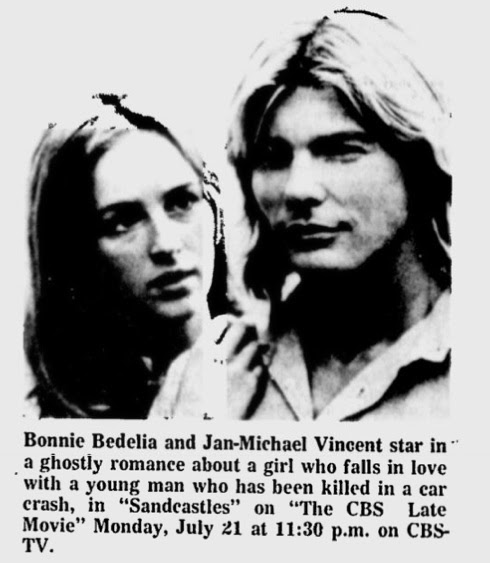 Wonderful write-up! As a very long-time admirer of Mariette Hartley this was one that I watched when it was first on and recently caught again. Definitely full of nice performances and memorable for the lovely coupling of Bedelia and Vincent and the vigorous Bernardi. Definitely a product of its time and so good that it is!

Wonderful movie. I saw it many years ago and have been looking for it for years to no avail. I am a sucker for love that transcends all. Finally saw it on Fox movie channel.it has a deep special meaning. Nice blog!

This movie would make a fantastic updated remake. It's a little gem that no-one has grabbed yet. I really wish someone would come along and redo this one. A couple of years ago, I saw this again on Amazon video. I was only ten years old when this came out, but saw it as a teen later on a repeat. Never forgot about it either. You know, if they do this right and use at least one well-known actor/actress, the updated version could be as popular as Ghost was. We haven't had a good ghosty love story film in a long time.