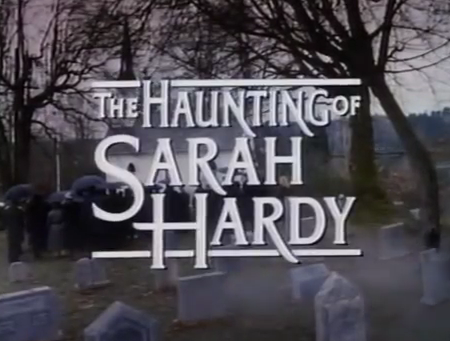 
It is Strange that The Haunting of Sarah Hardy ran in May of 1989 instead of October, because this moody and fun telefilm has the Halloween season written all over it! Shot in Oregon at the Pittock Mansion (but with the estate’s borders made to look like it was perched on a seaside cliff), Sarah is all about atmosphere. The wonderfully gloomy skies and twenty-two-room estate give the film oodles of ambiance (Morgan Fiarchild’s pink sweaters help the cause greatly as well). Aesthetically, this is a grayly lit mood piece; story wise, Sarah is a surprisingly dark tale of loss, guilt and betrayal. Morgan wise, it is all kinds of awesome. In short: S.O.L.D. 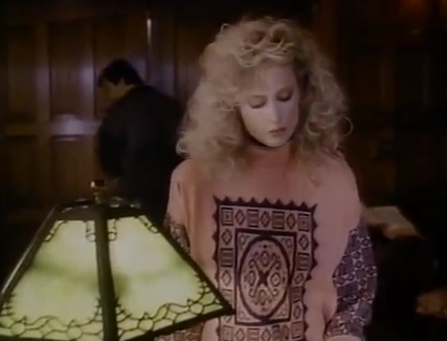 Many a creepy ghost tale is built on childhood trauma. But perhaps none did it as obnoxiously as The Haunting of Sarah Hardy, which features a tragic but annoying opening sequence where a funeral turns intensely sinister after her crazy mother walks into the ocean and drowns herself (drama queen!). Luckily, Sarah grows up to be Sela Ward, a more likable version of young Sarah, and life seems to have picked up for her. She’s recently married a hunk of a man named Austin Hardy (Michael Woods), and her lifelong friends, Lucy (Morgan Fairchild) and Allen (the oh-so-gorgeous Roscoe Born) are still thick as thieves (maybe). But despite enjoying a few years of normalcy, Sarah is still haunted by her past, which seems intent on destroying her. 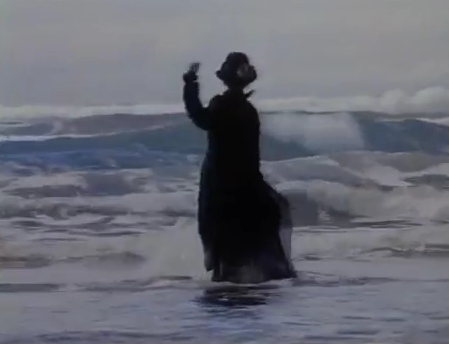 Sarah has had a tragic life. It gets a little more tragic as the film goes along. We feel bad. And that’s important. Sela Ward keeps Sarah likable and sympathetic. While everyone in her life seems sincere and loyal we know at least one of them is on the make, but there are enough twists and turns so that when the story goes into more obvious spots, it also keeps the viewer on their toes in other places. 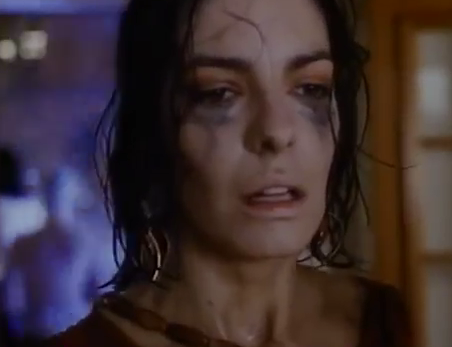 One of the things I like most about the USA World Premieres is that, while they were producing movies at the end of the "Big Three" network's telefilm run, a lot of their productions felt as old school as those classic Movies of the Week from the 70s. The ghost stories and other traditional tales always stand out to me because it seemed like USA was taking a page out of the TVM history book, and, if not necessarily putting any kind of unique spin on it, gave this tried and true formula a slicker, updated look. Don’t get me wrong, I will always be drawn to bell bottoms and sideburns (and not with any kind of hipster irony either), but when USA sets out to do the classic small screen thriller right, they rarely let me down. 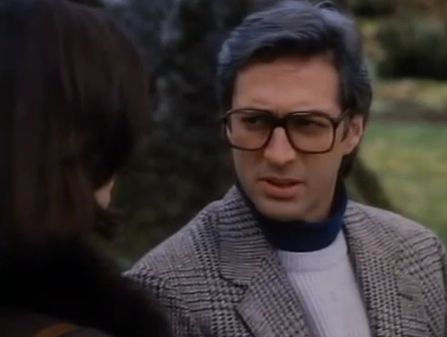 The cast in Sarah is wonderful. The late Polly Bergen has a fun red-herring role as the priggish Miss Stepford (the last name must be a clever nod). Bergen really enjoyed the part but said they originally tried to tinker with the character, feeling she needed to be more glamorous. In an interview Bergen remarked, “Did you see that makeup? They sent me the script, and I was immediately caught up in playing this little old lady with support stockings and sensible shoes and wire-rim glasses. So they decided to glamorize the part. My agent said, “They don’t precisely want to pay you dollars, but they’ll give you a Giorgio Armani designer wardrobe.” I said, “Wait a minute. I want my money. Let them keep the wardrobe.” So I played it the way it was originally written, and I got my money besides.” 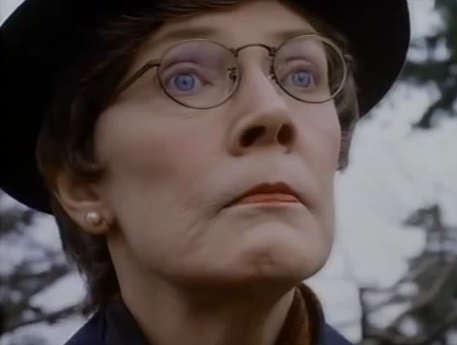 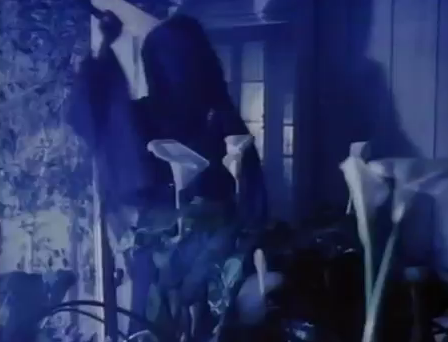 I don’t remember watching Sarah when it originally aired on May 31st, 1989, but did catch it some time later, and taped it. Having forgotten most of it, I revisited a few years ago and was surprised by how much I enjoyed it. Giving it another go this past week, I was surprised yet again (as I had forgotten the excellent twist ending, which is mildly predictable but still effective). This is a beautifully atmospheric old school chiller. And one that is well worth spending a little of your Halloween time with. It definitely gives out more treats than tricks. 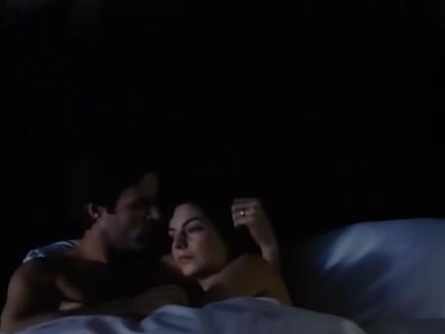 My only real issue with this late 80s telefilm is that, after all is revealed, not much makes sense. I’m not looking for every loose end to be tied up, but most of the ghosting, scheming, sneaking and duplicity seems to have been for naught… for everyone! If only someone had given that tortured Sarah Hardy a break! 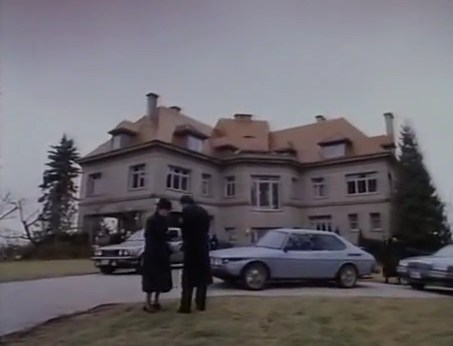 Sounds like a great flick! Know if it is up for viewing anywhere?

Sounds interesting - I make a point of always watching everything Morgan Fairchild has been in but this is one of the few ive never seen.
Can I ask a favour please...would you ever do as feature on Christine Belford, who did so much tv in the 70s and 80s, she was one of my favourite actresses. she used to play Carly Kirkwood on 'Banacek' and was the nanny on season two of 'Dynasty', as weel as the murder victim on 'Sparkling Cynaide' and Baroness Von Gunther on 'Wonder Woman' plus her several appearences on 'Hart to Hart'.

Karl, I really like Christine Belford! I know her mostly from 90201 and all the guest spots she did (she's in a Magnum P.I. that I love)... wasn't she Ricky Schroeder's mom on Silver Spoons?

I would love to do a write up on her, I just can't promise when. I'm so busy with school right and am hoping to get to some reviews for Halloween, but I'd have to research Christine and that will take a little while. She's great and does deserve a little love, so I'm putting her on my list of things I want to write about!