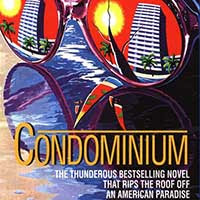 Network: Syndication
Original Air Date: November 20th, 1980
A glitzy, glamorous television disaster mini-series? Yup, and it's just about all it's cracked up to be.

Condominium purports to be a "Playing ground for the rich," but most of its tenants are living on fixed incomes. But never you mind, these blue collar workers manage to fit all kinds of scandal into their everyday existence in the most shoddily built condo building in history...

Steve Forest (with a slightly masculine John Waters mustache) is Gus Garver. Recently retired, his wife Carrie has just suffered a stroke. Enter Sam Harrison (Dan Haggerty), Gus' best bud and a kick-ass-world-traveling-construction-and-engineering-man. He's shown up to Fiddler's Keys, Florida to help Gus out with Carrie (Virginia Leith). Instead, he gets introduced to the tenants of the condominium. Brash, snotty and extremely unhappy, this bunch loves to complain about the state of the building but refuse to leave for fear of losing their investment. Still, if they can get the homeowner's board to listen, they will bitch and moan as much as possible.

To make matters worse, the lecherous building manager, Julian Higbee (Larry Bishop), ain't working for the tenants and anything that needs to be fixed can be paid for on the side or they can try talking to Marty Liss (Stuart Whitman), the owner of the company who built the building. Anyway, Julian is too busy either napping or schtuppting this nurse named Bobbie (Carlene Watkins) who lives in the building, much to his wife, Lorrie's (Mimi Maynard) chagrin. The general hatred for Julian can be detected when the spicy Carlotta Churchbridge (Linda Cristal, who seems to be the comic relief) actually starts slapping him around. And he still won’t fix her plumbing!

Life continues on for the tenants but things start to heat up when Gus gives Marty and his lovely assistant Drusilla (Pamela Hensley looking divine) a visit, bringing a thinly veiled threat that the tenants will vacate the building all at once if Marty doesn't fix the problems.

But Marty is too busy stabbing the mob in the back to really care what these moderately successful dwellers want or need. Sam starts doing some quiet investigating on the structure of the building in the hopes that he can help his old friend Gus begin legal action. What Sam finds is that when the next big one hits, this building will be the first to go down.

Condominium is an interesting mixture of romance, scandal, drama and disaster. Viewers might be put off by the nearly 4 hour time length, but there's enough soapy goodness to make the time fly. Barbara Eden is particularly engaging as Barbara Messenger and the story involving her dying husband (Ralph Bellamy) and a probable triangle with Sam is dealt with in a suprisingly unsleazy and thoughtful manner. Some of the subplots are really out there though. Like the one with Thelma (Ana Alicia) and Jack (Don Galloway). Thelma is this childlike creature who wanders the neighboring forest communing with nature. When Lis pulls a fast one and begins to tear up the land, Alicia falls into a hysterically hysterical fit before she goes into a catatonic state. Don't get me wrong. I love Alicia for her over-the-top hysterics, but when put up against the caliber of the rest of the cast, her overwrought performance can't keep up, leaving Galloway with little more to do than act angry.

The most dignified performance comes out of Pamela Hensley who adds a real touch of class to her part as a woman who isn't as evil as she'd like us to think she is. Her character also develops the most and is by far the most interesting to watch (although I prefer Eden's wardrobe to hers).

The disaster part is great. The money shot is offered up via miniature sets and a nifty "Hurricane Party" with the tenants who refused to vacate the building. Well, I don't have to tell you how that one turns out, but I will say its messy!

Condominium is an enjoyable romp through the world of early 80s television melodrama that never ceases to entertain... a feat in and of itself. Based on the novel by John D. MacDonald, this movie has fist fights, lesbian sub-text (OK, not so sub), hot pants, lots of liquor and Artie Johnson as the geeky guy. What more could you ask for? 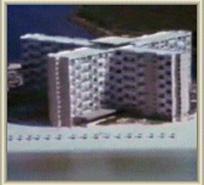 Don't minatures rule?!?
Posted by Amanda By Night at 4:01 PM

I have to agree with you, the 80's never ceases to entertain with it's shmaltz, cheese, soap opera, over the top glitz and glamour! Especially I'm finding the early 1980's. lol. I vaguely remembering hearing of this flick, it would be cool to watch I'm so fed up with current tv and most movies, I am going back in time with my tv omni to this decade and beyond.

Condominiums is were the perfect type of housing to accommodate the changing needs and lifestyles.

I missed this one but you make it sound pretty damn good - and yes, miniatures absolutely rule!

I'm confused by the caption, "don't miniatures rule". The condo is real!! I live there part time!! It's called Pinnacle Port and is located directly on the beach in Bay County, Florida. ;-) https://www.google.com/search?q=pinnacle+port+condo&source=lnms&tbm=isch&sa=X&ved=0ahUKEwjhyOLqzNrZAhVJA6wKHa8uAM0Q_AUICygC&biw=1368&bih=782

My dad's company, Peppertree Condominiums, built the "White Elephant" that John D MacDonald's book was based upon. When Hurricane Eloise destroyed the gulf coast in Panama City Beack, FL in Sept 1975; this condo, known as the Peppertree (which never opened because it wasn't properly retrofitted) was destroyed in the storm. In 1977, the book came out about this "Condominium" and in 1980, Dan Haggardy and Barbara Eden came to town to film scenes for the movie! I got to meet Dan and had pictures taken with him.