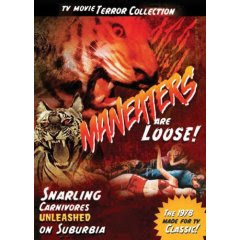 
A traveling carnival worker (who is also a suicidal drunk) releases his two tigers just outside a small town. Once they get a taste of human flesh, it’s up to Steve Forrest and Tom Skerritt to even the score. Unfortunately, the frolicking tigers seem more cute than dangerous. Still, the hunt is on! And along with uncovering the tigers, some small town secrets also come up for air.

Maneaters are Loose is another one of those nature gone amok flicks that were so prevalent in the 70s. There are only two “man eaters” in question, so the mayhem is kept to a minimum. That makes some of the running time feel really padded out, however, there are some interesting twists. As word of the escaped tigers spreads across town - so do random scandalous secrets which threaten to doom some of the more upstanding citizens - that is if the tigers don’t get 'em first! What starts out as an extra-marital affair leads to an animal attack and ends up liberating all kinds of hidden stuff about the locals. This is a nice change of pace for the animal amok genre, as most of them strictly follow the Jaws route for all it’s worth.

When it comes to these kinds of movies, I always wonder what the initial reaction was among adults back in 1978. My connection to these movies is mostly based on childhood recollections and often I find that I can still watch these movies through the eyes of a child (which makes it tough to be critical, but I’m not here for that). It’s fascinating to think about the thousands of grown ups who were glued to the television when this aired. Fluffy tigers attack town while Harry Morgan goes nutso. Musta been fun!

The cast is great, with Morgan putting in an extra nasty turn as Toby Waites, the lecherous preacher. His comeuppance is most deserved and roused a cheer from me. Lots of other famous faces abound too like Forrest, Skerritt, Dabney Coleman and Diana Muldaur (I LOVED HER!) who all warmly round out the cast of seasoned players. This movie was based on a novel by Ted Willis simply called Man-eater, which I just ordered online for under a dollar! This will make a nice addition to my growing collection of books that were spun into TV Movies.

Saw this one back then! Don't remember much at all about it! I love your book collection! Have you done a blog feast featuring those novels turned into TV movies? If not, would you?

I've done a couple of attempts at writing about books made into TV movies, novelizations, etc. Here is one I did over the summer:

I also did a "From Novel to Screen" type of thing with Crawlspace:

And I've wanted to do more, but just haven't had the time. That said... I am out of school for now so I should just either go all out or at least do another review like I did with Crawlspace. I keep thinking this needs to happen with Sweet Hostage! :)

And thank you for all the comments. Always nice to log on and see a conversation started. Much appreciated!