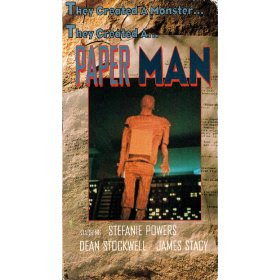 Paper Man is a prophetic television movie that captures the primitive look and feel of the early computer systems with a far more elaborate and modern storyline that is just now coming into play in a big way.

Paper Man is about a group of college students who create a fictional person with the school's computer to obtain a credit card. Mostly done for laughs, things seem pretty mundane, if illegal. Only when an unknown someone in the group buys a gun with the card, do ears start to perk up. Then, one by one each of the students begins to turn up dead... killed by some electrical or computerized force (the scene with the killer robot is absolutely chilling). 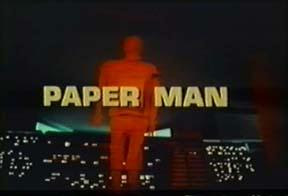 Paper Man came out all the way back in 1971 (the year I was born!), when a mainframe took up an entire class room. There's lots of blipping lights and funky noises, but the overall theme of the film remains quite relevant. At the time, credit card fraud/identity theft via the computer must have seemed the thing of science fiction (hence the premise) but is sadly an every day occurrence in our modern times.


The cast is great, with Dean Stockwell, James Stacy and one of my all time favorite actresses Stefanie Powers leading the way. The mystery of the killer is solid and is played out nicely. Walter Grauman's direction is top notch. The scene featuring a death by elevator is gruesome and quite suspenseful.


Paper Man is one of the lucky television movies to find a home on DVD. Granted, it's been released on those cheap $1 discs you find at various car washes, drug stores, etc... but it is such a treat when you do come across it! If you see it next time you are buying shampoo, do pick it up! This is the version I found

Email ThisBlogThis!Share to TwitterShare to FacebookShare to Pinterest
Labels: ABC Movie of the Week, sci-fi, thriller

Dean Stockwell?? I am so gonna keep my eyes peeled for this little movie! He's awesome! That giant robot on the cover looks like he's made of paper, the brown bag kind, LOL.

You've made my day! I've been looking for the name of this tv movie for years and years and years. I only remembered the plot, but none of the actors. Thank you so much! :)

By the way, awesome blog!

Glad I could help. It's a really good movie. I've seen it a bunch of times!

Ginger, it is kind of ghetto Paper Man, but there's lots of creepy stuff, I swear! :)

I saw it when I was a teenager and it recently popped into my mind and I went looking for it. Netflix has it. It's a great plot, and okay acting, but the video quality is poor. Paper Man was part of a series of made-for-TV movies bill as "Original Dramas" on, I believe, ABC. I would love to see a list of movies in this series. The only other movie in the series that I remember was "The People" which starred William Shatner. I haven't been able to find that one.

Some research shows that my previous post was in error. "The People" was an ABC movie of the week, but "Paper Man" aired on CBS. So much for my degrading memory.

I apologize if I'm linking too much!

I like the linkage Craig... Thank you!! I added you to my blogroll, btw.