A classic of the made for television genre, Bad Ronald is an almost perfect time capsule of what television filmmakers were trying to accomplish. Quiet, claustrophobic and disturbing, Bad Ronald gets better with each viewing. A killer smile!
Ronald (Scott Jacoby) is a lonely mama's boy. On his birthday, he gets the gumption to ask a female classmate to a movie. When she refuses (and brutally so), he takes it out on a taunting little girl and accidentally kills her. He confesses his crime to his mother, who walls him up in the bathroom located in the center of their house. Here is where Ronald lives, coming out only at night (through a hole in the cabinets) for food and conversation. He spends his days studying (because his mom believes he will still become a doctor), doing his exercises and creating the fantasy world of Atrana. One day his mom checks into the hospital but doesn't check out and soon after, a new family moves in (lead by Dabney Coleman!). Ronald, who has now been fending for himself with nothing but chocolate and a fantasy world, gets really bad. He drills holes in the walls so he can watch the daughters. The youngest girl bears a striking resemblance to Princess Vancetta of Atrana, so guess who Ronald puts his sights on? First clue, it's not this nosey lady!
I watched this movie a couple of years ago with a group. What I remember most is that people who grew up on these television films in the 70s were enamored with Ronald, while the younger ones found it boring. For me, it's impossible to imagine someone thinking Bad Ronald wasn't this super disturbed horror fest, but you know, I'm old and stuff... Like Gargoyles, this is a movie where it helps to be a fan of the sub-genre.

Having said that, I love this movie and think it's damn near perfect. I still have a difficult time getting what the naysayers are nagging about, and Ronald remains one of the best films of the decade. The build-up is agonizing and the payoff (i.e. the scene with the peephole) is abso-freaking-unbelievably terrifying. I love making up words! 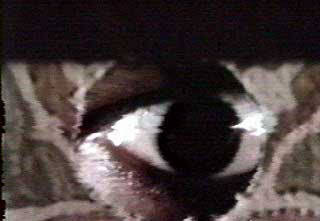 The money shot!
Ronald is also not that unlikable... at first. He's kind of a sad sack. Pining for acceptance, but still perfectly comfortable with his mother and not regretful of their relationship. He's confused and lost and Atrana aptly captures his deep need for friendship.

Scott Jacoby was an amazing actor. He was nominated for an Emmy for his performance in the excellent tele-film That Certain Summer, and he always put his all into every film he starred in. Most recently, I saw him in Smash-Up on Interstate 5and really enjoyed the layers he gave to his character. Like Ronald, he was someone you rooted for even though you were a little afraid of him. He worked on into the 90s, mostly doing direct to video horror towards the end. He made some good movies... but I think for most of us, Bad Ronald will remain his tour de force. 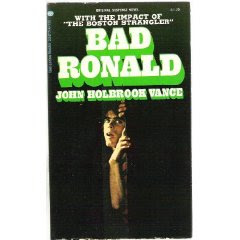 Here's a look at the elusive book that started it all! 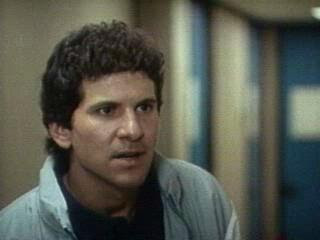 This pic looks to be him circa the 90s. Still a cutie!

Totslly remember watching this one over at my maternal grandmother's house. Not sure what I was doing over at her house so late - in Illinois prime time TV goes from 7pm - 10pm - and this movie would have aired 8pm - 10pm or 8:30pm - 10pm.

It creeped me out as a kid - there are images from this movie still in my head 40 years later. I have added it the video vault recently and look forward to watching it - probably during October's All Horrorthon.

And since we're on the subject of Scott Jacoby - gotta give a shout out to Billy Jacoby - who was in a lot of good stuff a few years after this.

I love all of the Jacoby's! What a talented bunch of guys! I love Billy best in Just One of the Guys (and I'm on his facebook... cuz I'm a nerd!).

Bad Ronald has held up surprisingly well. I think a lot of TVMs benefited from their intimacy. It still works (at least for me)!


Two other great performances by Scott Jacoby were in "Rivals" and Baxter! He was also good in The Little Girl Who Lives Down the Lane.