OK, this review fits. Think about it. A television show made into a theatrical film that feels like a made for TV movie! Wow. Everything I’ve dreamed of and more!

I’ve been a long time fan of the X Files from episode #1. At that time, only one other person I knew was watching the show. How surprising it was that a year later it had become the biggest thing going around. I went to the conventions, I’ve met some of the actors and a group of friends and I used to meet every Friday to salivate over that night’s episode. I collected every book, magazine and book on tape I could get my hands on and spent hours hypothesizing over why Scully chose not to believe.

At some point, this phenomenon, at least for me, kind of burned out. I watched the show until it ended, but I lost that fervor I once had just a few seasons before. I’m not sure what changed in me, but I do know it wasn’t just the show. Yeah, it wasn’t the same after Mulder left, but it was still one of the better shows on television. I think I was just growing up and responsibility took hold over entertainment. Those are bittersweet memories for me.

I Want to Believe brought back some of that feeling that I had in the beginning. It’s basically an episode of the show shot for the theater. It’s a good idea to check any preconceived notions you may have at the door. This is not Fight the Future, which was a mind boggling, epic version of the series. It was good, but it’s not this movie which harkens back to the first few seasons of the show, when it was just finding its true strength. I Want to Believe is far more cerebral than Fight could ever hope to be. This movie reminded me a lot of the episode Beyond the Sea (Season One, Episode Twelve), which is the episode where Scully first has to deal with the contradictions of the faith she was brought up on and the idea that something else is out there. In fact, Beyond is referenced in I Want to Believe. A couple of other episodes are too (like Clyde Bruckman's Repose), but this is the one that sticks. 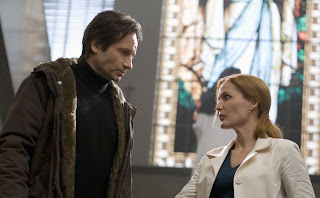 Six years have gone by and Scully has given up the bureau and taken a gig as a medical doctor at a Catholic church. Even here, Scully is constantly questioning her faith as she wonders why a God would bring a child into the world only to take it away. But for Scully, this lifestyle has become preferable and she’d rather only think of the X Files as something from her past. She is now completely coupled with Mulder who spends his days as an armchair investigator, ripping various articles out of papers in the desperate hope that he can find something… anything that will have made his years with the FBI worthwhile. When a FBI agent goes missing, Mulder and Scully are pulled back into the fray of bureaucratic red tape and adversity. Here they encounter an ex-priest convicted of pedophilia. He claims to have extrasensory powers and is helping the FBI locate the agent. Aside from being a potential con-artist looking for attention and redemption, he also brings up all those questions Scully had been tangling with.

I Want to Believe is great, but I’m not sure why it was released not only in the summer months, a time for giant action packed blockbusters, but also released one week after the mega-hit The Dark Knight. This is the kind of movie that would fare much better in fall, when audiences are more prone to watching smaller, more character driven stories. Ultimately, I Want to Believe was a box office flop, but as a film that makes you think, and as one that draws you closer to two of the best characters the small screen ever saw, this movie is nothing short of a spectacular winner.

I've seen a lot of X-Files, but not every episode - I was kind of mad at it in 1995 when the series I was working on - American Gothic - aired at 10PM on Friday nights - right after the X-Files ended its 9PM airing on Fox. The XF fans should have loved AG - but they turned off their TVs at 10 and went on to the then-new internet to hash out the latest XF episode in online forums instead of watching my show. AG only lasted one season. Dammit, X-Files!

I let that go and caught up with the show's middle years, but I drifted away when the original stars left. I did see the first movie, but I haven't seen this one. Your review has put it in my To Watch pile! Thanks!

I am one of those people Craig. I totally missed American Gothic and have only seen a few episodes since it first aired. I am ashamed. My husband is a big fan though I hope that makes up some of that! :)

I do hope you check out I Want to Believe. It's a pretty incredible little movie!

PS - You worked on all the cool projects! Jealous!