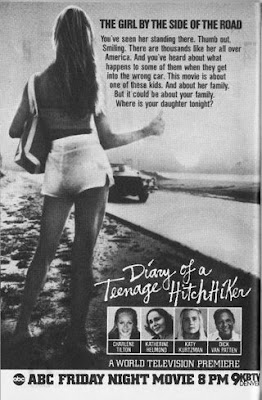 There are so many OMG moments in Diary I just don’t know where to begin! I mean, the cast is to die for! It’s got Christopher Knight, Dick Van Patten, Dominique Dunne, Katherine Helmond, Craig T. Nelson, Richard Sanders and a very young Charlene Tilton in the lead. It’s got chicks in bikinis hitchhiking, scary assault scenes, car chases, a burger joint on the beach and architecture! It was directed by Ted Post who made the wickedly wicked movie The Baby! I mean, it’s got it all! Tilton is Julie Thurston, a pretty small town girl getting ready to cross the threshold into womanhood any day. She works at a burger stand on the beach so she can save up for a car (dad works hard but inflation is unbearable. Uh, can’t his wife get a job?). She also has a tight group of female friends who are ready to party. One already did and is pregnant (Dominique Dunne as Cathy). They all thumb rides to get around and although wary of the dangers that lie ahead, each swears they need to do it to maintain their independence. Sure. 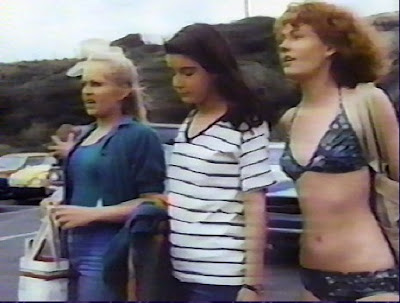 First Cathy is raped and next Dana is killed when the same rapist picks her up and then takes the police on this crazy chase. Still, nothing is going to stop Julie from living her dreams, which she apparently has to hitchhike to. But her ride is just around the corner, if you know what I mean. Totally great exploitation film for the small screen that can’t play up the on the gratuitousness a theatrical could, but still does what it can with the elements – half naked girls who love to party, car chases, violence and Dick Van Patten. I mean, it’s just too much! Diary is a surprisingly good movie, obviously made to cash in on the real life tragedies during the hitchhiking craze in the 70s. Craze is a strong word, but you get what I mean. It was just so in to thumb a ride back then. And in truth, you really were taking your chances. Not only could the person be potentially violent, but they might just be a crap driver. See Foxes for a combination of both. It was interesting to watch the girls attempt to size up the driver before they got in the car. Three times out of four they were correct, but that fourth time… watch out. 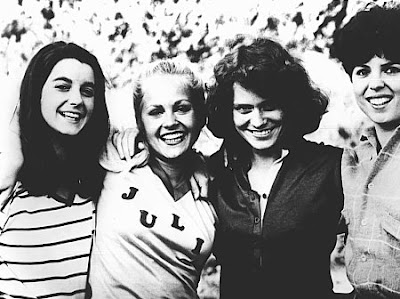 I love, love, LOVE this movie. Fantastically 70s from the tee shirts that say X Rated to Peter Brady going off to find himself. A lot of the dialog is ham-fisted, although delivered with heart, but honestly, I couldn’t wrap my brain around the scene featuring Dana and her Dad, Mr. Fogarty (Richard Sanders… yeah, LES NESMAN! A serious OMG moment for me!). Dana is making her dad a shake and he starts to tell her that he loves her but stops and says “I hope I know you a long time,” and she replies, “I always wondered.” Yeah, if you can explain it to me I owe you a soda. But mostly, the girls just laugh, talk about finding themselves and talk shit about Cathy after she’s raped. You see, they’re like all teenagers. Kind of self-centered and under the mistaken impression they know better. Except Julie of course, who is a burgeoning sculptress dating a much older (and richer) man. Julie will teach you all! But even she isn’t against thumbing a ride, until… well you just watch and find out.

1979 is a golden year for me - I will watch ANYTHING made that year - so this would be on my To See list for that alone - but really it sounds amazing all the way around!

Diary is an amazing little movie - See it! Now! :)

Finishing it up on Youtube now. What a day-- did "Dawn, Portrait of a Teenage Runaway," "Initiation of Sarah" and this one. Good times.

Wow. I remember watching this one back in 1979. Love and miss those ABC Friday Night Movies.