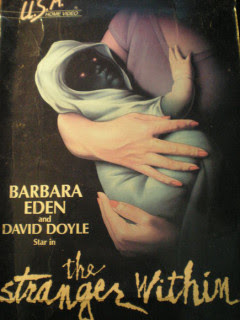 Ann Collins (Barbara Eden in one of her best roles) is an artist who discovers she’s with child even though her husband David (George Grizzard) had a vasectomy. David had the surgery because of a horribly botched pregnancy she had three years earlier. What happens afterwards is truly strange – no doctor can confirm that David’s procedure didn’t take and Ann swears she's been faithful. Then she starts acting bizarrely. She eats salt by the pound, drinks coffee to get drunk and reads entire textbooks in minutes. She takes long walks through the canyons and comes back covered in scratches only to have them disappear in a matter of seconds. She even tries twice to terminate the pregnancy only to have something stop her each time. As her condition advances (she’s only 3 months on but is somehow carrying a 7 month old fetus), things rapidly deteriorate between her and her husband as he unearths the ghastly secret behind the baby. The Stranger Within is excellent. Sparse and claustrophobic with a knockout score by Charles Fox (Women in Chains, Dying Room Only), this movie keeps the viewer on the edge without any special effects or other contrivances normally allotted to supernatural thrillers. But make no mistake, this is no Rosemary’s Baby (another film to make use of suspense organically), even though many viewers seem to liken them. This film lacks that conspiracy angle. It does however prey on the viewer’s fears of everything from unexpected (even unwanted) pregnancies, indifferent doctors, home and personal invasion… the lot. And it does it amazingly well, with lots of thought and a true sense of dread that carries the film from the first frame to the very last.

Barbara Eden should have been one of those actresses, like Elizabeth Montgomery, that was allowed much meatier fare. This could have been Barbara’s Lizzie Borden but somehow wasn’t. It’s too bad too because such beauty and talent all in one is a rare commodity. David Doyle plays the couple’s friend Bob, an amateur hypnotist and he’s great too. In fact, the entire cast (all five of ‘em!) is fantastic in a movie that needs its characters to be consistent and strong. And the script! Adapted from his own story, Richard Matheson creates a taut, minimalist story that plays with the then-current theme of Roe vs. Wade in a fantastic yet thoughtful manner. Lee Phillips directed this film with a lush eye that makes the film feel larger than it is.

The Stranger Within is the kind of movie that made me love made for television films of the 70s.  Excellent filmmaking on a small scale that still delivers a wallop! A must see for anyone who loves this genre.

Sounds sensational! I also really like Barbara's TV movies from the 90s. She's such a likeble heroine.

Omigosh, this sounds (and looks) creepy, but I must admit, your review has piqued my interest!

I have vague memories of this one from that initial airing - but because it was a quiet suspense drama and not a gooey monster movie - I think I drifted away to playing while it was on. Definitely would like to see it again.

Definitely try to catch this one again, Craig. It's really, REALLY amazing.