I’ve got all my favorite nouns covered in Dying Room Only:

Person - Cloris Leachman. This woman  is a truly extraordinary talent, who brought up the bar in just about every production she graced. And on Phyllis her wardrobe was simply to die for.

Place - The Desert. I'll admit, I'm not a fan of the desert in real life. I grew up in one. It's boring, it's hot... oh, and it's boring. But in movies (the really good ones), there's something so undeniably atmospheric about it. In 70s TV movies in particular, the characters practically insisted on wearing layers of clothes with long sleeves. Yikes! What were they thinking?

In Dying Room Only, the uber-stylish Leachman is Jean Mitchell, a woman who wears, like, three layers of tops (OK, it's more like a black shirt with a white safari type jacket, but I swear it felt like three layers!). She’s a mousy wife travelling across the desert (see, two of those nouns knocked out of the ballpark in the first five minutes!) with her hubby, Bob (Dabney Coleman). The couple stops at a remote cafe inhabited by the overly serious proprietor Jim (Ross Martin) and truck driver Tom (the normally affable Ned Beatty). Jean scoots to the bathroom to freshen up her already exquisite style and when she comes out Bob has disappeared. 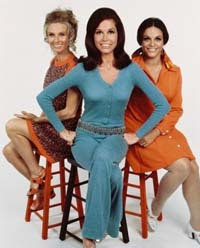 Three of the hottest women of the 70s. Could you just die?
What happens afterwards is about 60 minutes of pure suspense while Cloris looks for her man. I think the film takes place within an approximate 1,000 square foot area and it's extraordinary. Like The Stranger Within, Dying Room Only plays up the claustrophobia and plays down bulky effects (in fact, there are none. Zero. Zilch). In place of large visuals and set-pieces is an amazing cast that uniformly brings in brilliant performances. Everyone is in top form here, from Leachman to Martin to Beatty to Dana Elcar as the Sheriff. Dabney has the least amount of screen time but is good as the missing (and forever aggravated) husband.

Written by the always reliable Richard Matheson (who coincidentally also wrote The Stranger Within), what struck me most about Dying Room was the growth of Leachman's character. She's played out here in a realistic manner and goes from weak to loony to strong without missing a note. The situation calls for that, and unlike some "final girls" who seem to go from useless to bold in one stroke of the writer's typewriter, Leachman's dissent becomes her strength, but not without a few freak-outs along the way! I love the part where she loses it and starts hitting Beatty. I admit, by that point, I’d be slapping someone around too!

There’s also a grand sense of xenophobia, although that doesn’t really come into play in the actual story, but Leachman is treated in such a way that she may well just be a suspicious interloper. How those two guys continue to make Leachman look guilty of something is amazing!

So we’ve got our person, place and thing all in place… what about the ending? Well, that might be the movie’s only weakness. Still, even without a big ol’ huge payoff, this movie is the kind that lingers in the mind well after you’ve seen it. Another point for Matheson in an already extraordinary career. 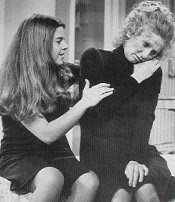 Poor Bess didn't stand a chance!
Posted by Amanda By Night at 10:26 PM

Sounds great! Never heard of it, but I will have to seek this one out.

One of my Top Ten. Baffling and maddening, a and as you pointed out - perfectly played. A good movie.