The Power of the Stream...

I'm sure it's just me living in my lovely little made for television fantasy world, but watching TV movies online reminds me a bit of the good old days when you had your little set placed somewhere on your kitchen counter. You know the days when you sat on that rickety ol' stool watching your tiny TV. Now if only I could get it to stream in black and white!

In other words, there's something kind of retro about watching your retro television online. And I'm loving it! Screw this whole HD thing, which really just makes all these great old movies look bad anyway. Watch 'em they way the internet gods intended!

A little while ago I found some great TV movies streaming online. I have a few more to add to the list:


The Must See Streaming TV Movie: 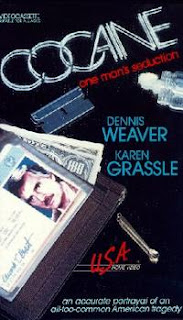 Cocaine: One Man's Seduction: Fancast is streaming this awesome cult drama about a mid-40s real estate agent (Dennis Weaver) who shucks it all away when he finds a taste for snow. A totally un-hip take on how anyone can get hooked on the stuff, this is fairly well made film that might not push the envelope but certainly makes a good case that anyone, and I mean anyone can ruin their life with just one toot. And check out Pamela Belwood in a great turn as a casual cokehead.

Absolute Strangers: According to IMDb, this movie is about "a husband tries to keep his comatose wife alive by allowing doctors to terminate her pregnancy. Hearing about this, anti-abortion protesters start a legal campaign to gain legal custody of the fetus." This stars Henry Winkler and Patty Duke and was nominated for a Primetime Emmy (Outstanding Director). Wow, glad I stumbled across this one!

The Ambush Murders: According to the Ny Times this movie which is "traces the case of an outspoken black activist accused of murdering two white policemen in Lindero, Calif." Hmmm, maybe a little too dramatic for me, but it does have machismo-on-a-stick James Brolin!

Deep Dark Secrets (aka Intimate Betrayal): Yet another James Brolin TVM, according to IMDb this one gets all crazy when "a woman finds hidden truths when her husband disappears and is presumed dead." Ah, Lifetime before Lifetime. I'm loving it!

Secret Lives of Second Wives: Total drama action, this is a 2008 TVM about a woman who "finds that marriage the second time around is far from idyllic when the ex wife and her children return to manipulate her husband Jack." OK, this was made for Lifetime, but I love that stuff too! So what of it?

Tip: Go to the last few pages to find the juicy older made for television movies.

Baby Sister: Phoebe Cates is the object of affection for her older sister's boyfriend. The sister is played by Pamela Bellwood (again!) and the mancub in question is played by the uber-hawt Ted Wass. Made in 1983, this is a fun, if slightly misleading, romantic drama about a lost little girl in cut-off shorts. It was totally good. Go watch it now! Now, why would I need cocaine when I've got made for TV movies?!?
Posted by Amanda By Night at 10:55 PM

Email ThisBlogThis!Share to TwitterShare to FacebookShare to Pinterest
Labels: drama, links, other