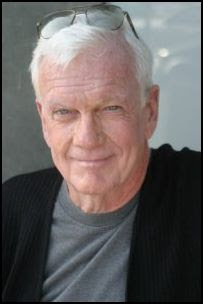 I think I first came to know Peter Haskell through the creepy made for TV movie Phantom of Hollywood, but it was his starring role in The Eyes of Charles Sand that struck a cord with me. Peter was perfectly cast as the befuddled bachelor (with a killer pad) who inherited some nifty and scary psychic powers. It’s one of those TV movies (also a pilot that never made it to series) that made me love TV movies. Bare bones, but thick with atmosphere, I fell in love with not only the movie but I also found myself smitten by Peter. He’s exactly the kind of actor I gravitate towards, with his under the radar persona. 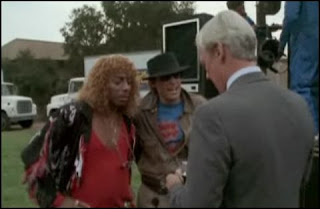 Yes, that's Peter on the A-Team with Murdock and Rick James!!!

Peter died unexpectedly yesterday. I didn’t know him personally, but I got a chance to actually correspond with this wonderful actor via Facebook. Here’s a snippet of what he shared regarding appearing in the made for TV movie Love Hate Love:

Fun show to do. I knew Ryan [O'Neal] really well, Lee Majors and I used to hang with him. My dad died while we shooting the picture and Ryan and Leslie [Ann Warren] were hugely supportive. The director, George McCowan, had the entire company referring to us as the Star, the Girl and the Actor by the end of the first week. If the scene was between Leslie and me, the call would go out for "the Girl and the Actor are needed on the set."

Peter’s work in the made for television genre is something to behold. Here’s a list of the films he did in the 70s: 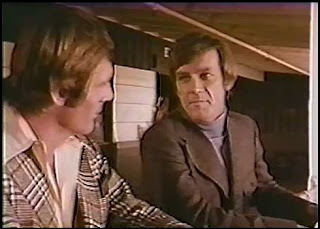 Peter and Adam West in the Eyes of Charles Sand

In the 80s and beyond, he mostly worked in episodic television and I think that suited him fine. I loved seeing him now and again on all my favorite shows, such as Fantasy Island, Frasier, Hart to Hart and well, the list is endless.

Here’s a review I wrote for a Lifetime movie he made called Sex & Lies in Sin City. It was one of his last appearances on television. He had a small but interesting part in this true crime story.

Very few of us get a chance to actually meet/correspond with the actors we admire, but Peter was up to the task of making his fans feel very welcome into his life, if only through the internet. I will forever be grateful for those few moments he took to share a couple of memories with a goofy television nut. Peter, my heart goes out to your family and friends right now. I know they lost a one of a kind man, the likes of which I am sure we are not to see again. And thank you for your time and for just being incredible.

I had made up this stupid word, "hineyshines," a couple of weeks ago - it just came to me - and he asked if he could take it to his actor's group to use as the starting point for an improv. I hope he did and I hope they all got a big kick out of it. Good bye, Pete. We'll always have hineyshines.

Wow, another actor gone. :( Isn't it just amazing how all these actors we've come to love from the 60's to 80's generation are passing away in the last few months? Very nice memorial blog. I haven't blogged in a while or checked any so I will be reading through more of yours soon. Always something interesting!

Richard, I so remember the hineyshines post. Makes me sad. I'm so glad he honored us by letting us interact with him on FB.

And thanks you two for stopping by!

What a great post on one of the coolest actors of all times. My main man is Dean Martin, but I have watched everything that I could with Peter Haskell. Loved Bracken's World" and "Eyes Of Charles Sand." btw, just discovered that "The Eyes Of Charles Sand" has been posted at youtube. Thanks for honorin' Peter Haskell with this stellar post.

Hi dino! Thanks for commenting. I love Peter. He's the guy who makes all productions that much better simply because he's there.

I want a good DVD copy of Charles Sand so I can review it with stills. I might have to watch it on YouTube as most of my movies are in storage right now!

This was lovely and I enjoyed reading the comments about my pops. Thanks, all.

Not sure you'll see this, but if I could go ahead and extend my sympathies again. I really enjoyed your father's work and, of course, those brief moments we corresponded on DVD. I am sure your father was like no other. As someone who lost their own incredible father almost 5 years ago, I can only wish the best and tell you I'm thinking about you.