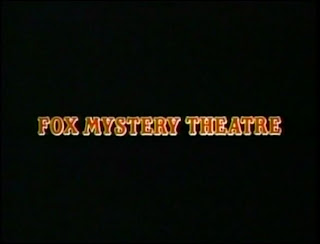 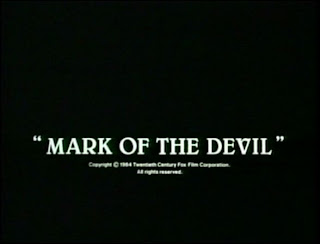 Network: ITV
Original Air Date: September 5th, 1984
When I popped Mark of the Devil into my DVD player the other day I had no idea what I was getting into. My copy is called Fox Mystery Theater: Mark of the Devil, so I imagined it was a made for TV homage to the gooey cult classic of the same name starring Udo Kier. What I got was actually an episode of Hammer’s House of Mystery and Suspense, the last bastion of horror hounds' favorite British movie studio (the series was co-produced by 20th Century Fox, hence the Americanized moniker). There are thirteen episodes in this short lived UK series and Mark of the Devil ended up being my initiation into the show. I was then knocked over again when I saw it starred Dirk Benedict (the hottest Battlestar Galactica), was directed by Val Guest (Quatermass Xperiment, Toomorrow) and written by Brian Clemens, who penned every episode of the awesome 70s Brit classic Thriller. Wow, that’s kind of everything I ever wanted in a movie. But did I set my sights too far? Don’t you love suspense? 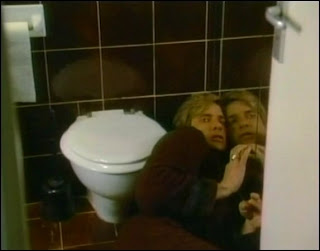 Dirk Benedict is Frank Rowlett, a lowlife gambler who woos a rich and beautiful girl (Jenny Seagrove). He’s preparing to marry her and enter the world of the wealthy elite, but his gambling addiction keeps bringing him back to the underground casinos. Through some bad decision making, he ends up at a tattoo parlor trying to snake some dough and ends up killing the owner… but not before he’s stabbed once with a tattoo needle. Unfortunately, this tattoo artist is also a big voodoo freak and his needle essentially possesses Frank’s skin. At first it’s just a puncture wound, but the lesion soon becomes a tattoo that grows like wildfire across Frank’s body. This leads to even more poor choices as Frank desperately tries everything he can to rid himself of the curse (except turning himself in, of course).

Mark of the Devil is odd. I can’t imagine anyone in the US would ever have the cajones to produce such an obtuse movie. It’s simple, but wild in its ideas. Leave it up to Clemens to find a way to make it feel believable. Frank is definitely a loser, but his comeuppance feels a little unwarranted (or at least slightly over the top!), so there’s some feeling of sympathy for him. And of course, I’ve always found Dirk to be one of those great looking actors who actually possessed talent. I was so blown away by him in Sssssss and think he never really gets the notice he deserves (although he might now that he's playing Columbo!). He’s great here and the movie as a whole is a lot of crazy fun. 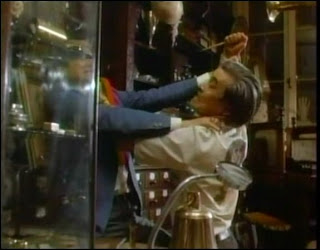 For those of you unfamiliar with the director, Val Guest, please try to find a copy of his movie Toomorrow, which got a small theatrical release in 1970, but has not seen the light of day since, except for a few revival screenings. It’s about rock band (led by Olivia Newton John) who are so good, aliens abduct them so they can save their species. No. Joke. And it’s incredible. I had the honor of seeing Guest speak and then later I got a chance to talk to him briefly on the phone. He was one incredible man, totally vital into his 90s. He died in 2006 at the age of 95. He’s another under the radar guy, and is well worth discovering. This episode of Hammer’s House of Mystery of Suspense is a great introduction. 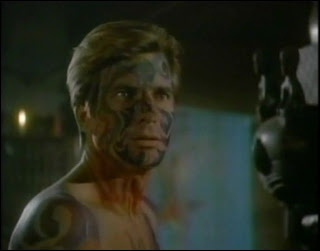 Still smoking hot. How do you do it, Dirk?

Unsurprisingly most episodes of this starred Americans - Peter Graves (RIP), Deborah Raffin, Barbi Benton (?!?), Cristina Raines et al. And you might want to track down "The Woman Hunter" from 1972 if you haven't already, also penned by Brian Clemens (and fellow British TV veteran Tony Williamson, from a story by Clemens), starring Barbara Eden and Robert Vaughn (made, despite the involvement of Clemens and Williamson, by Bing Crosby Productions).

Hi Cindy Lover! Thanks for commenting. I feel like somewhere deep down in the recesses of my burnt out brain I knew Brian Clemens was associated with The Woman Hunter... I think. But had obviously forgotten. I have a copy, I think it was in one of those cheap 50 packs. I must see this soon! Thanks for reminding me!

If it's in the public domain - and I think it is; that movie turned up on one of the more ragged cable channels here a while back (a now-defunct one which also showed "A Tattered Web" with Lloyd Bridges) and you can find it on LikeTelevision.com, sans the BCP logo at the end alas - I bet it's in one of those cheap 50 packs.