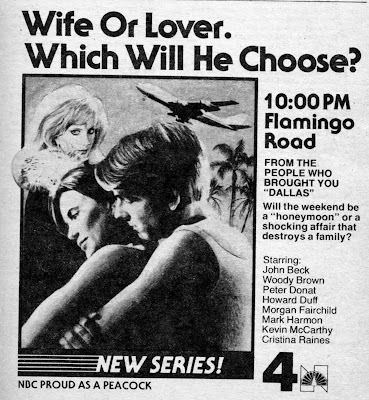 If you haven't noticed, I've been in the mood for love lately.

While I almost always enjoy a scary TV movie, I also like it when my small screen treats are soapy and sudsy and full of over the top romance. The 80s was the perfect coming of age era for me because so many day and night time shows brought on the melodrama but good!

Although I missed it in its initial run, I remembered Flamingo Road well. I am from Las Vegas and we had our own Flamingo Road (next to the Flamingo Casino as you might have guessed), and for years I assumed that was where the show took place. Silly me! Apparently there are a gazillion roads with the same name, and this series, which debuted on May 12th, 1980 on NBC actually took place in Florida (although it was shot in Sam Dimas, CA). The road symbolized the right and wrong side of the tracks, and characters from both sides intertwined in tales of heat, lust and revenge! 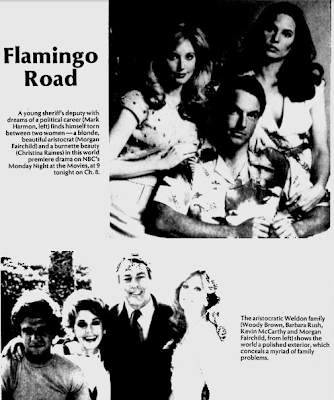 Inspired by the 1949 film with the same name (and starring Joan Crawford), Flamingo Road was intended to be NBC's answer to Dallas or even Falcon Crest, but did not do so well in the ratings. At then end of it's second, and final, season Neilsen listed it as the 68th most popular series of the year, out of 105. Despite it's middling ratings, Flamingo Road tried to find a niche for itself on daytime, but the move never materialized and the series ended on a cliffhanger.

Flamingo Road had an amazing cast, including Cristina Raines, Mark Harmon and Morgan Fairchild who said her character was a "real bitch" (as if we'd assume anything else). The promo below also shows a studly John Beck, who would go on to play Mark Grayson on Dallas. Other wonderful faces included Kevin McCarthy, Howard Duff and Woody Brown. This series seriously needs a DVD release!

I had a bit of a girlcrush on Morgan Fairchild back in the day, I really wanted to be a bitch like she was on the show. I bought her beauty book and everything. Still have it.

I STILL have a girlcrush on Morgan! Today was her 63 birthday, btw! She looks fantastic!

Oh man, I'd love to see that beauty book. I have The Eyes Have It vhs tape by Donna Mills!