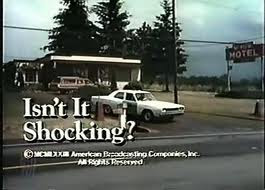 Before John Badham became the iconic director behind Saturday Night Fever (1977) and War Games (1982), he cut his teeth on the small screen. Badham worked mostly in episodic television and Isn’t it Shocking? was released in 1973 and was his second foray into the world of tele-films (his first TVM No Place to Run aired the year before). Shocking was broadcast on October 2nd under the popular ABC Movie of the Week moniker and, according to Michael Carol’s excellent and aptly titled book, The ABC Movie the Week Companion, it is considered to be one of the first horror-comedy hybrids (although I might argue that the hybrid dates back at least to the 1927 film The Cat and the Canary). Even without that tidbit, Shocking stands for an interesting time in the tele-film as it began to grow in popularity, enticing bigger named, respectable stars and genre-friendly stories. 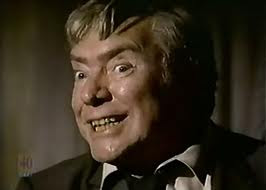 Case in point, Alan Alda, who was then America’s Sweetheart on M*A*S*H (or at least a neo-Groucho Marx) plays Dan Barnes, the bored and somewhat unproductive sheriff of a little idyllic community called Mount Angel. His odd secretary Blanche (Louise Lasser from Mary Hartman, Mary Hartman fame) keeps his days interesting, but he’s looking for more exciting pastures over the hill in Horse Creek. Dan wants a younger crowd, the folks at Mount Angel are mostly elderly, and he feels stagnated in a town that is just moving too slow. However, the pace picks up quickly when a madman starts killing off several of the over-sixty crowd. 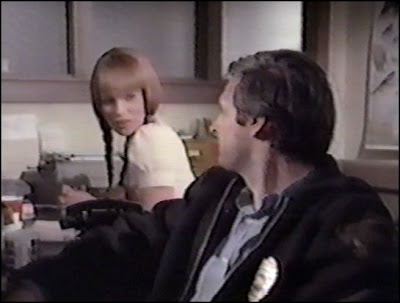 Shocking is shocking simply because of the dark subject matter. Considering the brutal deaths (well, brutal by television standards) and revenge motif, in some ways the film meets the criteria of a proto-slasher, which are films that predated the 80s slasher craze but still embody many of the same components. It also plays on other slasher tropes with the set-pieces and excellent music score by David Shore, who heightens the tension with creepy strings thrusting through the airwaves. And it’s got an incredibly inventive piece of weaponry – the killer uses a heart attack machine! Basically a primitive defibrillator, the killer literally shocks his victims to death. But there’s one thing that slashers – and most horror films in general – have shied away from and that is focusing on the death of elderly characters. While there are no overt shots of violence, the murder scenes are intense merely because of who the victims are. 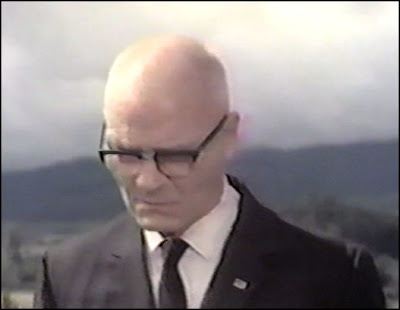 We are given very little information about most of the victims, but Jessie (Lloyd Nolan in a terrific role) who is one of Dan’s co-workers also falls to the murderer’s incredible killing machine. He has just enough screen time to allow his character to embody a sense of humor and vulnerability which amplifies the tragedy of the rest of the murders. His death is particularly gripping because you get a real sense of the father-son relationship he had with Dan. Unlike the victims of slasher films who tend to feel like caricatures, we understand the murder victims in Shocking have sons, daughters, husbands and wives. 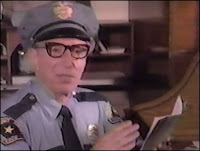 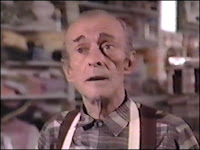 The old timers in Mount Angel are also shown as vibrant and vital members of their community. In a montage we see the town is brimming with busy merchants and farmers. Even the crazy cat lady (played by the wonderful Ruth Gordon from Harold and Maude) is doing chores (in fact, I think she’s churning butter)! In a world where so much weight is placed on superficial beauty, Shocking is a time capsule of when real people populated films, and it is refreshing. And if we’re going to stick with slasher tropes, Ruth Gordon must be the oldest Final Girl in horror film history! 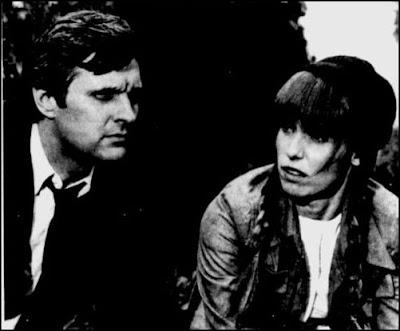 Filmed around Salem, Oregon, Shocking has a lot going for it. Aside from the scares and laughs, there is an amazing edge-of-your-seat car chase that ends with the killer decimating Dan’s police vehicle! Television movies never really got their just dues for camera work, and admittedly many films are static, thanks to low budgets and shortened shooting schedules. Cinematographer Jack Woolf does a fine job capturing the more tense moments, but he works best by just letting the actors interact with each other. Shocking is about the characters and there are several medium shots featuring two actors which is often framed with one person closer to the camera and the other a few steps back, sometimes obscured by shadows, allowing for more focus on the emotions. Also, the shadowing becomes symbolic of a dark town secret. 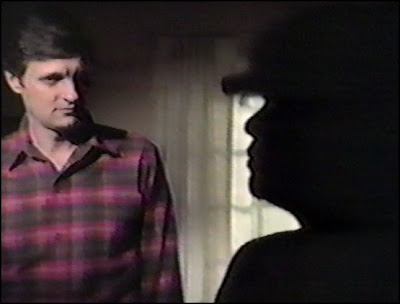 Alan Alda was perfectly cast. He proved his ability to mix comedy and drama on M*A*S*H and while he is more befuddled and less prone to snarky one liners, Alda captures a real sense of frustration, often comical and sometimes tragic, in his performance. While Louise Lasser never became a household name, she was a familiar presence in film and television and this is one of her best roles. She’s infuriating with her oddball sense of humor and style, yet uniquely adorable in those Mary Hartman braids! Together, Alda and Lasser have chemistry to spare, and the scene which solidifies their attraction for each other is saved for the hysterical last moments, as the credits roll, making a nice break from the bleak murders. 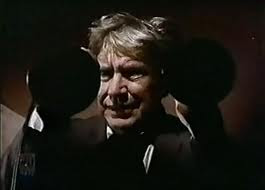 Screenwriter Lane Smith wisely separates the humor from the violence and manages to imbue an eccentric ambiance throughout the town. This was Smith’s television debut (his first film, a theatrical, was the interesting but flat 1972 James Garner mystery They Only Kill Their Masters) and he would later adopt a more serious approach, penning far less humorous small screen thrillers throughout his career (including the excellent Strange and Deadly Occurrence, which also twists an ideal life in the country into something terrifying). By today’s standards, Shocking probably seems earnest and tame, perhaps even a bit timid, but that was the struggle of television when they first made their foray into motion pictures. Badham concentrates on the characters but he doesn’t build his thrills traditionally. For a horror film on television, he doesn’t pull any punches with his subject matter and while he opts for less-is-more with the visuals I can’t imagine handling this type of film any other way. 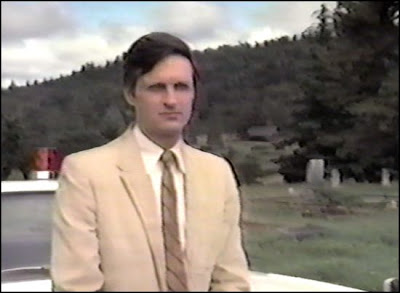 I’ve seen Shocking a few times and always love it a little more with each viewing. Aside from its original airing and a few re-runs, this movie has all but disappeared from the minds of television viewers. It’s interesting that such a high caliber actor like Alda could have a film this obscure, but it symbolizes the eternal purgatory most TV movies find themselves in. Every time I watch it, I am drawn to the characters and the budding romance between Dan and Blanche. I pity and fear the killer and I wish I could back to the day after this movie aired in 1973 so I could find the nearest water cooler and discuss this wonderful little gem of a film.

I've written about Shocking before when I made a list of the Top 10 TV Movies that Need a DVD Release. This was my #1 pick, so get on it Hollywood!

You can read another great review of Shocking at The Classic Film and TV Cafe.

This review originally appeared on Retro Slashers (well, truthfully, it actually first appeared on a school paper, but RS was the first to publish it).

The 70's did seem to be a good time for honest and heartfelt characterization. Steven Speilberg's films, Woody Allen's films, and Harlod and Maude all had that matter of fact 'this is just how people are' kind of dialogue and moments. All of this was forgotten by the 80's lol....except for films written by John Hughes.

I totally agree, the 70s was all about characters, and those natural moments you don't seem to see as much anymore. I also agree about John Hughes! :)

this film was filmed in Mt Angel Or, my grand parents ran the theatre across from city hall. they paid me to cange the marque every day that they were filming. 20 some minites into the film ,it shows the front of the theatre with edmond o'brien eating one of his candy bars. I came down the ladder and walked off camera. my one brush with fame.it was fun .

That's so cool that you are in the movie! I'll keep an eye out for you next time I watch it!

do you know where the motel was at ?? i've seen it but can not remember where. i have bought a copy from a shop in saskat canada , called Roberts video . it is a fair copy . it was nice to see it again . look around 20 min into the show.in most books i have found , it is not listed. very strange. thank you for your kind comments.
dennis mcgill

Which hotel? Do you mean the one at the beginning of the movie? I'm not sure where anything is located, unfortunately.

Shocking is definitely a film that needs a bigger audience!

A small point, but Dan Barnes is not the sheriff of the county which includes Mt. Angel, but rather the Town of Mt. Angel's police chief. In fact, a minor plot point in the story-line is that the sheriff's job has suddenly vacant, and Dan is a candidate for the position. If you want to think of it in terms of the Old West, Dan's job is more akin to the Town Marshal.

Not all rural or small-town cops are sheriffs, and nor are all sheriffs are rural. The Los Angeles County Sheriff's Office , for example, with more than five thousand officers, is one of the largest law enforcement agencies in the country.

Another point of interest. The script writer, Lane Slate, won an Edgar from the Mystery Writers of America in the categor of Best Mystery Teleplay (Special), "Special" being an encompassing euphemism for made-for-TV movies, drama specials, serialized mini-series, etc. There was a separate category for episodes of regular series.