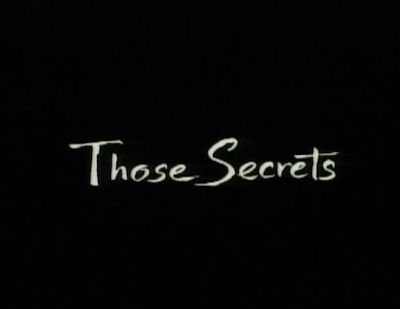 OK, maybe I’ve been taking too many critical theory classes, but I think the bizarre and fascinating TVM Those Secrets may be the first post-structuralist small screen film I’ve seen. Or, maybe I was just more attune to it since I’m knee deep in cultural theory as I write my final senior paper. Or, maybe I don't understand it at all but think I do (school does that sometimes too!). At any rate, damn. Those Secrets does a fantastic job of decentering the audience with narrative slippage. The result was that the film is, at points, both an alluring failure and a disturbed success.

I decided to stream Those Secrets on a whim, and because a good friend of mine thought I’d enjoy it. The Netflix synopsis is so misleading:

“Neille Banesh (Blair Brown) put her call-girl days behind her to become a wife and mom, but boredom with her humdrum life -- coupled with the revelation that her husband, Simon (Arliss Howard), is cheating on her -- sends the incensed homemaker back on the path of prostitution. In this story of self-discovery, the escort reconnects with Leonard (Paul Guilfoyle) and other clients in between sessions with her therapist (Mary Anne McGarry).”

OK, OK, the first half of that summary is accurate, but the second half simply does not account for all the weirdness that unfolds as Neille is hurled through a whirlwind of despair. Granted, it’s a slow moving whirlwind, but you get my point.

There are so many weird gaps in the story. For instance, Simon is not the father of Neille’s two daughters (one of whom is humorously named Molly recalling Brown's then-recently cancelled series The Days and Nights of Molly Dodd), and it’s never made clear who their father is or where he is. When Neille receives a visit from a prostitute friend, the timeline of her call-girling days becomes fuzzy, and may even suggest she was giving trips around the world after the birth of her children. And do prostitutes really sell their little black book? I dunno.

There are dramatic pauses delivered between lines, and overall Those Secrets has a very dream-like vibe. In one surreal scene Molly (Ellen Blain) confesses to Neille that she’s sad she’s no longer a little girl because she does not feel safe anymore. In that instance, it would seem Neille is having a conversation with her younger self. By the way, this is also the moment I decided to throw out the idea that I'd get anywhere working with a traditional narrative, so I began to follow the film as if it were a series of wildly strange vignettes about a women who lost control of her life by trying to control men with sex. Once I did that, Those Secrets became a beguiling little drama. Too bad only half of the film was left!

But letting go of things like, oh, the story helped immensely because when they get to the scene where Neille may or may not have sex with an elderly couple who are interested in S&M, I needed to be just as disconnected as she was! While this tryst ends before it becomes too disturbing, what we do see of Neille’s sexual encounters is cool, detached, and lonely. As a protagonist, it’s really hard to feel for her because she’s as closed off as a character as she is as a paid sex partner. Her friend Faye (Mare Winningham) is then saddled as the hooker with a heart of gold, and she’s fantastic. I sort of wished this film had been about her.

Those Secrets aired the same night as the wonderful Doing Time on Maple Drive, and many newspaper critics reviewed the films together. As you may have guessed, they loved Maple Drive and hated Secrets. However, People Magazine wrote this:

“It's an unsettling film, daring in its kinkiness and in its scattered but sophisticated visual and narrative style. Brown and Howard distinguish themselves and are buoyed by a cast that includes Paul Guilfoyle, Louis Gimbalvo and Mare Winningham.”

People was right. Those Secrets is an oddball but fascinating flick. Cinematographer Paul Murphy creates a gorgeously aloof universe where, as Molly might say, no one is safe. First time director David Manson was already a successful producer and his TVM Night Cries was a lot more linear, but it also dabbled in dreamlike scenarios as well. As I wrote earlier, Those Secrets doesn’t really kick in until the halfway point, and boy, does it have a frustrating ending, but overall it is an interesting example on how to throw off the viewer by dissolving the traditional way of storytelling into a visual and emotional sense of isolation. It's not quite Lynch on Lifetime, but if you like your pre-Lifetime Lifetime movies a little more twisted than usual, this might fit the bill.