Scream Factory Getting Into TV Terrors! 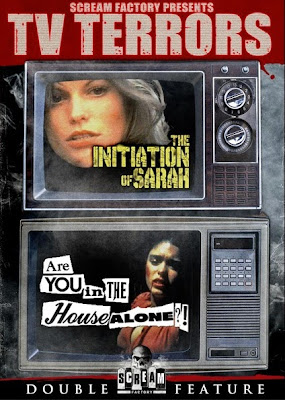 I was ridiculously excited when I saw the news yesterday that Scream Factory is releasing The Initiation of Sarah and Are You in the House Alone on a DVD two pack!

This is some kind of awesome double feature, and just in time for Christmas! I'll just re-post what they said on the facebook page, and I expect to see everyone with a copy by the end of the year!

From Scream Factory: Scream Factory "TV TERRORS" are coming to your tube soon! Two made-for-TV horror films (both from 1978) will be coming to DVD for the first time at a low-price on 12/10.

As we mentioned earlier when we announced this release at Comic Con, made-for-TV films typically have had a history of not selling well (aside from some notable exceptions out there that have huge fan bases) so we are testing the waters here to see what happens. If this performs well, we would love to tap into some other great televised favorites and bring to you a "Volume 2" in the future.

That is awesome news!

I have long been a fan of made for TV horror movies, so this is music to my ears.

Wow, a two-Morgan movie. Initiation of Sarah has to be good!

I remember seeing Are You In the House Alone? by Richard Peck in the "young adult" section of the bookstore when I was growing up. I was always too chicken to read it. Maybe as an adult I can handle the movie.