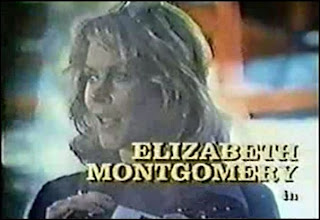 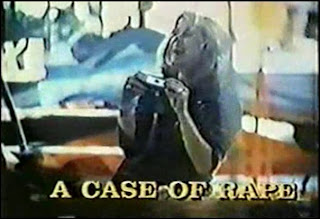 As much as I love my TV movies for all its Nehru awesomeness, it would be remiss of me to not add that in many ways it was a tough go. Movies like A Gun in the House (1981) and A Case of Rape aptly captures the fear all women carry with them. It's easy to forget in these days and times, with more victim friendly rights and less stigmas attached to them, that a woman could possibly be accused of being the instigator in a rape. But people have carried that notion with them for centuries. I mean, she must have enticed him, right? She’s pretty and she had a drink at a bar… You know the drill. A Case of Rape throws all of those ignorant concepts in the viewer’s face and shows what a farce the court system can truly be. 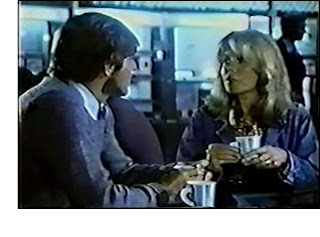 Elizabeth Montgomery is Ellen Harrod, a ridiculously happy woman with an incredible husband (Ronny Cox as David) and a small girl. David is a traveling salesman and Ellen whittles away the lonely hours with such things as art classes and PTA. After class she and her friend Marge (Patricia Smith) meet a young man named Larry (Cliff Potts) who offers them a ride home. Larry asks to use Ellen’s phone and proceeds to brutalize and rape her (all thankfully done off screen). Ellen is embarrassed and decides to just live with the secret, but just a few days later, Larry returns and rapes her again (this time in front of a neighbor!). After a harrowing day at the hospital and with the police, all of whom refer to her as the “Rape Case” instead of using her name, the real crime begins. Ellen’s life is slowly ripped apart as she’s constantly held up to scrutiny and judgment. At one point, Marge even suggests that being raped must be an exciting sexual adventure. That to me was the defining moment of this film. 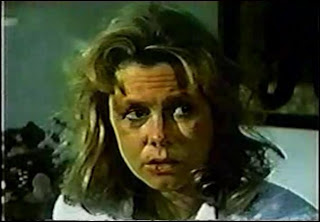 Her one bright light is Leonard Alexander (William Daniels), a lawyer who actually understands the true horror of Ellen’s situation. At the same time, he’s no knight in shining armor, essentially leaving Ellen alone.

With so many television movies dealing with crimes against woman (Lifetime, I’m looking at you), it’s easy to see something like A Case of Rape as pure television for women fodder, but at the time it broke boundaries we now no longer have to endure. With a few exceptions, it seems the whole world is against Ellen, or at least they simply don’t understand and don’t want to. Every action she ever took with a man is held under a microscope (including accepting a car ride home from her neighbor) and twisted to look like Ellen is just some random trampy housewife enjoying the swinging 70s. Elizabeth Montgomery is amazing here. She is completely dignified but at the same time broken into a million pieces. Ronny Cox is wonderful as her ineffective hubby who only wants to see things go back to normal, but can they ever? 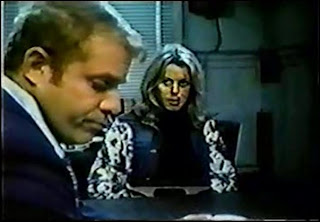 I don’t know why I chose this film to watch. I mean, just looking at the title you can see this isn’t going to be a jump into escapism, but I’m glad I did see it. It’s important to remember how far we’ve come, and what happened to those before us who were horribly affected by a group of small minded lawmakers.

Both director Boris Sagal and Liz were nominated for Emmies. Liz lost out to Cicely Tyson for her role in The Autobiography of Miss Jane Pittman. Liz was nominated nine times for an Emmy and didn't win a single one. It's a damn shame too. She put in so many amazing performances on television. At least give the lady a lifetime achievement award, please!

I love your cultural commentary! You're right--victim's rights advocacy has come along way since the 1970s, thanks in part to a more informed public. And, made-for-TV movies that boldly dramatize the nightmare that women often undergo within the legal system. Montgomery made risky, bold decisions with the roles she took after her success with 'Bewitched.' She's amazing.

I remember when this movie was first broadcast--the commercial had Montgomery, angry in court on the witness stand, proclaiming she was raped. It was VERY provocative.

Oh wow, I'd love to see the ad for this movie. At the time there were a few of these movies. Very bold, and in many ways, life changing.

This would be interesting to watch as a double feature with "Are You in the House Alone?"

i enjoied watching the movie and her acting was memorable. you can watch a the movie youtube.com