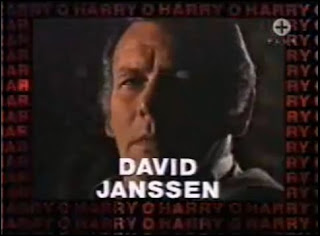 David Janssen was a certified genius. He had an IQ of 160 and read about six books a week.

Born with the name David Harold Meyer, his beauty queen mother later married Eugene Janssen, which is how David got his name. By the time he was in his mid 20s, he'd already racked up dozens of credits in film and television, but it was his portrayal of Dr. Richard Kimble in the 60s television series The Fugitive that made him a star. 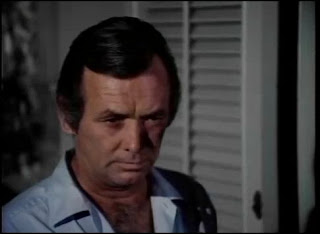 Most actors would consider themselves lucky to have one hit show, but David starred in two, the other being the 70s cop show Harry-O. The pilot to the series was called Smile Jenny, You're Dead (1974), and featured the likes of Jodie Foster, Clu Gulager, Andrea Marcovicci and Zalman King! I love them all! Although I don't remember much about the series now, when I was a wee Amanda By Night, this and The Streets of San Francisco were my favorite shows. I know, I was a serious kid!

It was also during this decade that the now iconic actor was making a bevvy of television movies, mostly suspense. His gruff, darkly handsome features allowed him to appear in everything from thrillers to westerns.

One of his most popular tele-pics was the Longest Night (1971), which is a tense thriller about a wealthy girl buried somewhere in a coffin as the cops race against time in an attempt to save her. Shortly afterwards David starred in Moon of the Wolf (1972) which was about (surprise, surprise) a werewolf, and also featured another handsome TV stud, Bradford Dillman.

David racked up several television movie credits before his untimely death in 1981, at the age of 49 when he suffered a fatal heart attack in his Malibu home. 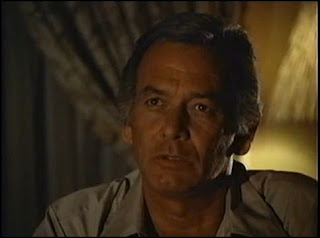 Here is a list of some of his television movies (the linked titles are available online):


Don't forget to check out his official website, The David Janssen Archive. It's pretty cool. Poke around…

And you can read about the actor's darker side (and his affair with Angie Dickinson!) at People Magazine Archives 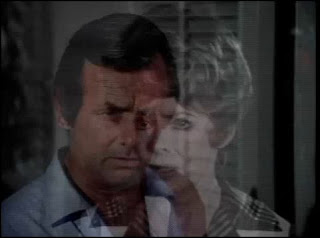 If David ever had to morph into Barbara Rush, this is what it would look like!
*Portions of this were originally written for my TV movie Yahoo group.
Posted by Amanda By Night at 1:45 PM

The amount of time Janssen spends shirtless in "Moon of the Wolf" is truly remarkable.

That's a very well written tribute to an actor I will admit I knew very little about (other than recognizing his name from The Fugitive.) How sad that he died so young.

Not to take away from your post, but ss an aside, the guy in the hairspray commercial with the sideburns and longish hair is cute (betcha you knew I was going to point that out!)

Wow, The Streets of San Francisco? Let me guess - it was a young and handsome Michael Douglas that kept you watching every week, right? :)

Somehow, I remember that when Rona Barrett announced his death during her entertainment news segment on "GOOD MORNING AMERICA," she detailed the fact that his heart attack occurred while going to the kitchen in the middle of the night, reaching to a high shelf for cookies; "Janssen was known for having a sweet tooth."

I don't know if she was being humanizing or flippant, but I felt sad as a kid not only that an actor I watched on TV every week was dead, but that all he was after was just a cookie when he went down.

Marc, it's interesting that you remember that because in the People Archive link there is an interview with Janssen's widow talking about how she thought she heard him choking on a cookie and didn't realize that he was having a heart attack. 49 is SO young, I'm sure it wasn't even on her mind.

Pam, I had to go rewatch the ad, that guy was cute! That's so funny that you noticed! You do like your retro studs!

Do you know what's funny, although I love Michael in Streets, I've never really had a crush on him. If anything, I was drawn to it because of Karl Malden. I always loved genial looking grandpa types. My love of Harold Gould knows no bounds! :)

Propagatrix, I haven't seen Moon in forever. I'll have to check out Janssen's shirtless bod soon! Actually, I think because he lived on the beach in Harry-O, I probably saw a lot of him and just don't remember...

But Janssen keeps you rooting for the good guy.

This is thankfully on DVD in the US.

Hi Mark! I was going to link to buying a copy of Birds, but both Amazon and Half.com don't have any copies! I KNEW I should have picked it up when it first came out... If you know of another good source to get it, let me know and I'll add a link! Me want now!

HIMark,I have loved David Janssen ever since the first time that Isaw him at the movies in 1961 in RING OF FIRE. Iwas driving down the highway when I heard his death announced over the radio. Iwas crying so hard that I had to pull over to the side of the road. Ihave tried for years to find the movie RING OF FIRE, plus THE GOLDEN GATE MURDERS, and COVERT ACTION. If you or your readers know where I can purchass them , please e-mail me at lmdrown@gmail.com. Thank you very much. The world lost a truly great actor, but he will never be forgotten. Sincerly, Lucille

The greatest tv show of all time is The Fugitive. Nobody could play Dr. Kimble better than David Janssen.