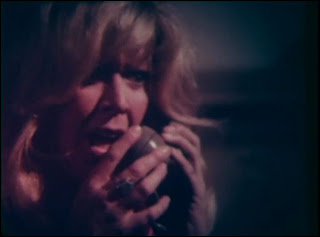 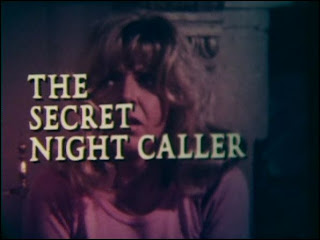 Doctor, I begin to think that we all may be mad. What for instance are they all thinking, all those people alone in all those cars? What fantasies are being lived? What crimes are being dreamed of? Are they like mine?

Thus begins the journey of Freddy Durant (Robert Reed), uptight IRS guy by day, obscene phone caller by night. Freddy is disconnected (ha!) from the world, the only things he shows any emotion towards are his daughter Jan (Robin Mattson) and plants – and not necessarily in that order. His overbearing wife Pat (Hope Lange) plays the doting wife role, but prefers to run the show, not leaving much room for Jan or Freddy to interact in any normal manner. Freddy escapes his domicile doldrums by creating fantasies, such as making love to a woman he’s never spoken to – in her convertible! He also frequents strip clubs and makes nasty phone calls. We never hear the content of those calls, but they are so obscene they send a woman into a panicked frenzy fleeing her apartment and she crashes her car, almost killing herself! And that's his coworker! Freddy is wracked with guilt and his life goes into a total tailspin when a stripper recognizes his voice and blackmails him! At one point, she pushes him so far he begins to strangle her. When he relents she quips, “You’re the real thing, man!” I have to agree. Eventually his house of cards comes crashing down, but not before it destroys almost everything from his job to his home life. Wow, Freddy, you are so naughty! I like! 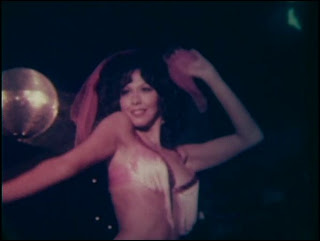 Naughty x 10!
Robert Reed wanted to make sure you knew he was no Mr. Brady.

I always talk about what awesome turns both Elizabeth Montgomery and Barbara Eden took after their sitcoms ended, but I had neglected to mention the incredible film choices Robert made post-Brady Bunch. I was first shown the “Reed-Way” (trademark pending) when I saw the uber-weird and intensely compelling Haunts of the Very Rich (1972) where he sublimely plays an overwrought priest who thinks he just may have entered hell. I realized right then that he was more than just a super nice (and cute!) TV dad. He took really interesting roles in TV movies, making drama…well, dramatic. Recently I saw him in some sudsy goodness known as Thou Shalt Not Commit Adultery, but apparently I was so overcome with Convy-itis I didn’t realize how hunky Mr. Reed truly was. Staying true to form, he abandoned all ideas of a clean cut dad in Secret Night Caller, a disturbing and surprising film all about being obscene… and learning to own that obscenity. No joke. 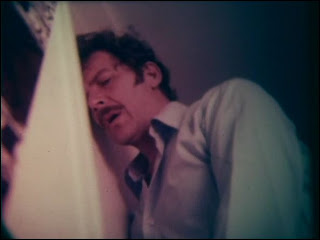 Dee-straught!
Secret Night Caller paints an unapologetically isolated world for Freddy. His wife and his mother-in-law (Sylvia Sydney at her bitchiest) don’t care about anything outside of themselves and even when Freddy tries to confide in Pat, she only thinks of him as depraved – and boy, does he make her pay for that one! It’s easy to see why he’s lost but much harder to understand how he became such a pervert. And maybe that’s the point. Maybe no one can predict what something like a dead end job and a loveless marriage will bring someone to do. Take up scrabble or stalk strippers – it’s your choice.

Penthouse co-produced Secret Night Caller with Charles Fries Productions. Penthouse actually dabbled (so dirty!) in TV movies in the 70s and also produced A Name for Evil (1973) and Secrets of Three Hungry Wives (1975). This was an early Charles Fries Production, but he became a mainstay in small screen flicks until the mid 80s. Intent on staying topical, the next movie Charles Fries produced was called Someone I Touched, which is a loving tale of spreading VD! Ah, the 70s, how I miss thee! 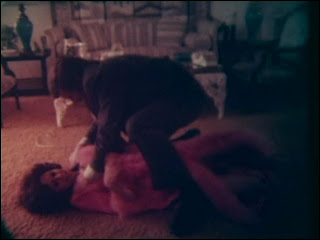 Yikes!
Thanks to a neat site called Articles I Done Writ I came across a link to a Los Angeles Times clipping in which Kevin Thomas praises Secret Night Caller. And that's also where I found this awesome advert: 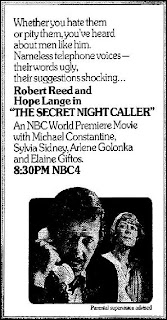 "Take up scrabble or stalk strippers..."

That made me howl. You're funny. Keep 'em coming!

I do have some more reviews. Hopefully two or three this week! Fingers crossed.

Keeping up the funny will be hard though! The pressure's on!

I may never see these made for tv movies in my life, but thanks to your blogs I don't even have to. lol. That line about scrabble was hilarious. We always want to see character motivation, don't we? Why is he such a pervert? I'm surprised there were no disturbing 70's flashbacks from his childhood that gives you an inkling into his current behavior. Oh well, what's the old saying? 'Idle hands are the devil's playground.' He's bored and let's his fleshly desires get the best of him. arrh!

ok - a little after the fact, but, anyway.....I saw this when it first aired when I was ten and have vague recollections of RR slowly picking up a phone reciever (with menacing soundtrack) and then, bang - cut to something else. I guess even Penthouse didn't want to show how heavy RR could get for a made-for-tv flick. When RR was in the stripper's apartment, it may well have been one of my very first masturbatory experiences as she taunts him for being a momma's boy and showing off all the nice furniture, etc. that was funded by other blackmailed chumps. The most memorable part, though, was at the end when RR, literally racking with sobs, confesses to his daughter that he will have to go to a sanatarium, making me experience another first - a conflict between crying and laughing. Around the same time, Dick van Dyke was puking up blood in the sink in "The Morning After", leaving me more disillusioned than ever.

Thanks so much for stopping by and commenting. You remember Secret Night Caller well. I still haven't seen The Morning After, but man I so want to!

This is one of my favorite Robert Reed movies, but he was always so good in his oddball choices.

I work for the estate of Robert Reed, we have been looking for a copy of Secret Night Caller and several more. We can trade for DVD copies of other movies you might be interested in. Please email laleo2010@gmail.com with "Robert Reed" as the subject line. We'd appreciate any help.

I saw this flick when NBC first aired it back in 1975. With that role, and another playing a man undergoing gender reassignment surgery in a two-part episode of "Medical Center", told me that Reed wanted to put as much distance as possible between himself and "The Brady Bunch." Then again, Reed would return to the Mike Brady role many times until the early nineties.

Hopefully, you have been able to see this actual movie by now, as it is on Youtube with very good audio and picture quality I might add! Happy Hunting!