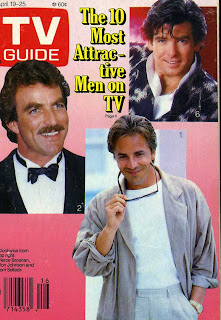 The Year was 1986 and beautiful men were entering our living rooms every night… Now that’s what I call a good year! TV Guide compiled a list of The 10 Most Attractive Men on TV, which was put together by the ladies who were voted The 10 Most Attractive Women on TV in 1984. Some of the lovely ladies polled were:

I have to tell you that I adore this list of women, and wish I knew who the other three rounding out the list were. Of the names I have, the youngest was 31 (Selleca) and as you can see, most of these women were not just beautiful but seasoned as well. Represent!

The ladies gladly pulled out their white hot meters and came up with a pretty great list (One of the rules was that they were not allowed to vote on men appearing on their own shows). The Top 10, in order were: 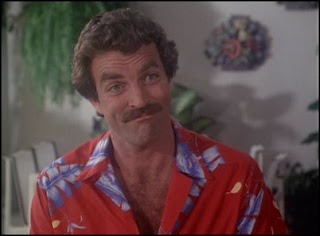 Don't worry Tom, you'll always be #1 on my list

The famous actresses drooled over their choices. Stefanie Powers loved that John Forsythe was “a solid, real human being.” And Linda Evans said Tom Selleck was “amazing looking. He’s tall, he’s beautiful and he takes your breath away.” Although I would gladly put Mr. Selleck at the top of any list I had, Don Johnson is just sooooo 80s, and oozed sex out of every pore. I know that sounds gross, but it's really not...

The runners up were pretty varied as well. TV Guide said that votes also went to Bruce Boxleitner, Michael Gross, Parker Stevenson and Robert Guillaume, among others. What’s interesting is that I didn’t see James Brolin on the list at all. Not one vote for the most gorgeous man who ever ran a multi-million dollar hotel? Wow. Also, I’m just gonna put it out there – I’d like to see Peter Scolari on this list. Honestly, I’d like to see him anywhere. Rawr! Ah, glad to get that off my chest!

And where are my Riptide guys? All three of them, please! 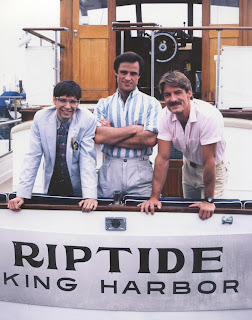 Even Charles Bronson had turned to the small screen in 1986 to make a film that allowed him to show that he had just as much power as an actor as he did in his fists. Bronson starred in a made for HBO movie titled Act of Vengeance and he told TV Guide, “I have often thought how lovely it would be to lean on a mantelpiece with a cocktail in my hand and let the dialogue do the acting.” Bronson was one sexy cat, that's for sure. 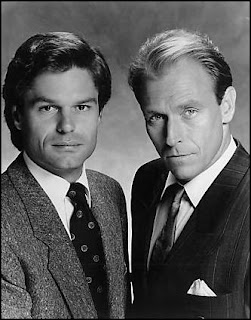 This poll was also conducted just months before LA Law hit our sets. Talk about some hot guys, Harry Hamlin and Corbin Bernsen gave a new, sexy life to the three piece suit.

Was 1986 the pinnacle of TV machismo? I’m starting to think so…

And check out this CBS TV Spot for the 1986 lineup. Hunkadelic!

Lest we forget the hottest game show host of 1986:

I saw the photo of Don Johnson, and knew I had to click on over!

Great list...but...what the heck is Bill Cosby doing on there??? He's a great and funny guy and all, but I'm not sure I would have considered him attractive, at least compared to the other blokes who were on at the time.

Great post...if the list were to include miniseries and TV movies as well as series, then Peter Strauss would have been at the top of my list.

Great. You just turned me gay. Thanks a lot. Now I'll have to buy new clothes! Then again, I'll probably get laid a lot more now. You know what, I take it back. This post is wonderful.

Thanks for stopping by and commenting.

Pam, I was thinking of doing a TV movie/mini-series version. Would take a little research, but it's the kind of research I love... looking at hot guys is my #1 hobby! :)

btw, I've actually seen Peter Strauss in person. Maybe about 10 years ago... He is indeed quite handsome.

Thomas, sorry. Didn't mean to pull you over to the other side! :) And I'm glad you enjoyed the post!

I recall hearing about some guy who studied the shapes of faces, and he considered Connie Selleca's face to be the most proportionate of all actresses. (Basically, he took a ruler to pictures of her face and discovered it wasn't lopsided.)

I'd add Kate Jackson to that list of ladies, myself!

Personally, I find Bill Cosby way sexier than William Devane. But then again, I'm a straight guy, so what do I know? :)

I really enjoyed this post - it was a fun trip back to 1986 and made me think about my 80's crushes which included Selleck, Perry King, Bruce Boxlietner, Pierce Brosnan, Lee Horsley and a few other TV guys.

Hey guys, thanks for commenting!

R.A.M., I believe Jaclyn Smith was considered a perfect face as well because someone folded a picture of her and each side matched perfectly. Those Angels!

Brett, Lol! I am a bit of a Devane freak myself, but I get that Cosby comes across as funny and warm. That's damn sexy.


LaraAnn, Oh boy, Perry King... oh boy! And I had forgotten about Lee Horsley. Another easy on the eyes guy! :)