Don't Be Afraid of the Dark Week... Smoking Allowed! 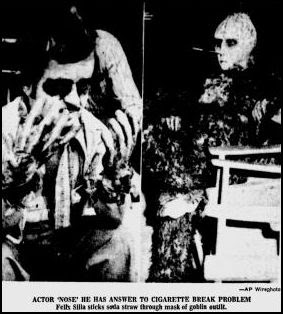 Or at least that was case with Felix Silla who played one of the little demons in Don't Be Afraid of the Dark. According to an interview he did with the Associated Press, Felix had a tough time getting in a good smoke with the mouthless mask. Felix refused to be defeated though and he found a way to get a straw (with the cigarette on one end) through the nose opening and down to his mouth!

And I won't even get into how much he itched.

You can read an interview with him here where he discusses dealing with all things monstrous!

Email ThisBlogThis!Share to TwitterShare to FacebookShare to Pinterest
Labels: Don't Be Afraid of the Dark Week, links, randomness