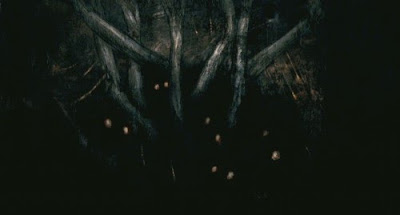 I have waited a long time for the release of the remake of Don’t Be Afraid of the Dark. Like with most re-imaginings I wondered if there was a point, and then I tried to keep tabs on how it was progressing, while checking out teaser trailers and whatever else I could find. I finally decided the remake had fallen into the right hands and I pulled back, trying not to get too much more information. I know I go from hot to cold, but the cold is still kind of hot. What a complicated creature I’ve become.

Anyway, I was finally able to see what I had hoped for and confront what I was afraid of this Friday when I went to catch the remake. Was it worth the wait? Kinda.

Dark is never a bad film, but it’s by no means great either. It has a lot of wonderful stuff, including an incredible house and some really suspenseful set-pieces. It also holds onto many of the things from the original that I love so much, including the ending. It’s different, but also very much the same, and that pleased me. However, the build-up doesn’t amount to the great sucker-punch of the 1973 version. Considering how quickly and cheaply the original was put together, it’s a true testament to how a potentially good film can reach a sort of greatness when placed in the right hands.

That said, I think young people who have no connection to the original will enjoy this reboot. I’m not sure why it’s rated R, but I do think if there are non-jaded tweens in the world (that’s doubtful, I know) they will get a kick out of the modern shenanigans.

I’ve seen fans of the original divided between enjoyment and complete disdain, so I find it a hard film to recommend. But I can say I had a lot of fun and got a thrill out of seeing “Teleplay by Nigel McKeand” in the opening credits! Bravo Nigel! If anything else, the classic version got some respect and for our troubles, we got a new film made by people who loved the original. And it shows.

By the way, it’s worth catching in the theater just to see the lush new trailer for The Woman in Black. Goosebumps, guys. Goose-bumps!

Email ThisBlogThis!Share to TwitterShare to FacebookShare to Pinterest
Labels: Don't Be Afraid of the Dark Week, remakes, Special Blog Post

I don't see many movies in the theater these days - but this and Woman in Black are the two that I have to see in the theater. Thanks for the spoiler free review! I appreciate it! I think I'm gonna see a matinee tomorrow.

Looking forward to this one. If it's from del Torro, it can't be bad ;-)