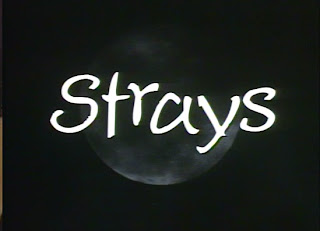 If we’ve learned one thing since the invention of the interwebs it's that we love cats.  Boy do we love cats. If you have a Facebook account I’m sure you’ve seen at least one of a gazillion kitty memes that pop up on an hourly basis. And then of course there are the cat videos. Arguably, there is none so cute as the one with the cat watching a Chuck Norris flick:


Yes sir, we adore cats and we’ve elevated them to a somewhat mythical status as the bitchy constant in our lives. Sure cats give ‘tude, but they give the cute too. How many times have I grabbed my cat and screamed “You’re so cute!” Too many is the answer (just ask my cats!). But during this feline reign of power no one has questioned the darkness that apparently lies within. Well, no one except Shaun Cassidy who wrote the made for TV thriller Strays in 1991. 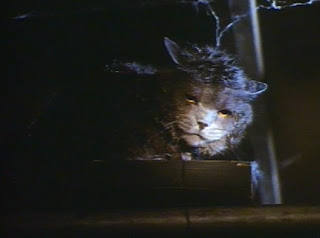 I would name this little guy Mookie

Cats can indeed be a little creepy if you have the right cat actor, and Strays definitely employs one mean mutha (i.e. Mookie), but ultimately while the film is fun it is never really scary. Timothy Busfield plays Paul Jarrett, dedicated husband and successful lawyer. His wife Lindsey (Kathleen Quinlan) is a full time mom and they’ve decided to move out of the big, mean city and make a home out in the idyllic middle of nowhere. The house is a steal (as they always are in these kinds of movies) and as the small family begins to settle into nuclear family bliss, some strange things begin to happen. Just where did that phone repairman disappear to? And what happened to their dog? Well, it looks like some strays have also take up residence in the house and plan to keep it to themselves. 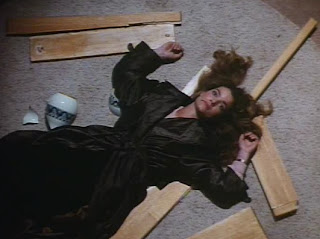 Kitty death
The lead cat is indeed menacing and he perpetrates the violence occurring around the property, but his rag-tag band of kitty misfits are mostly adorable and I think I said “Awww” more times than “Ack!” Alas, anyone who sits down to watch a movie about violent feral cats must be aware of what they’re getting into, and Cassidy’s script, along with some good direction by John McPherson and a straight faced cast make Strays pretty entertaining stuff. Certainly the premise is far-fetched, but I also think if you are willing to just let the movie roll and take it as it is, there’s definitely some rainy afternoon fun to be had. I also think you could probably grab a beer with some friends and have a decent self-made MST3K session, so it’s a multi-purpose kind of movie. However, Strays is never boring. The last third of the movie boils down to man vs. feline and it’s done rather well. Props to Quinlan for playing the role as realistically as possible. She grounds the outlandish into something a lot more tangible, so while it’s loopy as all get out, it’s maintains the suspenseful moments - and there’s a great little tribute to Jaws 2 at the end! OK, that part was definitely hysterical and I do hope one day Shaun does an entire interview about his love of one of my favorite shark attack flicks, cuz I just know in my heart that he wants to. 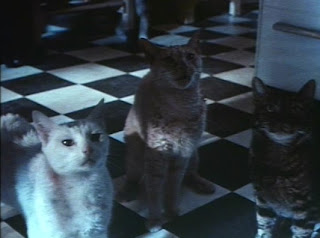 Oh wow, I forgot about this one. I remember it now. I just better not watch it with my new cat since he might get ideas. ha