What I'm Waching Now (and Why I'm Not Blogging as Much): Hart to Hart, As the Hart Turns 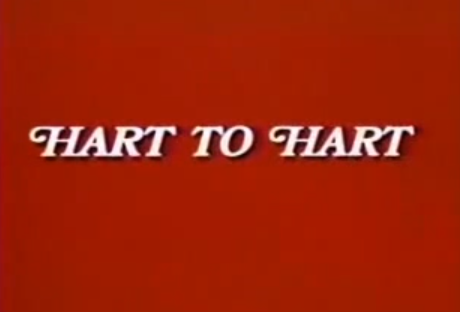 I’m not sure anyone keeps track of these things, but I haven’t been posting as much lately (although my facebook page is hopping, so remember to stop on by and like it!). This is because I am, yet again, in the throes of another interstate move. Since 2010, I have moved from California to Maryland to Pennsylvania, and now I’m heading to Texas. Austin, that is. And despite the fact that I’ve unloaded about half of what I used to own (I do miss you, VHS), I’m still packing like a madman, and I haven’t found much time to write or even to watch a full movie.

Thankfully, there is so much episodic television that I need to visit and revisit, and those little 45 minute bursts of delight have been getting me though every box-building day I’ve had over the last two weeks or so. I have enjoyed many shows in this brief time, marathoning everything from Happy Days to Trapper John to General Hospital (there is nothing quite like binge watching a soap. My dreams are filled with melodrama). So, why not Hart to Hart? It was definitely one of my favorite shows when I was a kid, and, honestly, it remains so today.

And speaking of soaps, there is one Hart to Hart that always makes me squeal with delight. The episode is titled As the Hart Turns and originally aired in the fourth season on March 1st, 1983. I love this episode mostly because of the way it playfully handles the soap genre within the series own mystery format. And I always love how Jennifer manages to find herself in these random, but somewhat glamorous, pickles.

As the Hart Turns goes behind the scenes of a popular soap called Doctor’s Hospital, a show that almost everyone on the planet watches. Max (Lionel Stander) is one of the serial’s biggest fans and he lures Jennifer (Stefanie Powers) into its clutches. Before you know it Jonathan (Robert Wagner) can’t get a word in edgewise between 2:30 – 300 every weekday. It is certainly kismet when Jennifer wins a raffle to appear on the show. As you can guess, she’s a natural, but her journalistic knowhow is what gets her a job as a writer on Doctor's Hospital (as if it was this easy… I do love you 80s TV). She’s really there to help the head writer iron out the bumps in one of the stories, but before you know it, she’s working on the juicy murder mystery that will kill off one of the main characters. And that actor ain’t so happy about it. Mystery and intrigue hijinks ensue.

This episode uses a few friendly daytime faces, including John McCook (The Bold and the Beautiful) and Leann Hunley (Days of Our Lives), but more importantly, it reveals how omnipresent the soap genre was in the mid-80s. Hart to Hart was often exclusively about the rich and powerful, as the gorgeous couple jet setted around the world, solving mysteries that were often tied to well-to-do evil doers. Their Jack-of-all-trades employee, Max was the everyman, but he was also a gambler, and lived a bit of the high life himself, as noted with his stubby cigars and penchant for the ladies. But in this particular episode, Jennifer and Max are bonded by their love of Doctor’s Hospital. Although Max was always close to the Harts, this was an interesting approach at breaking down their economic barriers. And Doctor’s Hospital pervades into every other walk of life too, from the exquisitely rich to the humble middle class, all linked by their desire to know who really killed Diana (which of course, we the real audience never find out, darnit).

What is the lesson Mrs. Hart learned that day? Can soaps really bring the world together? Why yes, Jennifer, they can.