Small Screen Scream Queens of the 1970s: The Countdown (Part One) 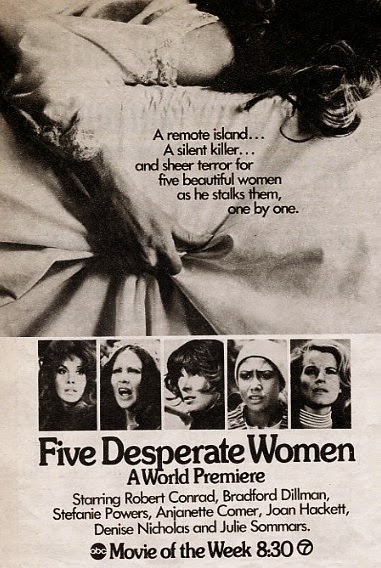 Note: this article first appeared on Pretty Scary's website, which is sadly no more. Because of its length, I am splitting it up into three parts, and making it a countdown, although my rankings are somewhat arbitrary. There will also be a new follow up piece featuring a few more actresses I feel deserve a little bit of love. Enjoy!

It would be difficult to pin a label on the women mentioned in this article. All are gorgeous, strong, and smart and each imbues something unique that made them so original in the first place. But one fact ties these vixens, girls-next-door, spinsters and housewives together - All are Small Screen Scream Queens. From 1970-1979 this fine assortment of talented ladies took over the boob-tube (pun intended!) and created memories long held dear by latch key kids everywhere. 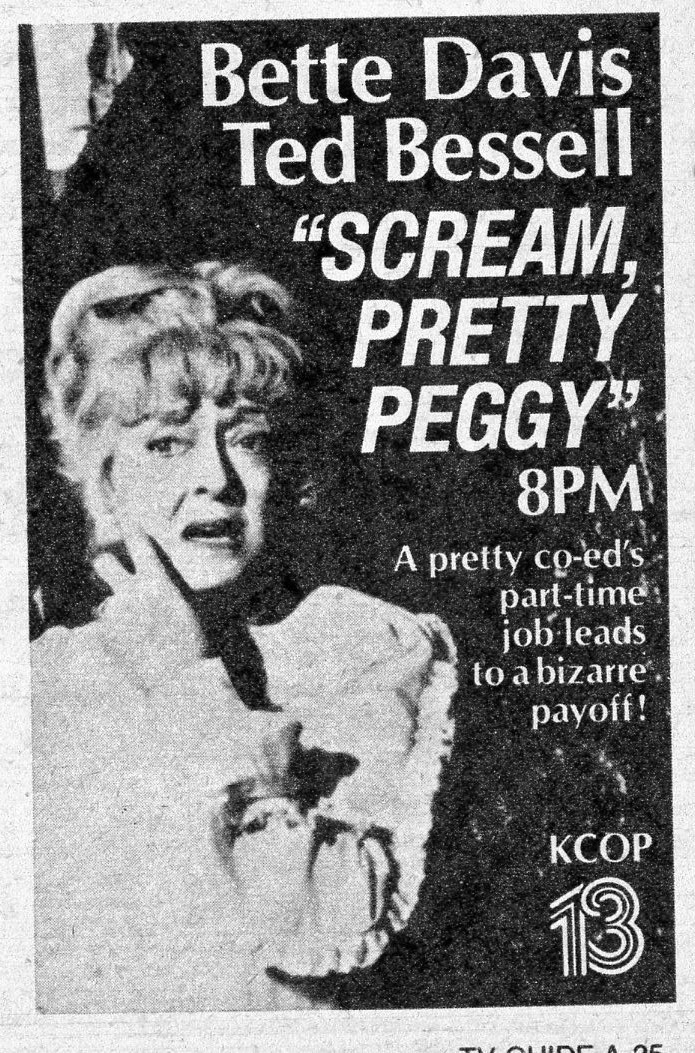 Moreover, they became icons of an era sadly long since passed. The Made for TV movies of the 70s provided a unique contribution to the genre and have actually created a sub-genre all their own.

Just what makes a Small Screen Scream Queen, you ask? Since not much attention has been given to this sect of pop-culture, I though I’d explore the qualifications here. 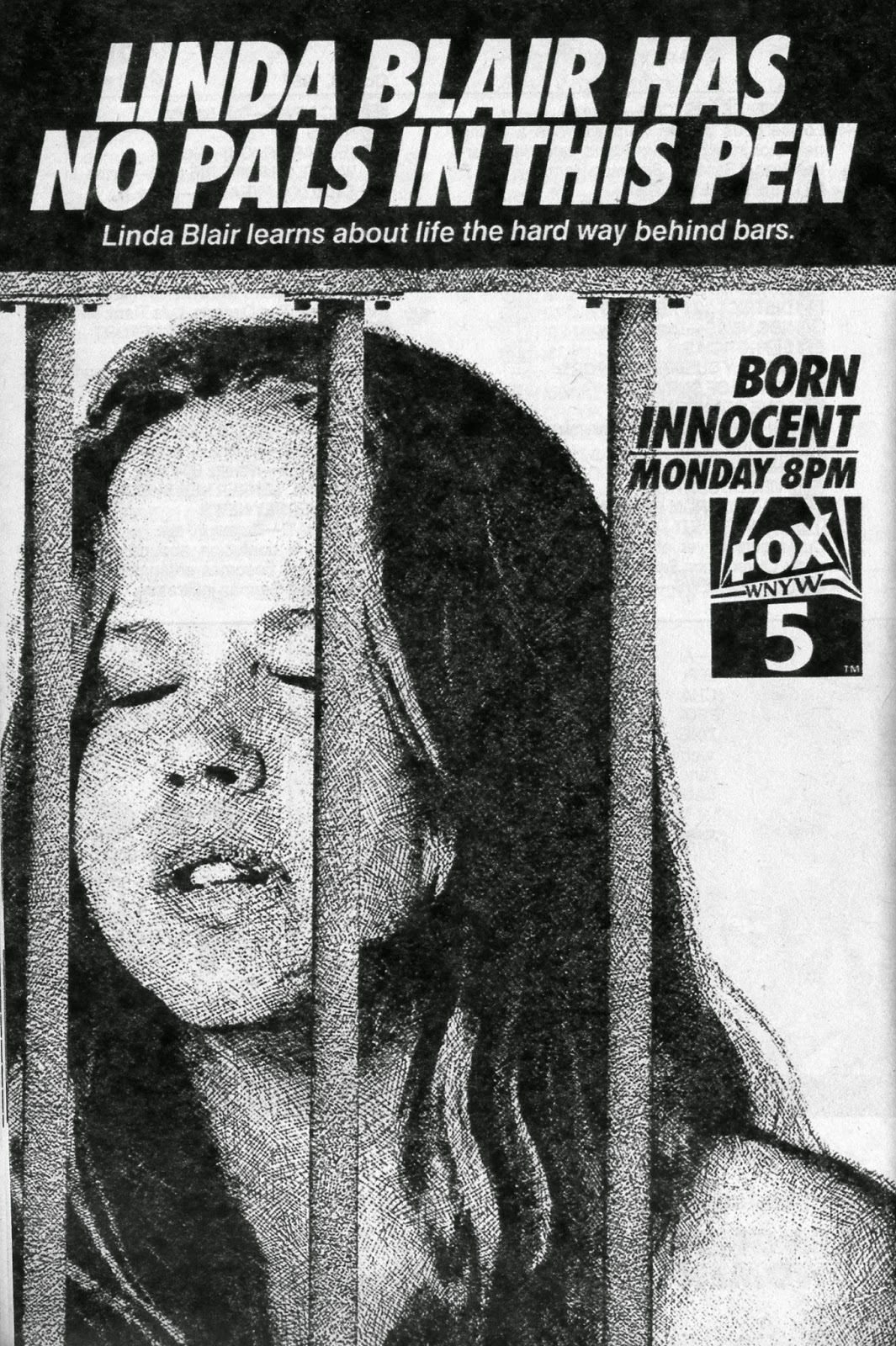 First, she should be in more than one TV Thriller/Horror movie and should hold some sort of iconic stature within the genre. This of course is flexible since so many recollections of these long-forgotten (by some, at least) films are based mostly on childhood memories.

Second, the characters should be strong. They can also be kooky, flighty, funny, serious, sexy, irritating, etc, but they must overcome the odds (or at least try pretty damn hard) to complete the task at hand and rid the world of ‘The Evil.’

And finally, these women should be hot, hot, HAWT! 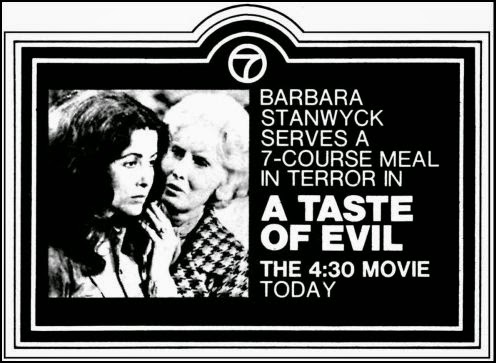 Although my foray into the world of 70s TVM horror is constantly expanding (the more you know the less you know, right?), I give to you a list of women who represent the finest the small screen had to offer. Perfect diction, impeccably dressed, an ability maintain an extravagant lifestyle with no means of income (i.e. what exactly was their job?) and strong as hell, these women ain’t gonna take it any more!

A total of 34 actresses made my list, 3 of which were honorable Mentions simply because they had not made enough genre TVMs to qualify, but I loved their work in what they did, and heck, this is my list. So, going backwards, to #1 (based on a Scream-O-Meter I devised, mostly for laughs), here we go: 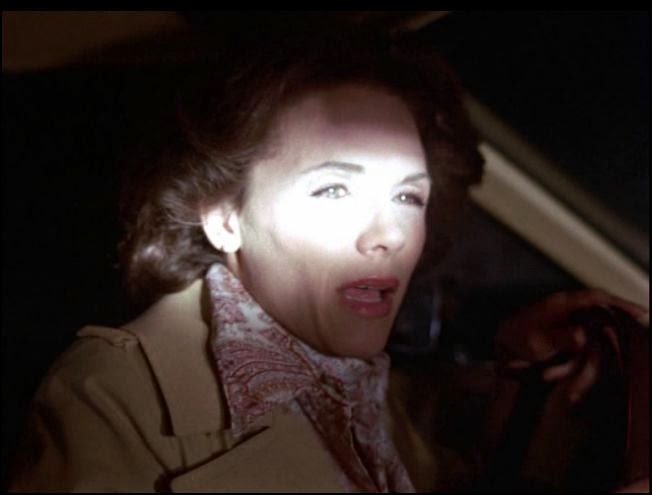 Valerie Harper (1940 - ) – Harper charmed the world as the optimistically single Rhoda Morgenstern on The Mary Tyler Moore Show. That got her a show titled after her character but her genre TV Movie credits proved she was an actress capable of something other than comedy. Night Terror still remains one of the creepiest films ever to grace the small screen. Hapless (and fairly helpless) housewife Carol Turner crosses the desert plains en route to her hubby only to be stopped by a crazed gun dealer with a voice box (I ain’t making this up kids!). When she witnesses a murder, it begins a chase across the great divide. And we were glued to our seats! 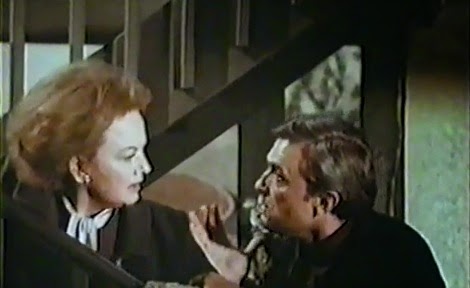 Olivia DeHavilland (1916 - ) – A living legend., Olivia’s grace and beauty insured her A list status when she wowed audiences in Gone with the Wind. Although she maintained an eventful career, she seemed to work only when it suited her, before retiring in 1988. The small screen embraced her during her twilight years and she appeared in such noteworthy works as Roots and North and South. But it was her performance as Laura in The Screaming Woman that gets her name on this list. An eerie and simple film, Olivia brought a sense of old school talent and like all great actresses practically carried the movie on her back. Her elegance helped push an undemanding film up from the depths of made for TV hell. 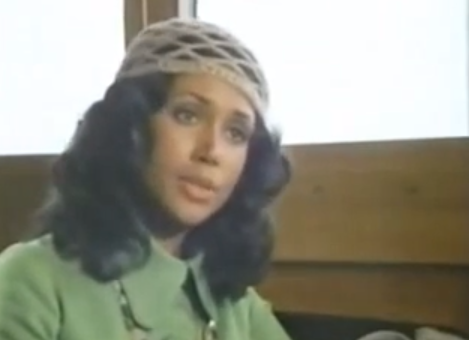 Denise Nicholas (1944 - ) – Denise only made on TV thriller, but in it she gets to play a Final Girl who is a call girl! Hats off to Denise for always bringing depth to her parts! 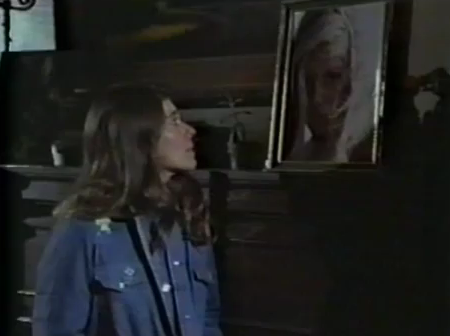 31. Sian Barbara Allen (1946) – Oddly pretty Sian is probably best known as Jenny Pendleton, John Boy’s first love on The Waltons. She spent the better part of the decade working on television, spinning her deceptively alluring charms, before she disappeared into relative obscurity. We miss you! 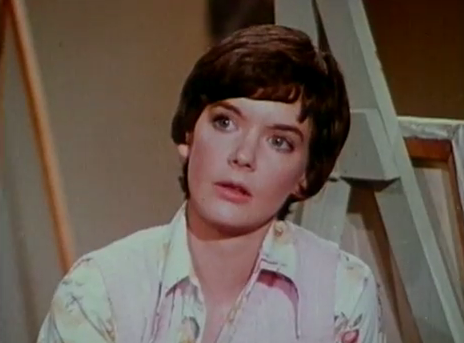 30. Pamela Franklin (1950 - ) – Petite and pretty Pamela dreamed of becoming a dancer but fell into acting. She was no stranger to horror either – her film debut came in 1961 in a version of Henry James classic novel Turn of the Screw called The Innocents. She worked on through the 70s before retiring in 1981. Happily married and enjoying life out of the spotlight, Pamela left just enough good horror on her resume to leave fans wanting more. 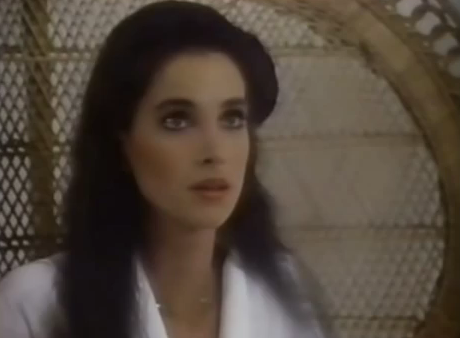 29. Connie Selleca (1955 - ) – This gorgeous brunette is probably best known as playing Mr. Hanley’s prettiest pal on The Greatest American Hero in 1981, but by that time, Connie had already racked up an impressive list of credits. She didn’t get started until 1978, but made up for lost time with her debut as the beautiful and cursed water nymph in the mystical TVM The Bermuda Depths. Less a horror film than a dark fairy tale, Depths is one of the most haunting television movies of its time. 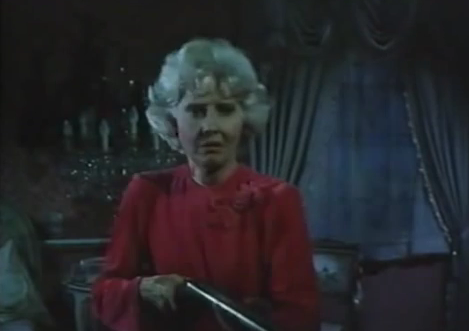 28. Barbara Stanwyck (1907 – 1990) – Barbara effortlessly moved her Oscar nominated career into television, even starring in her own anthology show (The Barbara Stanwyck Show, 1960). In the 70s, she only starred in two made for television thrillers, but like many of the golden greats listed above, she brought richness to roles that might otherwise be considered secondary in a lesser actor’s hands. After these movies she took her popular character Conny Colby Patterson to from Dynasty to The Colbys. 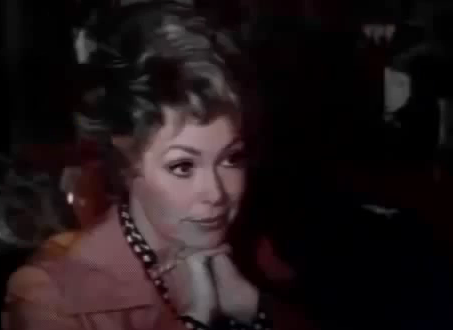 27. Barbara Rush (1927 - ) – This A List actress starred along side such tasty leading men as Marlon Brando, Paul Newman and Richard Burton in the 50s, but settled for the small screen in the 70s. She still got to support the talents of scrumptious men like Paul Burke, Bradford Dillman, and George Hamilton and her charm brought that sense of strength films with titles like Death Car on the Freeway so richly needed. 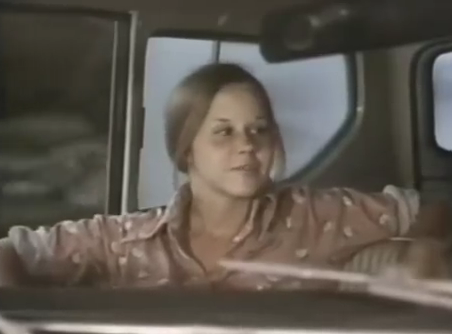 26. Linda Blair (1959 - ) – Bubbly little Linda Blair has never been a stranger to the darker side of cinema. When she was just knee high to Satan, she was spitting up pea soup and it made her a household name. Linda also starred in some great television movies, and always played the spunky teen (except when she was raped with a broom handle in Born Innocent! That kind of took the spunk right out of her!). Her adorable curly locks and sweet as pie smile made her America’s Sweetheart of the Macabre, a title she richly deserves. 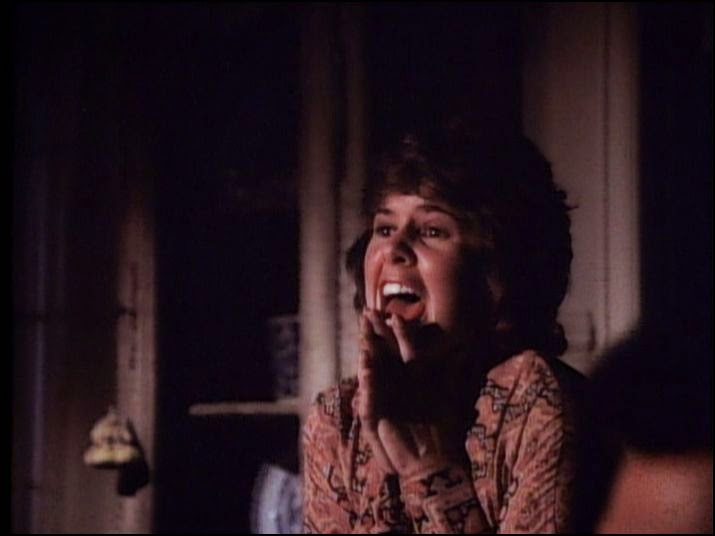 25. Kim Darby (1947 - ) – Untypical of the normal Hollywood starlet, Darby set about finding fame by playing unique characters that served a purpose other than eye candy. She found fame as the tomboy cowgirl in True Grit, winning accolades. She only appeared in two genre TV Movies, the first being the ineffectual Francis Ford Coppola supernatural tale The People. But her second attempt at a paranormal thriller marked her iconic stature. Don’t Be Afraid of the Dark remains one of the most sought after TV Movies of that era. Darby plays a dowdy housewife who runs afoul of some devilish little creatures in her new abode. Darby’s performance of a woman quietly being driven mad is only heightened by the movie’s gut-punch ending. It only took this one movie for Darby to steal the bloodied hearts of TVM nuts everywhere. 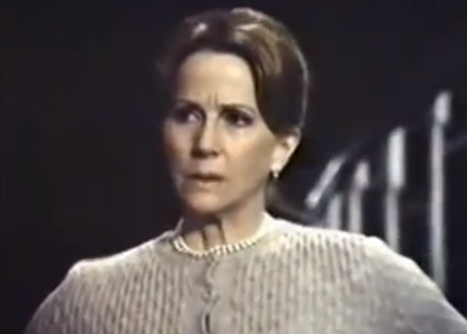 24. Julie Harris (1925 - 2013) – Wonderfully awkward Harris was perfect at playing spinsters. Her plain yet compelling looks personified loneliness. And she was a highly praised actress by the time she moved over to the small screen. Having already won the hearts of horror hounds with her elegantly painful performance in The Haunting, she seemed a perfect choice for put-upon, lonesome characters fighting against the grain. You instantly wanted to take her home, give her a cup of tea and let her know it was going to be alright. But Harris was alright; in fact she was better than alright. Though she only appeared in a few TVM thrillers, she chose them wisely and has endeared herself to fans world over. 23. Jessica Walter (1941 - ) – Jessica played the psycho-bitch from hell in Clint Eastwood’s mini-masterpiece Play Misty for Me and it made her a star. Her depth of effortless maliciousness also spread over to the small screen where she contributed to some bona fide scares. Julie’s incredible performance as drunken Freddie in Home for the Holidays insured her place in television movie infamy. She even took on the Women in Prison subgenre in the tele-film Women in Chains, which starred Ida Lupino as an evil warden and another Small Screen Scream Queen, Belinda Montgomery! And that was just the beginning. Ms. Walter stayed away from television exploitation for awhile but came back with a bang in the ultra-glamorous small screen slasher She’s Dressed to Kill. She then went on to play Robert Mandan’s bitchy ex in the Three’s Company spin-off Three’s a Crowd! Now that’s scary! 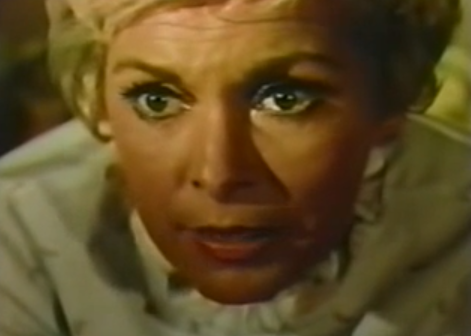 22. Janet Leigh (1927 – 2004) – Ms. Leigh was already an established Scream Queen when her time in television movies rolled around, with the most famous shower scene in history. On the small screen, she didn’t shriek quite as loudly, but still brought that sense of dignity to every production she appeared in. 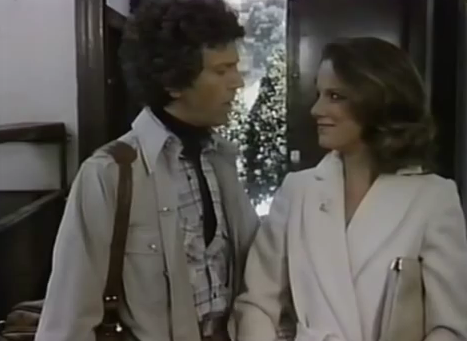 21. Gretchen Corbett (1947 - ) - The name might not ring a bell, but Gretchen was all over the airwaves in the 70s. Her odd beauty and whip smart sensibilities made her a favorite recurring character on The Rockford Files (she played his lawyer Beth Davenport). She also graced other remarkable TV series from that decade such as Columbo, McMillan and Wife, and Banacek (all of those shows that aired under the moniker The NBC Mystery Wheel). She was no stranger to horror either. She started off early with an appearance in John Hancock’s masterpiece Let’s Scare Jessica to Death, but it was the small screen that kept beckoning. She was featured in both The Savage Bees and the glamorous television thriller She’s Dressed to Kill. For whatever reason, Gretchen never became the huge star we know she should have been, but the filmmography she left behind would make even the most seasoned actors jealous.

Stay tuned for part 2, which will be posted on July 16th!
Posted by Amanda By Night at 9:03 AM

Looking forward to the rest of this list! (I think I know who might top it--she's certain to make the top 3, but I'll keep this pick to myself and see if I was right :) While Denise Nicholas only made the one TV Movie scream appearance, she did have a pivotal role in a very unsettling NIGHT GALLERY episode, "Logoda's Heads". She should get some kind of extra credit for that one, stayed with me for years.