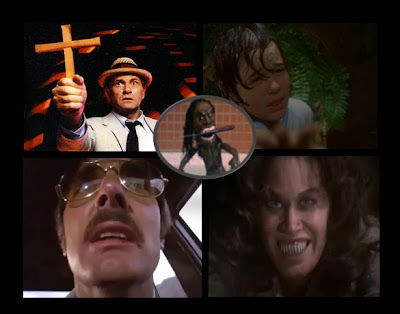 When it comes to made for TV movies, it’s not often that I’m at a loss for words. But here I am thinking about what I’d like to say about the great Richard Matheson, and I can’t seem to form my thoughts into any sort of coherence. He was a wonderfully talented man who brought so much entertainment to the world as an author and screenwriter. I have indeed read many of his short stories (starting with Born of Man and Woman, which as it turned out was his first published piece), but I know him best for the work he brought to the small screen.

My first exposure to the greatness of Matheson came in the mid 1970s when, on one balmy Saturday afternoon, I came into the house for lunch. My parents were watching the Afternoon Movie and seemed transfixed by whatever was on the screen. From my point of view, I could only see their faces and the back of the TV. As I walked towards them, I distinctly remember turning around and seeing a woman running hysterically around her apartment. I was probably about seven at the time, and as with any kid that age, I was instantly drawn into the scenario playing out on the screen. I don’t think anyone in the room moved until the credits rolled, and at that point I was near tears. I had no idea what I’d just experienced, but to think that such terror could exist when the sun was shining so brightly outside, brought a new sense of fear into my life (I had a similar experience when I was even younger watching Don’t Be Afraid of the Dark, that I’m only now recalling as I write this), and, needless to say, I loved it! 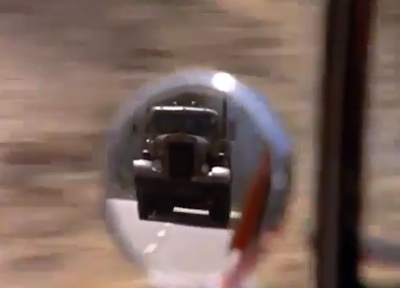 Eventually, I came to see the entire Trilogy of Terror film, and always loved when it would show up on the local channel. During this time, in the late 1970s, Matheson was all over the television, although I’m sure I had no idea I was watching his work at the time. I have distinct memories of being enthralled by Duel, loving the Martian Chronicles and gasping in terror during William Shatner's major freak out in the Twilight Zone episode Nightmare at 20,000 Feet. I had no idea all of these great stories came from one brilliant mind. In fact, I’m not really sure when I made the connection, but it was probably as a teen when I was beginning to venture into the world of slashers and other late 80s stonewashed horror madness. The fans of those films always brought up Matheson, Dan Curtis, demented fetish dolls, and of course, Kolchak. As I started digging back into my dusty childhood memories, I was astonished by all the Matheson stuff I had seen growing up. And of course, I was still seeing it. From Jaws 3D (I know, what’s up with that one?!?) to Stir of Echoes, I was constantly pleased by the Matheson output (and yes, that means I love Jaws 3D, even if Matheson didn't).

In the early 2000s, Matheson spoke to one of my horror writing classes. He was a bit frail, but very kind and signed everything the students brought for him. What I remember most about his talk was that he encouraged us all to avoid saying the word “try.” He said if someone asks you if you are a writer, just tell them you are, never say “I’m trying to be one.” I can’t even imagine how many great writers have surfaced thanks to Matheson’s inspiration.

Here's a look at some of my favorite Matheson tele-films: 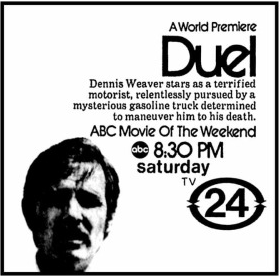 Duel (1971): This certified classic originally aired as an ABC Movie of the Week on November 13th, 1971, and the world didn’t know what hit them. Directed by a then-unknown Steven Spielberg, and written by the master of suspense, Richard Matheson, Duel pits David Mann (Dennis Weaver in top form) against a malevolent truck with an unseen driver. Sometimes referred to as the Jaws of the highway, this film certainly positions man against the unknown, and manages to make the long stretches of road feel about as claustrophobic as a boat that may need to be bigger. This is perfect filmmaking. End of discussion. Duel is on DVD!


The Night Stalker (1972)): Based on the unpublished manuscript The Kolchak Papers by Jeff Rice, Richard Matheson brought vampires into our homes on January 11th, 1972 in another ABC Movie of the Week. Although Kolchak would go on to become a beloved small screen figure (and inspiration for The X-Files), according to The ABC Movie of the Week Companion, Darren McGavin thought the series was not going in the right direction. Saul Fischer says, “He felt like it should have been The Fugitive with Kolchak chasing the undead, as opposed to the monster of the week format.” However, before the series, the movie was a knockout success. Even by 1980, eight years after the film’s initial release, it was ranked as the 27th highest rated movie to air on television (tying with The Ten Commandments Part One!). This was also the first team up for Matheson and the great Dan Curtis (Curtis produced, and the other small screen great, John Llewellyn Moxey directed). Click on the link to buy the DVD!

The Night Strangler (1973): Dan Curtis replaced John Llewellyn Moxey in the director’s chair for this ABC Movie of the Week, which originally aired on January 16th, 1973. The sequel features Kolchak chasing after a 100-year-old alchemist who is draining women of their blood. According to IMDb: “Director Dan Curtis and screenwriter Richard Matheson had actually planned to do a third Kolchak movie set in NYC. In New York, Kolchak was going to discover that Janos Skorzeny - the vampire from the first film - was not only not dead, but active again! This film was going to complete a planned trilogy of Kolchak movies, entitled The Trilogy of Terror.” What could have been (and what was, considering they eventually made a Trilogy of Terror)! Pick up the Night Strangler on DVD!

Dying Room Only (1973): I was introduced to Dying Room Only pretty late in the game, when a friend (intensely) recommended I see it. He was right, and I couldn’t believe I had gone all those years without laying my eyes on what I consider a pretty perfect little suspense film. What works best about this ABC Movie of the Week that originally aired on September 18th, 1973 (because so many things do work) is Leachman’s everywomen character. I was with her through the entire ordeal, and felt every second of fear and frustration that she encountered. I’m sorry I didn’t see this when I was younger, but Warner Archives has righted a wrong, by making this little film available on DVD for anyone to see. And anyone means everyone, because it needs to be seen. Click on link for my review.

Scream of the Wolf (1974): I just saw this one last summer as a double feature with Moon of the Wolf. This was another re-teaming of Curtis and Matheson, but to lesser results. The cast is great (and of course, I have to give a special nod to Phil Carey who always makes me smile). The movie, which was yet another ABC Movie of the Week and aired on January 16th, 1974, was based on a short story called The Hunter by David Case. Ultimately it feels like a riff on The Most Dangerous Game, and lacks that oomph that normally made both Curtis and Matheson so fascinating. Still worth a watch for the cast. But Scream of the Wolf on DVD! 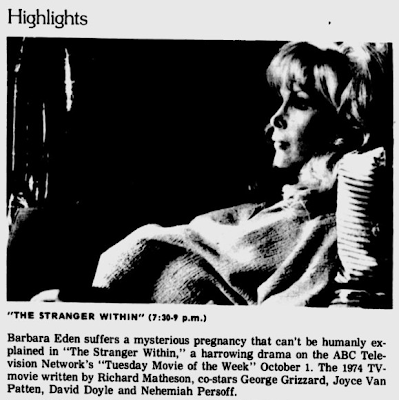 The Stranger Within (1974): Wow, the ABC Movie of the Week definitely loves Matheson! The author adapted the tele-play from his own short story, and it’s a doozy (both versions)! Stranger, which originally aired on October 1st, 1974, is no political thriller, but it certainly speaks to many of the most pertinent issues of the era as it taps into all of those motherhood anxieties, plays on the fear of hospitals and subtly comments on Roe v. Wade. It’s also beautifully shot, wonderfully creepy and led with dignity and style by Barbara Eden. It’s must see TV for sure (or at least must see DVD)! Click on title for review.

Trilogy of Terror (1975): It shocks me that I have never written a proper review of this ABC Movie of the Week, which originally aired on March 4th, 1975. Probably because it’s so famous, and so well regarded that I can’t imagine what I could possibly add to the pot. That said, I think the first two segments, Julie and Millicent and Therese probably deserve a little love, and now I’ve inspired myself to get back on the ball. OK, at any rate, this is probably my favorite film on this list, because that doll obviously had a heady effect on Amanda By Night’s love of horror. Go Zuni! Buy Trilogy of Terror on DVD! 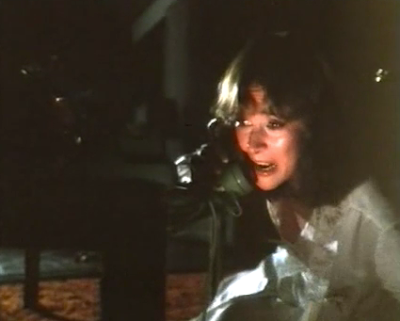 Dead of Night (1977): Richard Matheson and Dan Curtis teamed up yet again for another anthology that aired on NBC on March 29th, 1977. Much like Trilogy, it's the final segment that everyone terrifyingly recalls. Bobby is one knock-down drag out short that still gives me nightmares. In some ways it’s damn Zuni-esque, but that’s all I want to say in case you haven’t seen it. Click on title for review. And click here to buy Dead of Night on DVD.

Here are some links that will lead you articles on Matheson’s life and work:

Tor.com has a wealth of info on Matheson. A must read.
Here's a link to the New York Times obit.
i09 pays tribute to Matheson.
John Kenneth Muir has written a series of articles on Matheson's career. 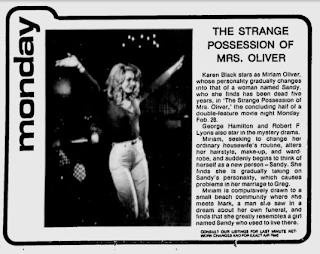 I desperately wanted to writing something about The Strange Possession of Mrs. Oliver, but it's been so long since I've seen it, it is only a hazy memory. This one is sitting pretty high on my "To (Re)Watch" pile, so hopefully I can give it some proper love soon.
Posted by Amanda By Night at 2:47 PM

I am sad to hear of Richard Matheson's passing. He wrote some of my favorite Twilight Zone episodes and of course my beloved, Somewhere in Time. Rest in peace, Richard.

Awesome tribute Amanda. It wasn't a tv movie but Legend of Hell House is a favorite of mine. He lived a full and creative life. Rest in peace.

I believe his son is an author too.

Thank you so much for stopping by to share your sadness over the passing of Mr. Matheson. He was truly a one of a kind genius.

And you're right Dylan, Richard Christen Matheson is also a writer. I haven't read any of his stuff, but perhaps I should look him up.

I think Chris Matheson, co-writer of Bill and Ted's Excellent Adventure, is also one of his sons.